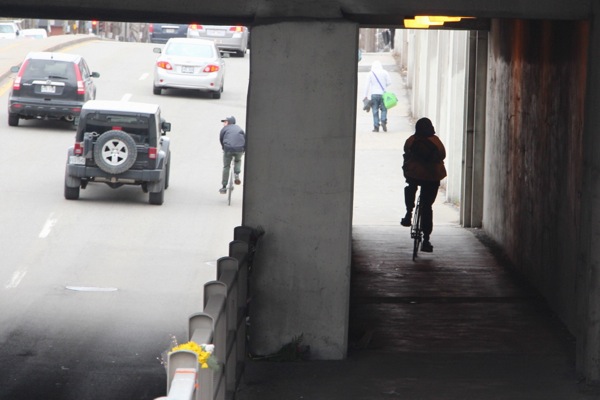 Which of these options is safer: Sharing a narrow lane with a car, or a narrow sidewalk with pedestrians?

The accidental death of a cyclist riding a Bixi through an underpass on Saint-Denis St. got to me. Because I’ve ridden a Bixi through that underpass (under Des Carrières St. and a railway line) many times going to and from work, and I’m aware of how dangerous it is.

We don’t know the details of the accident yet. Did she fall off and then get hit? Was there a collision? Did she veer into the truck or did it hit her from behind? It’s important to figure this out not so much to assign blame, but to determine what safety measures are at issue. 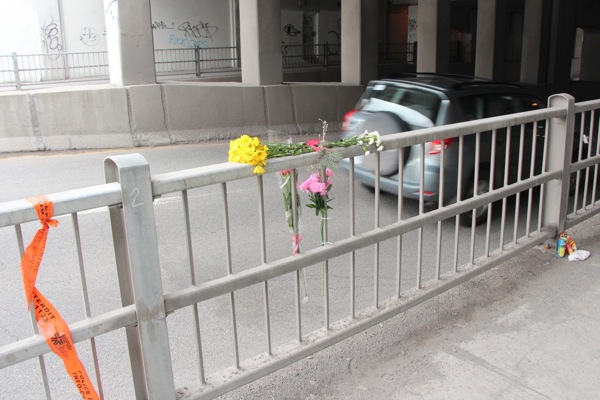 Flowers and other objects mark a memorial to a cyclist killed at a St-Denis underpass.

The death was controversial because right next to the accident scene was a sidewalk with bollards preventing cyclists from using the sidewalk. In this case, at least, had the cyclist used the sidewalk, she probably would have lived.

So in response, elected officials acted quickly, removing the bollards and announcing plans to allow cyclists to use the sidewalk through these underpasses. The mayor of the Rosemont borough announced that new signs were installed Friday morning allowing cyclists to share the sidewalk with pedestrians.

This applies not only at St-Denis, but at similar underpasses below that rail line where there is no bicycle path, underpasses that have been described as “tunnels de la mort”.

But is that really a better solution? To find out, I grabbed a tape measure and headed down to the underpass to measure the width of the sidewalks. (I ended up running into a guy doing the exact same thing while I was there.)

The underpass in question has two lanes of traffic in each direction, and a sidewalk on each side. Supporting pillars separate the sidewalks from the traffic lanes, and the two sides of the street. This makes adjusting the size of any part of this impossible without major structural modifications. 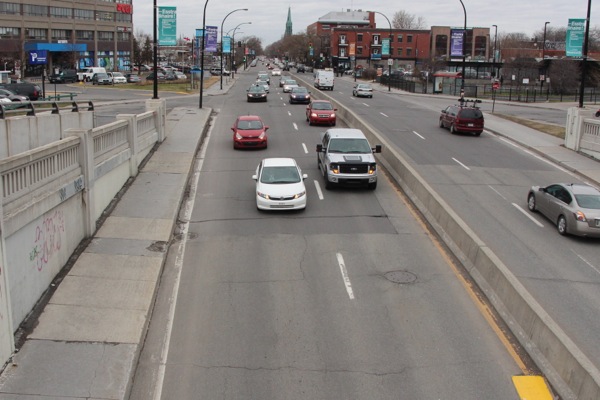 Saint-Denis St. narrows from three lanes to two as it descends into the underpass.

What’s particular about Saint-Denis here is that in each direction, the road narrows from three lanes to two. It’s not a huge problem for traffic — going northbound, the right lane has parked cars before the underpass, and going southbound, there’s a bus stop and a turnoff just before the road narrows.

But it presents a safety issue for cyclists. As you can see from the photo above, right at the top of the hill, the road has two lanes, but the right lane is significantly wider than normal. This leaves plenty of room for a cyclist and a vehicle side by side. 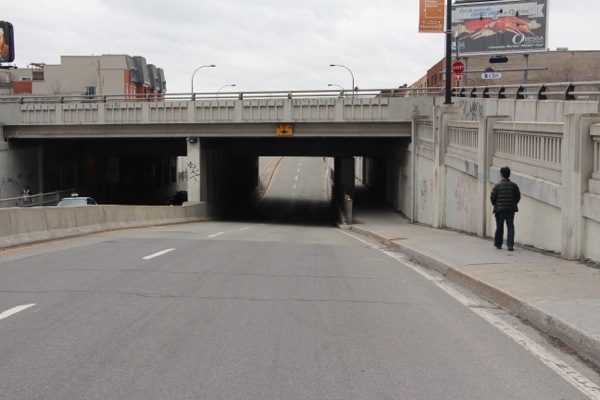 The right lane on Saint-Denis St. narrows as it approaches the overpass.

But as the road descends, it narrows by about three and a half feet, by my calculations. That comfortable space allowing the two vehicles to travel side-by-side disappears. And it does so as the vehicles are accelerating. Through the underpass, there are simply two lanes of traffic, neither of which is very wide. A standard-size car and a cyclist can fit in the right lane, if the car keeps to the left of the lane and the cyclist stays to the far right, but it’s not wide enough for the two to be very comfortable there.

So what about the sidewalk?

There, we have a different problem. The side wall remains parallel to the roadway, so as the street gets narrower, the sidewalk gets wider. It goes from six feet wide at the top to nine feet wide at its widest point, just before the railing appears.

In the southbound direction, the one in which the cyclist was killed, there’s a wide pillar between the road and the sidewalk, which causes the sidewalk to narrow even further. There are also some outcroppings on the right side as well.

At its narrowest point, the sidewalk on the wast (southbound) side is only 73 inches, or 1.85 metres, wide. And because there are pillars on either side, there’s no room for the handlebars to hang over the edge of that space.

For cyclists (even if we limit them to one direction) and pedestrians to share this sidewalk, there would need to be room for the cyclist to pass the pedestrian.

A Bixi bicycle’s handlebars span 26 inches, or 0.65 metres, from tip to tip. That’s pretty similar to the handlebar span of most bikes. But since the right handlebar won’t be scraping the edge of the pillar, we need to add margins. Bike lane design specifications, such as this one for Hamilton, suggest at least 0.2 metres on either side, and preferably 0.4 metres. At 0.2 metres, the total width of the bicycle lane would be 1.05 metres, or 57% of the total width of the sidewalk. At the preferred 0.4 metres, it would be 1.45 metres, or 78% of the sidewalk. And that’s assuming nobody’s on a bike wider than a Bixi.

Considering the area in question is where cyclists are travelling at high speed, and may need to manoeuvre around things like potholes or manhole covers, the wider option would seem to make sense.

Just about anywhere I could find in city plans list bicycle path widths as 1.5 metres, or 1.8 metres, with the former being more common. Sticking to even the smaller of the two widths would take up 81% of the sidewalk, leaving about 14 inches of space for pedestrians. My shoulders are wider than that, so I’d need to walk sideways. At 1.8 metres, I’d have 5 cm of space left over, or two inches. Not enough space for a business card.

There is no perfect solution to this problem, so let’s say we compromise, and give the cyclist the absolute minimum of 0.2 metres on either side. Assuming a maximum handlebar width of 0.8 metres, that means a total width of 1.2 metres, leaving 0.65 metres, or 26 inches, left over.

That might work. If cyclists only travel in the direction of traffic on each side, and if there are no potholes or other obstructions and if all pedestrians travel in single file and if nobody has a wide stroller and …

I find it hard to believe that this can be considered safe, especially when the cyclists will be travelling through this area at high speed. 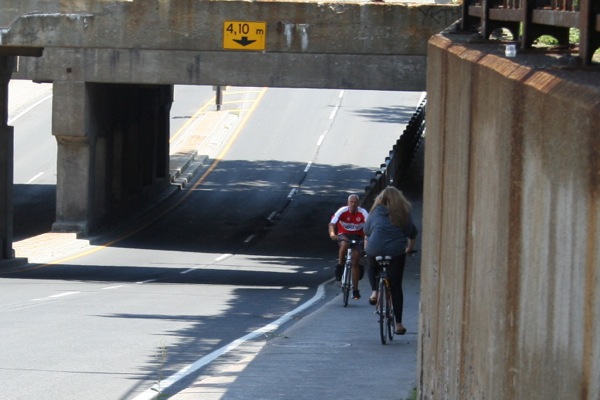 This photo, taken in the summer of 2009, shows why I dislike this idea so much. It’s a few blocks east, at the underpass of Christophe-Colomb Ave. At the time, cyclists along the Route Verte were told to take the sidewalk through the underpass, which links a bike path at Parc des Carrières and one that goes through Laurier Park. I took that underpass many times, and in fear each time.

There, the sidewalk is only six feet wide at its narrowest point, about the same as St-Denis. Except here, the cyclists were travelling at high speed in both directions, navigating through potholes and pedestrians. It astounded me how any city could think this was even remotely safe. 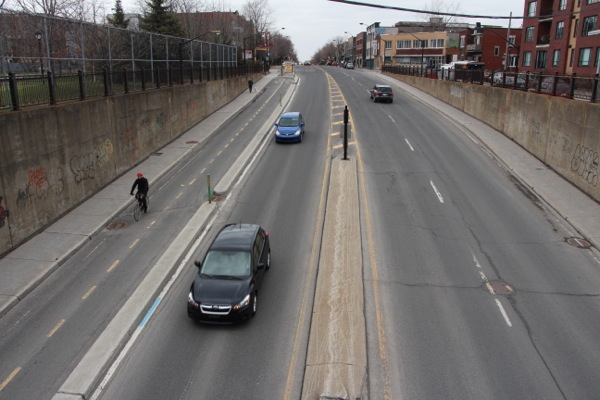 Fortunately, in 2010, common sense prevailed and the city constructed a separated two-way bicycle path on the roadway. It had to sacrifice a lane of southbound traffic to make it work, but it was a lot safer for everyone.

Unfortunately, this isn’t a practical solution for Saint-Denis. Unlike Christophe-Colomb, which ends just south of this underpass, Saint-Denis is an important artery, which already narrows from three to two lanes to go through this underpass. Narrowing either direction to one lane isn’t realistic. And because of the position of the pillars, widening the sidewalk or making the vehicle lanes narrower isn’t possible either.

Everyone seems to agree that the real solution is to get more bicycle crossings of the railway. And they blame Canadian Pacific Railway for dragging its feet to create more level crossings so cyclists can avoid this entirely. As it stands, the only truly safe options for cyclists are to travel a kilometre west to the Clark/St-Urbain underpass bike path, go 500 metres east to the Christophe-Colomb underpass bike path, or take the Rosemont/Van Horne overpass. This rail line has no level crossings east of Wilderton Ave., four kilometres away.

So far, there’s no indication that any level crossings for pedestrians and cyclists are in the near-term plans for CP. 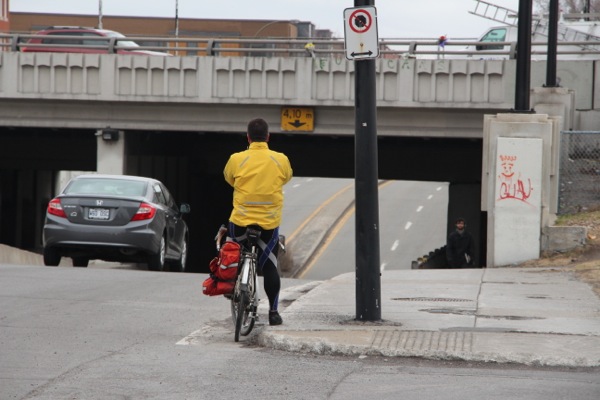 So until we have a better option, cyclists will have to choose between putting themselves in danger of getting rear-ended by an impatient driver or putting pedestrians in danger of more likely but less serious collisions.

The next time I go through that underpass, I’ll take my chances with the cars. At least that way I’m not the one responsible for someone getting hurt.

UPDATE (May 6): The Côte-des-Neiges/Notre-Dame-de-Grâce borough has announced it will also allow cyclists on sidewalks through a handful of underpasses (most under train tracks). That gives all these underpasses that allow this action: