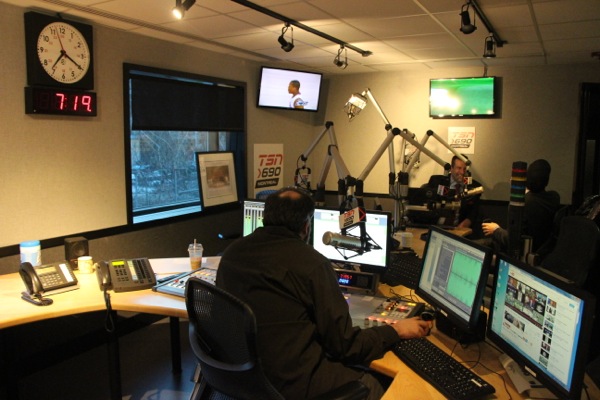 TSN Radio 690’s new studio on René-Lévesque Blvd. You may start seeing it on TV soon as TSN looks for more daytime programming for its additional channels.

Even though it won’t have a lot of NHL hockey games to fill them with, TSN is planning to expand from two to five channels this fall to allow it to broadcast more sports programming.

Along with that move comes a desire for more programming, and in addition to more live sports and different time zones for SportsCentre, they’re going to add “local hockey programming generated by production expansion at TSN Radio stations in Toronto, Ottawa, Montreal, Winnipeg and Edmonton.”

TSN tells me that this will mean installing television cameras at those TSN Radio stations. “We will announce specific programming details later this summer, but we are looking to build on the success of our TSN Radio programming and integrate new content on TSN channels,” said Greg McIsaac of their PR department.

Currently, TSN2 airs televised versions of the Mike Richards morning show and Dave Naylor afternoon show from TSN Radio 1050 in Toronto (at least when it doesn’t have live events that are more important). After the expansion to five channels, we could see similar things done to Montreal’s TSN shows like Mitch Melnick’s afternoon drive show, or the morning show with Shaun Starr, Elliott Price and Rick Moffat. The details won’t be announced until later, so we don’t know if this will be a daily thing, or weekly, or maybe just Habs pregame shows. Lots of possibilities are in the air. But what we do know is that TSN Radio 690 personalities should expect to see their faces on TV more often.

TSN’s need for additional channels became clear during the first round of the NHL playoffs, when it had a Raptors game and two NHL playoff games airing simultaneously. The Raptors were the priority, pushing the Boston-Detroit game to TSN2. The New York Rangers-Philadelphia game, which was originally scheduled to air on TSN2, had no place to go, so TSN cut a quick deal with Rogers to air the game on Sportsnet 360. Once TSN expands to more channels, this won’t be necessary.

Of course, TSN loses NHL playoff games starting next season, but as its president tells the Globe and Mail, there are hundreds of hours of programming in other sports that it can’t air live because it doesn’t have the space. Sports like tennis are particularly hard, because in early rounds you might have one or two feeds showing big stars, then one or two others showing Canadians. Channels quickly fill up.

The big question will be about carriage. Most major distributors have added TSN2, but some still don’t have it. And putting three more channels, all in HD, takes up a lot of bandwidth that is in short supply these days. We can assume that Bell will be quick to add the extra channels, and maybe Shaw as well, but for cable providers like Rogers, Cogeco and Videotron, the decision might be harder to take.

The addition of more channels with more content will also likely coincide with demands from TSN for higher wholesale fees from distributors. According to CRTC data released last week, TSN gets an average of $2.57 a month from its 9.07 million subscribers (this includes TSN and TSN2), which is a very high fee for a specialty channel. In 2009, it was $0.87 per subscriber per month on average. As its deals with distributors come up for renewal, it’s demanding much higher subscription fees. And distributors will pass those costs along, either by raising their rates overall or by pushing TSN into premium packages that will start costing a lot more.

In other words, TSN is getting better, but we’re still the ones who are going to have to pay for it.