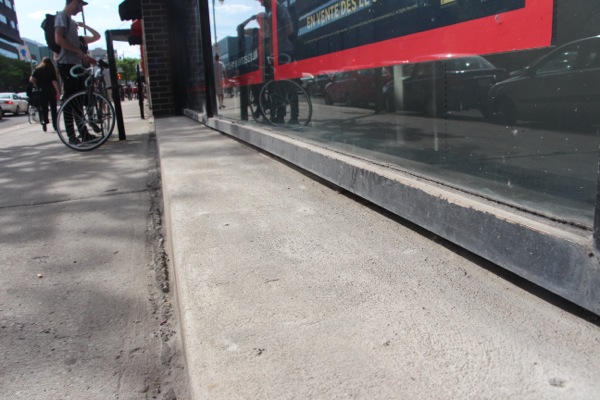 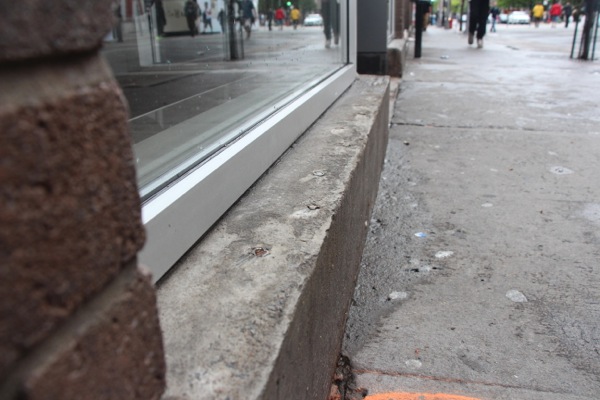 Anti-sitting spikes were also installed — and then removed — at McDonald’s at Ste-Catherine and St-Christophe.

And then everyone went on with their daily lives, going back to ignoring homelessness as an issue. (Though some, like CBC’s The Current, tried to look at the broader problem.)

I don’t want to play all holier-than-thou here, but I wonder why we’re so outraged about this but not about all the other deterrents to homeless people sitting or lying down downtown. And how the people who are so mad about these attempts to deter unwanted people would feel about a homeless person sleeping in front of their homes.

I went around town a bit over a couple of days looking for other examples of this. And while I didn’t find too many spikes outside windows, I found plenty of places that seemed specifically designed to prevent homeless people from lying down on them: 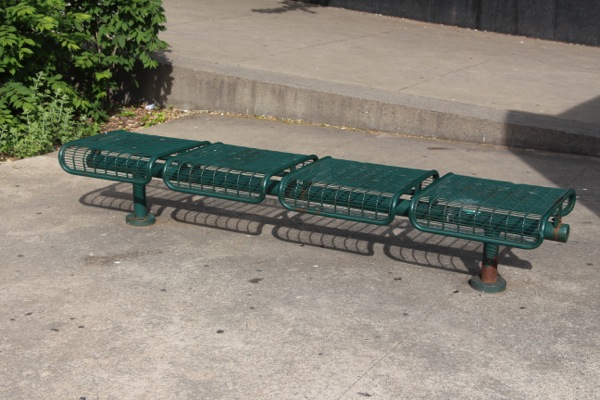 A bench at Émilie Gamelin Park pivots at the centre, designed to throw anyone who tries to lie on it to the ground.

I learned the unique design of this bench at Emilie Gamelin Park the hard way, trying to lie down on it while waiting for the bus one time. It tipped me over and put me on the ground. Thankfully there are no spikes there, but the message was clear: This was specifically engineered to make lying down impossible.

Go around the city and you discover all sorts of bench designs that incorporate obstacles that at first glance seem like armrests but are actually uncomfortable to use that way. Their real function is to deter people from lying down. 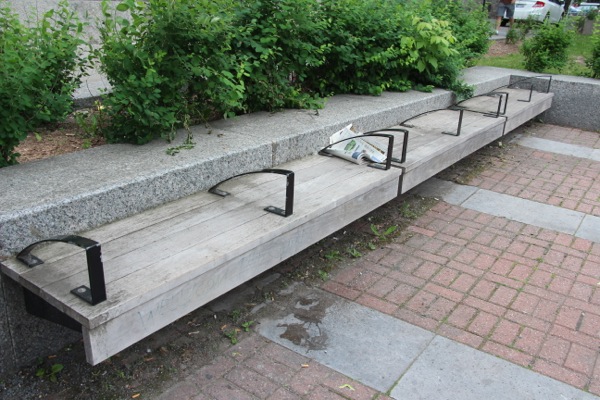 Outside the Camille Laurin building of the Office québécois de la langue française at Sherbrooke St. and St-Urbain St. 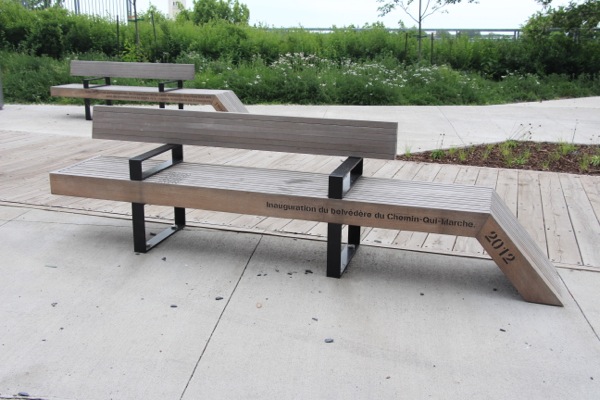 Across the street from a new development at the eastern end of de la Commune St. 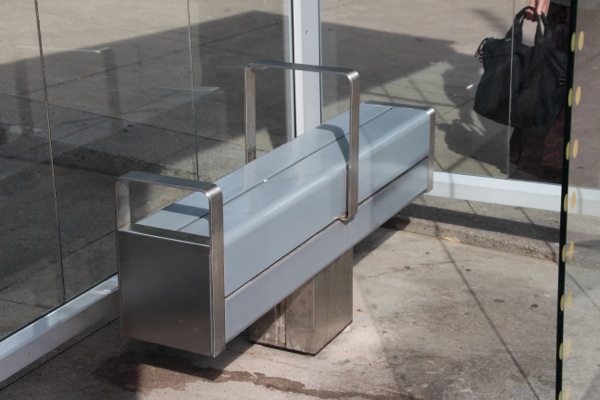 Inside a new bus shelter at Berri St. and de Maisonneuve Blvd. 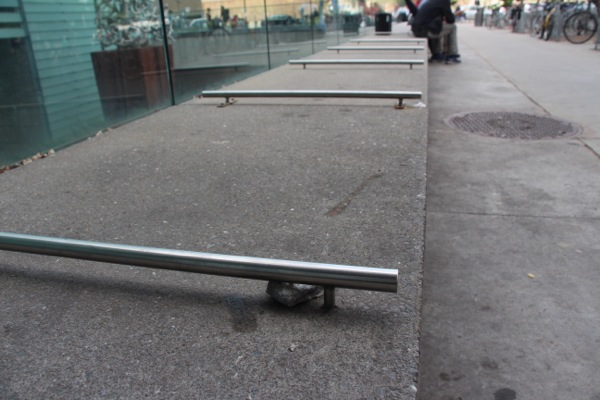 Outside the Grande Bibliothèque at de Maisonneuve Blvd. and Berri St. 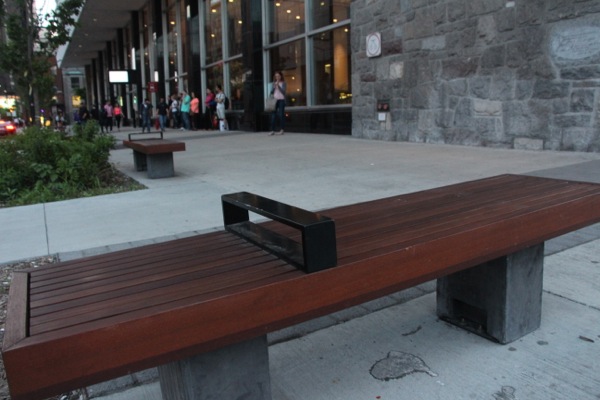 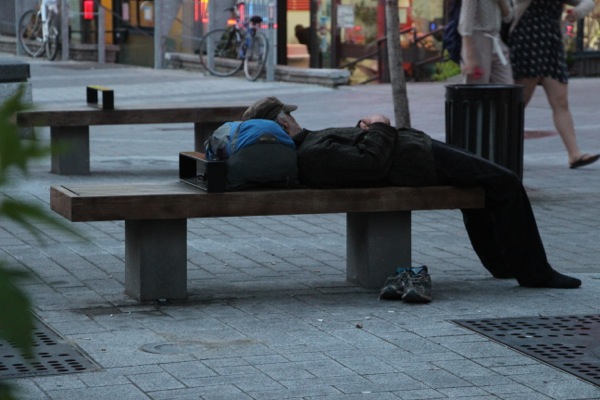 The Concordia bench makes things awkward, but not impossible, for someone wanting to sleep there.

And all this is beside all of the bright lights, obnoxious instrumental music, overpowering smells, fences, private security guards and other means used to keep undesirables away from businesses.

It would be easy to say that the business community is intolerant. But these businesses are run by people. And people who run businesses aren’t more evil than those who don’t. They just have more experience with itinerants who scare away clients — i.e. us.

And besides, the bench examples I give above are mostly from institutions, not businesses. These are government-funded organizations that have done this, because they too are tired of dealing with homeless people sleeping on benches and ledges. But nobody is outraged over these, even though they were, like the spikes, specifically designed to be unwelcoming to homeless people.

But let’s focus our outrage constructively. In today’s Gazette, we learn that a program that actually worked to get homeless people into homes was effectively abandoned, apparently because the government prefers the status quo to a radical new approach. And yet, few people seem outraged at this. It can’t easily be summarized in a tweet with a cellphone picture, or prompt immediate emotion with the pan of a television camera in a two-minute report.

So instead of engaging in a war of words with a political rival on a website comment forum that nobody else will bother reading, you can make a donation to a local homeless shelter, or a food bank, or a program that helps people who need it. And during the next election, you can make poverty a priority, asking more questions about a politicians’ plan to ensure a basic standard of living for everyone than you do about hypothetical religious accommodations, language policies or Quebec independence.

Outrage does lead to changes, as this spike story shows. But micro-outrage leads to micro-solutions, and that doesn’t solve anything.

UPDATE (June 20): More on this issue from The Atlantic

8 thoughts on ““Homeless spikes” are gone — but what about Montreal’s other homeless deterrents?”