Découverte host Charles Tisseyre’s cri-du-coeur last week at the CBC Annual Public Meeting has already gotten more than 100,000 views on YouTube. Straddling the line between passionate and angry, it deplored the situation at the public broadcaster, how much it has seen its programming cut (his own show now has fewer episodes and more repeats as a result) and has been kicking its young talent out the door.

But while Tisseyre’s words got wild applause from the crowd assembled in the basement of the Maison Radio-Canada, and Tisseyre politely but firmly challenged CBC president Hubert Lacroix on the latter’s failure to answer a question about why he hasn’t done more to fight the federal government on CBC funding, the Radio-Canada personality doesn’t necessarily share the crowd’s animosity toward Lacroix. 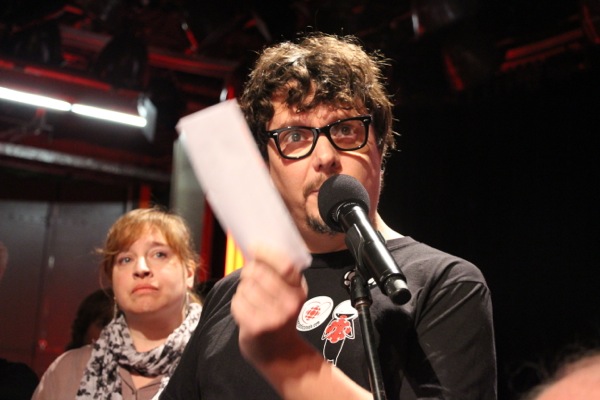 A concerned citizen helps Hubert Lacroix out with the tedious resignation-letter-writing thing.

“Animosity” is perhaps an understatement here. Many in the crowd wore T-shirts that seemed to directly blame Lacroix for the thousands of job cuts the broadcaster has seen since he took office. The second question of the event asked if he should resign. Later, someone handed him what he described as a pre-written resignation letter that needed only Lacroix’s signature.

But Tisseyre told me later in a one-on-one interview that Lacroix’s resignation would serve little purpose. “If the people who were there resigned, they would be replaced by others, who would be faced with the same cuts. I think the problem is much deeper,” he said.

You can read more about Tisseyre’s comments in this (paywalled) piece I wrote for Cartt.ca. It also includes my impressions about Lacroix’s problem with expressing the right emotions to relate to his employees and CBC fans among the general population.

I recorded the Tisseyre interview on a recently-purchased smartphone (RIP Google Nexus One, you served me well), and the quality is pretty good considering I was in a room where everyone was talking. And Tisseyre is a great speaker, so I offer the audio here for your enjoyment (edited slightly to remove my awkward umms and ahhs):

You can also watch the entire public meeting, panel discussion and audience questions on CBC’s website, or read the notes of Lacroix’s speech.

You are the president

For whatever reason, Hubert Lacroix isn’t a beloved figure among the CBC unions and citizens who want more funding for the public broadcaster. But it’s unclear exactly what their problem is with him. He and his team are administrators trying to balance a budget, and it seems on that front that they’re succeeding. They have established priorities, such as preserving local news, that some may disagree with. And like any other large corporation, there are the management fumbles and scandals (see Ghomeshi, Jian). 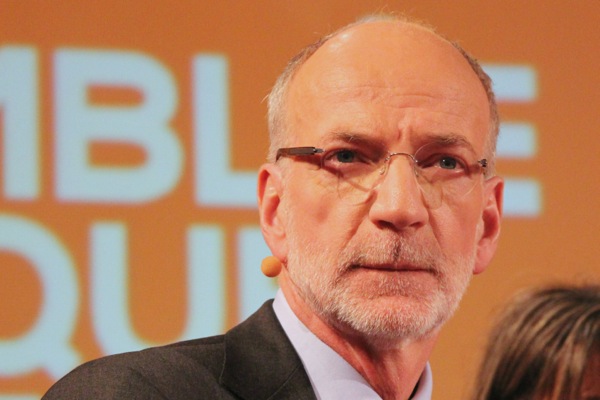 But about the only concrete criticism about him that I’ve seen is that he hasn’t gone on a tirade, ripped his shirt off in front of Parliament (to use the literal translation of the French expression) and done more to convince the Conservative government to give the CBC more money by either going more into deficit, increasing taxes or cutting other programs.

As Lacroix pointed out, the CBC has tried to be creative, asking for new funds for local TV stations from the CRTC, putting advertising on Radio Two, launching the CBC Music service, and other measures meant to increase revenue.

Maybe there’s more that I’m missing, or maybe those scandals are bigger than I think, or maybe it’s that Lacroix has to martyr himself, resign in protest over the CBC’s lack of financing.

So I put this to you, armchair media management consultants: If you were the president of the CBC, what would you do differently? (“Shut it down” is not an option, as much as some people like to think that’s what Lacroix is secretly there to do.)

31 thoughts on “What would you do if you were CBC’s president?”