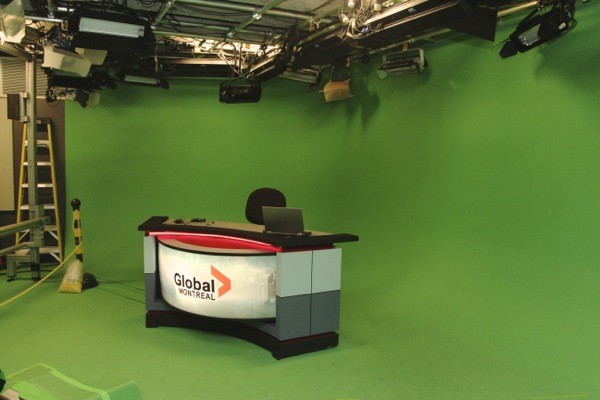 You’d think that Global couldn’t go any further in centralizing the production of their regional newscasts. As it is, stations like Montreal have their control rooms in hubs thousands of kilometres away. All that’s left are the newsroom, the journalists, some ad sales and marketing people, and a small green studio with a desk and an anchor.

But they’ve managed to find a way to take it even further. On Thursday, Shaw Media announced that in eastern and central Canada, late-night and weekend newscasts will be done out of Toronto. Like what they did with control rooms, now even the anchors will produce multiple newscasts for different regional markets in one shift.

It’s part of what Global News boss Troy Reeb describes as a move to “a story-centric production model and that means moving past some of the traditional ways we’ve produced television newscasts.” In other words, the focus is on having local people work on the content, while saving as much money as possible on the container for that content.

This won’t be the first time Global has had people from Toronto do local news. Evening news weather man Anthony Farnell is based in Toronto, a fact that’s never made obvious to viewers.

But it’s odd that Global thinks that local anchors aren’t important. After all, they’re not just pretty faces that sit at their desks until they’re ready to go on air: They’re writing scripts and checking up on local news, work that presumably would need to be taken up by someone else if the anchors are taken out of their jobs.

In Montreal, the jobs affected would be those of late-night anchor Elysia Bryan-Baynes and weekend anchor Peter Anthony Holder. Bryan-Baynes is staying on as a reporter, but Holder, who’s technically a freelancer, is out of a job this fall.

Connell says he plans to return to freelancing. The others either declined to comment or didn’t respond when I asked them to.

“While we can’t comment on specific individuals, many of the impacted studio positions will be converted to field reporting which should help provide more local content not only for the late and weekend shows but for online and mobile,” Reeb told me.

Reeb put the cuts at less than 30 nationwide, which suggests maybe four or five on average per market affected.

No changes are planned for the evening newscast at 6pm, which will still be anchored locally, or for the weekly interview show Focus Montreal.

While the morning shows will still be three hours, still feature local anchors and still be produced locally, segments that are the same in different regions will be produced on a national level.

“Each half hour, an eight-minute segment covering national and international content will be produced centrally and will air in all shows. This is approximately equal to the amount of national content covered currently in each local show. Again, the goal is to eliminate the duplication that occurs when multiple anchor teams in multiple studios discuss the same trending stories, and to focus our local newsrooms on distinct, local content.”

I’m not sure how true it is that eight minutes each half-hour is of non-local content. There’s entertainment and sports news, sure, but in Montreal at least most of the morning show’s time is spent on local headlines and in-studio interviews.

This change is expected to roll out by the end of May.

The strategy of centralizing news production and leaving local news to local journalists is nothing new. CTV makes use of its media empire to put business news from BNN and sports news from TSN on its newscasts. City TV’s local morning shows have sports updates from Sportsnet, personalized for each market.

But Global is taking it a step further with outsourced anchoring, giving us something a bit closer to what they have planned for their Global News 1 project. Submitted to the CRTC in September, the plan is to have news feeds for each market contain a mix of local and national news without requiring their own control rooms.

Global is still waiting for the CRTC to process and publish its application for the unique all-news service.

UPDATE (April 15): The Canadian Union of Public Employees has sent out a press release decrying the loss of local programming on Global Montreal. The statement says that the morning show will also be anchored out of Toronto, which contradicts the information I have above. I checked with Global, and a spokesperson responded by calling CUPE’s statement “inaccurate and misleading.” The way I describe the situation above is correct, Global says.

April 16: CUPE has sent out a correction, claiming it was given incorrect information from management the first time. The two stories are now consistent.

June 7: Dagenais was heard on the air doing the weekend morning newscasts on CJAD.

16 thoughts on “UPDATED: Global to have late local newscasts anchored out of Toronto”