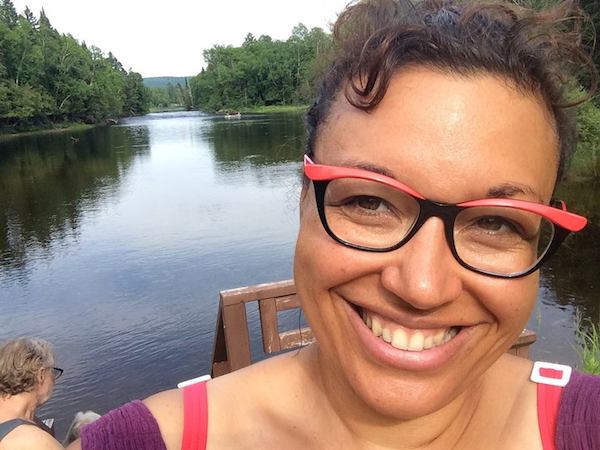 Ange-Aimée Woods on the day before she died, in a photo posted by her mother on the anniversary of her death.

Former CBC Montreal reporter Ange-Aimée Woods, who died one year ago today, didn’t die from heart failure, but because of an anaphylactic reaction to an insect bite the day before, a coroner determined in a report filed recently.

According to the report by Dr. Jean Brochu, Woods, 41, had been swimming on Canada Day 2014 at a summer home in the Laurentians. She was bitten by an insect above the ankle in the late morning, and later complained of dizziness and noticed the area of the bite had become swollen and reddish.

It was the next morning that the situation deteriorated into an emergency. She was found the next morning in her room having difficulty breathing, apparently from a blocked throat. An ambulance arrived at 11:12am, and Woods was soon thereafter in cardiorespiratory arrest, prompting attempts to reanimate her. Intubation (putting a tube through her throat to allow air to get to her lungs) was impossible because her jaw muscles were contracted, and the report notes difficulty bringing her out of the basement, requiring assistance of police officers to get the stretcher out of the building.

She was rushed to Mont-Laurier hospital, arriving at 12:31pm and attempts to resuscitate her continued until 3:19pm, when she was declared dead.

The coroner noted three litres of blood in her abdomen, which likely happened during the reanimation process because it is not explained by any bleeding out or trauma. Septic shock was discounted because she never complained of a fever or shivering, though the dizziness could have been caused by hypotension.

Toxicology tests showed no alcohol in her system and only a small amount of ibuprofen (painkiller Advil or its generic equivalent).

Brochu’s conclusion is that Woods was killed by what’s called biphasic anaphylaxis, in which symptoms of an allergic reaction can happen as much as 72 hours after exposure. Normally the immediate reaction is the more serious one, and it’s recommended people be observed in a hospital after treatment for serious allergic reactions in case of a biphasic reaction. But in Woods’s case, the initial reaction was little more than swelling around the site of an insect bite (the report doesn’t identify which insect), and the secondary reaction proved fatal.

You can read the Ange-Aimée Woods coroner’s report here, in French.

A bursary in Woods’s name, to be given out to undergraduate journalism students, was set up at Concordia University. You can donate to it here.