Though it was in the middle of a busy newsroom close to deadline, I tried my best to watch and listen to the federal leaders’ debate last night. It could be the only time during this election season that we see those four party leaders on a stage together.

If you missed it, it’s on YouTube (I can’t embed it here because Maclean’s doesn’t want me to).

Especially in the context of a simultaneous circus of clowns south of the border, it was nice to see four smart, articulate leaders lay out their policies and policy differences under the bright lights. I saw Stephen Harper defend his record on his own without his party machine behind him. I saw Thomas Mulcair and Justin Trudeau set out their economic policies and criticize the current government on its record, all without losing their temper. And I saw Elizabeth May, my pick as winner of the debate, establish herself as an excellent debater with a solid grasp of economic issues.

Sure, there were some annoying things about the debate itself, like the constant interrupting, the repeating of scripted talking points, and the useless closing messages. And limiting the debate to four topics meant a lot of stuff did not get addressed, which is a big issue if Harper doesn’t want to engage in any more general-issue debates in English.

But in general, I was pretty well informed. Maclean’s, moderator Paul Wells and broadcaster City TV deserve credit for this.

Unfortunately, I also watched the hour-long post-debate analysis show, as well as three useless non-commercial breaks during the debate, and it sent me into a bit of a rage.

Rather than discuss whose economic policies make more sense, or fact-check what the leaders said, or really discuss the issues in any way, we got the same old post-debate “who won” discussion, as if leading a country is more about showing off your dramatic presentation skills than having a better plan.

It’s one thing if you don’t take yourself too seriously (like BuzzFeed), but I expected better from the official broadcaster of the debate (even though Rogers pushed the analysis show to OMNI so it could air another U.S. primetime drama on City). 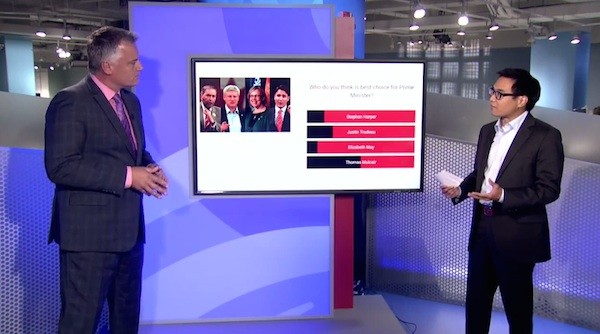 A discussion of a useless Facebook poll after about 20 minutes of debate with Kevin Chan, right.

After the first half-hour, City took a three-minute break to give us an interview with a journalism student in Toronto and a Facebook poll that its analyst admitted wasn’t really based on anything said during the debate because people hadn’t had the chance to listen to the leaders yet. Even though the result of 50% for Mulcair should have been a dead giveaway that the poll is not at all reflective of the Canadian population, they went with it anyway. They also broadcast results showing Canadians almost unanimously in favour of proportional representation and carbon taxes, even though actual scientific polls don’t show anything even remotely similar. And there was the stunning revelation that people in Alberta talk more about oil than the rest of the country.

How this was useful to viewers is beyond me. 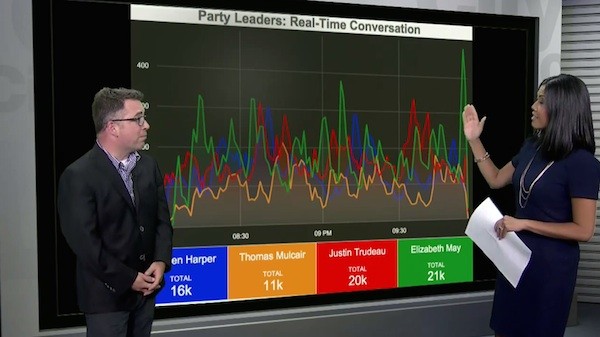 Twitter’s Steve Ladurantaye, left, discusses how much people were talking about the leaders.

Then there was the Twitter discussion, in which they analyzed how much people were talking about the leaders. What they were saying, of course, wasn’t important, and wasn’t discussed.

I guess what we can learn from this is that Donald Trump would make a great Canadian prime minister. Because volume is more important than content. 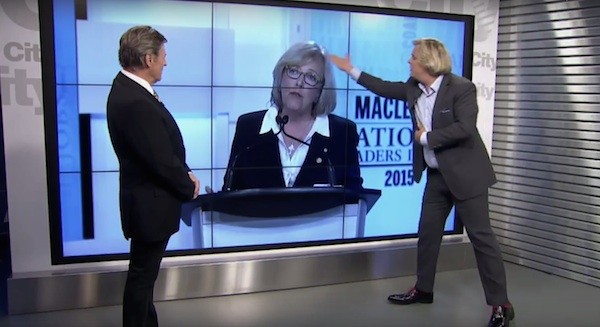 But what infuriated me most was when they brought on a body language expert to literally discuss style over substance. Setting aside the sexist criticisms of Elizabeth May’s attire (there was no mention of how any of the other leaders were dressed), the segment reinforced the fact that during a debate, what you say isn’t as important as how you say it.

Throughout the three-hour broadcast, there were panel discussions about who was winning the debate. Some of that discussion was based on what the leaders said, but much of it was about how they said what they said. Were the leaders confident? Did they make any gaffes?

Don’t get me wrong, the leader of a country should have good public speaking skills. A big part of being a leader is being able to convince people to do things for you, so style matters. But this incessant focus on treating the debate like a boxing match or tennis tournament just hammers in the idea that the issues don’t really matter. That if you want to be a politician, it’s better to hone your skills in theatre school than law school.

We Canadians like to think we’re better than the Americans when it comes to our politicians. We look at Donald Trump and we laugh. But based on what I saw of this debate analysis, I don’t see why, if Trump was in this debate, the media wouldn’t have been unanimous in concluding that he would have “won” it.

5 thoughts on “The federal leaders’ debate was good, but the analysis of it was awful”