So I’m just not going to partake. I could laud Bye-Bye 2015’s spot-on impersonations, impressively transformative makeup and prosthetics and expertly-done song parodies. Or, more likely, I could point out that it’s hit-and-miss on the laughs, occasionally politically insensitive or downright racist, and had a Montreal-centric (and certainly Quebec-centric) view of the year’s issues. I could declare Infoman the better of the New Year’s Eve specials, which is apparently de mode, or I could crap all over the Air Farce (and deservedly so).

But everyone else is doing that, so instead I’ll focus this post on something more enjoyable.

As a fan of Weird Al, you won’t be surprised to learn I’m big on song parodies. And there were a bunch of them on TV on New Year’s Eve. Some of them were lazy and unfunny. But some were very clever, and I feel they deserve more attention.

Here are my picks from the Canadian New Year’s Eve specials this year, in both official languages: 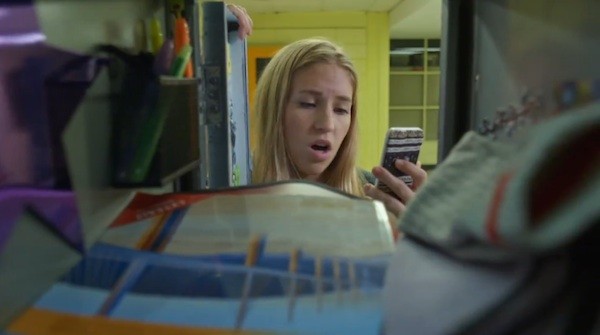 Claudia Bouvette is forced to part with her cellphone

Meilleur avant, the New Year’s Eve special of youth-focused channel VRAK.tv, tends to get forgotten in these roundups, but embedded among its silliness are some good sketches, and this song was one of my favourites of the night, taking Coeur de Pirate’s song about moving on from a relationship and replacing it with lyrics about a young girl being forced to separate from her cellphone during class.

One of the things I like about it is how much I understand it, even if I never lived this experience myself. Students didn’t have cellphones when I was in high school, but now they’re so ubiquitous that they’re banned from classrooms so students aren’t distracted by them. Students in Vrak’s target demographic no doubt identify with the message, and sayings like “mon cell c’est ma vie” don’t sound too far from what you’d really hear from a teenage girl.

Actress Claudia Bouvette gives just enough exaggerated drama to be believable as an entitled teenager without turning it into the kind of offputting overacting that’s common on a kids’ channel. 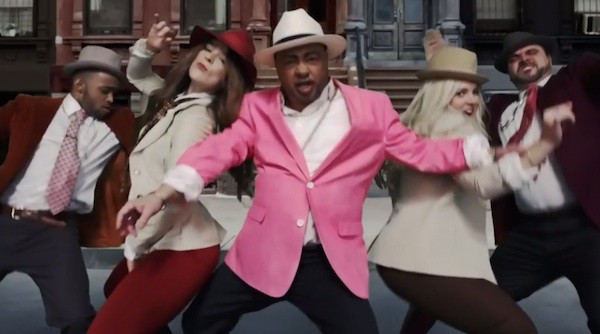 Maybe I’m biased because I like both the song and the François Bugingo scandal, but this song, during which Normand Brathwaite (in barely recognizable prosthetics and makeup) impersonates the disgraced journalist and sings about all the stuff he witnessed (the birth of Jesus, the discovery of fire, the beginning of the Bye-Bye), is well done, and Brathwaite gets in some dance moves and does a good job making his face expressive considering how much of it is fake.

I’d give extra points for bringing in Brathwaite here instead of having one of the other (all-white) cast do this song in blackface, but do they really deserve congratulations for that? (A later sketch in the show had a couple of cast members playing asians, and that didn’t go well with some of the population who noticed.) 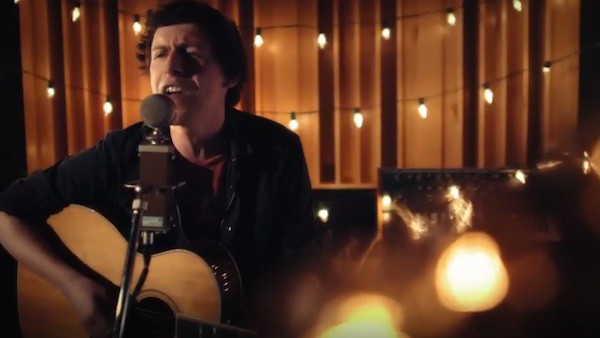 Patrice Michaud singing new lyrics to his own song.

The original song is two years old, so it may be a bit out of place for a 2015 lookback (Jean Leloup’s Paradis City couldn’t be made to work?), but when you can bring in Michaud himself to sing new lyrics to his own song, you have to jump at it.

So we have the singer and his guitar presenting a recap of the year right after the midnight countdown, to images of the Bye-Bye cast having fun taking pictures (an ode to Michaud’s music video) in costume during their sketches.

And it ends on a message of hope for peace in light of what happened in Paris this year. It’s not terribly funny, but that’s not its purpose. It’s a good song to let us have closure on both the year that’s passed and the sketch show we’re currently watching that’s almost over. 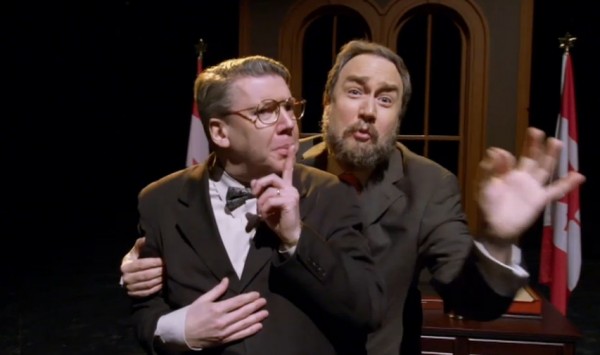 Greg Thomey as a nameless NDP MP, and Mark Critch as Tom Mulcair in a 22 Minutes song parody medley

Watch online, starts at 7:07 (The original song, for reference)

I’m glad for this number because otherwise I would have had to include an awful Air Farce take on Uptown Funk as my token anglo selection here.

This 22 Minutes sketch, in which Mark Critch’s Mulcair tries to convince a nameless MP (hey, it’s Greg Thomey!) not to cross the floor to the Liberals, doesn’t have the best lyrics or production values, but it has Mark Critch, whose exaggerated expressions really sell it.

The sketch continues into parodies of Let It Go and Bohemian Rhapsody, which are not as great.

Please don’t go, don’t leave your old buddy Mulcair
Don’t cross the floor to that cute head of hair
Do you think Justin can lead better than me?
Don’t answer that, I asked rhetorically

(The original song, for reference)

Actually a series of tightly edited clips of statements from politicians during Montreal’s “flushgate”, featuring the unmistakeable beat of Ronson’s hit, I’m a bit disappointed that they didn’t go further and try to give the voices more melody (maybe Auto-Tune them next time?), but hearing “tampon, condom, couche” several times in various orders definitely brings a smile to the faces of those who thought this whole issue was a news story that was full of … well, you know.

(The original song, for reference)

What better way to honour a mayor whose antics can get cartoonishly silly than with a cartoon? Infoman reimagines Coderre as Yogi Bear, smarter than the average mayor, constantly on Twitter, calling journalists when he changes his underwear. It’s short but sweet.

UPDATE: Infoman did a behind-the-scenes video of the making of this cartoon.

Oh wait, that was real.

Not a song parody, but an original song written by Daniel Beaumont and performed by Galaxie, this ode to the year that passed opens up Infoman’s excellent year-in-review show. And the show made it available to download afterward so we can enjoy it for years to come.

P.S. Why aren’t any of these (legally) posted on YouTube? Or Facebook? Or at the very least extracted into separate videos on the broadcaster’s website? (UPDATE: Infoman has put its three clips on YouTube, and a grateful nation thanks them.)