On Monday, CTV News President Wendy Freeman appeared at a CRTC hearing in Gatineau looking into the future of local television, and she was asked about the editorial independence of Bell Media’s newsrooms, particularly in light of the Kevin Crull scandal, and journalistic independence code that followed it. Here’s what she said, from the transcript of that hearing:

It’s actually working out very well and what we have done is we’ve put a journalistic independence policy in place and basically so that there is never any interference from anyone that no one can ever influence our news division.

But the independence policy was distributed across the company and in the end it basically says that no one has the right to interfere in our news gathering and in our news, and in our news editorial decision-making. And it has been going well. Thank you for asking.

Bell Media hasn’t published this independence code, but apparently its journalists can go straight to Freeman with any issues, and she reports directly to BCE CEO George Cope.

Two days later, there’s a test of this independence code as BCE does its annual Let’s Talk campaign to raise money and awareness for mental health. A laudable cause, to be sure, but it’s also an ad campaign with Bell’s logo all over it. (I first wrote about that aspect five years ago, and there was a followup counterpoint a year later.)

This year, as it has previously, Bell Media sent out a press release promising wall-to-wall coverage across its properties, including CTV News Channel, CP24, TSN, RDS, BNN, local CTV News stations and news-talk radio stations, plus newsy shows like eTalk and Innerspace. Everything under the Bell Media umbrella was going to talk about this issue.

So how does that square with the journalistic independence code? How are journalists supposed to feel independent if BCE is having them all report on a Bell campaign?

I put the question to Freeman, and here’s what she wrote back to me:

Thanks for checking in. I can confirm with complete certainty that all decisions to cover Bell Let’s Talk day and it’s mental health initiatives by CTV News outlets are made completely independent of corporate influence. CTV Newsrooms are unequivocally free to choose the news they cover.

Bell Let’s Talk Day is a news story every year that is of significant national interest.  It is being covered by a wide range of news outlets, including the CBC.

Millions of Canadians are engaged, making it Twitter’s #1 trending topic nationally and #2 worldwide. From politicians and the royal family to celebrities and athletes,  Bell Let’s Talk Day is clearly of interest to many, and as a result, newsworthy.

With regard to the press release cited in your note, we often announce in advance our coverage plans for news of national importance and of interest to viewers, always subject to change of course depending on the news of the day.

I’m still a bit skeptical about the influence Bell has over its newsrooms’ coverage. Here in Montreal, CTV News at noon had a five-minute remote interview with Mary Walsh near the top of the newscast (she did the rounds of CTV stations), and later another five-minute interview with a pro wrestler. During both, there was a graphic overlay of how many texts, calls and tweets were contributing to the campaign. That graphic, of course, used Bell’s logo, its colours and its fonts. 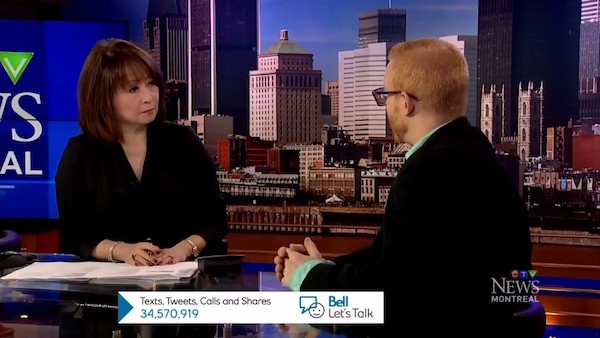 Does anyone believe CTV News would be doing this if this was a Telus campaign? Or a Manulife one? No, it would probably be covering it like CBC and others are covering today’s events: as an average news story about a trending topic, not a news event that requires special attention.

I certainly wouldn’t expect newsrooms to announce their coverage plans days in advance.

But who can be angry about more attention to mental illness, right? It’s a good cause, so why would a news director choose not to report on it, unless out of some malice? Is it so bad to hand over CTV News to Bell’s corporate PR people for a day for some joint venture for charity?

I’m a bit concerned that CTV News and other Bell Media news outlets are being a bit too passive about corporate interference, despite what Freeman says. I certainly wouldn’t expect any of their newsrooms to note the fact that Bell has many employees that don’t enjoy mental health insurance coverage, for example. (Though that’s a larger issue about freelancers and contract workers replacing permanent employees that’s affecting lots of sectors in the economy.)

But I’m more worried about the slippery slope. When CTV News, Bell Media and BCE see themselves as part of the same family, with journalists and corporate PR working so closely together, it’s easier for people to get the impression, like Crull did, that they have the same interests, or even that one is subservient to the other.

Maybe I’m just being paranoid. Maybe all of Bell Media’s newsrooms independently choosing to cover the same issue on the same day is normal and has nothing to do with the fact that the issue is being pushed by Bell Media’s parent company.

Or maybe I’m just being heartless because I’ve never had a mental illness and I should just shut up and let this one slide.

23 thoughts on “Bell Let’s Talk: Are all of Bell Media’s newsrooms independently choosing to cover it?”