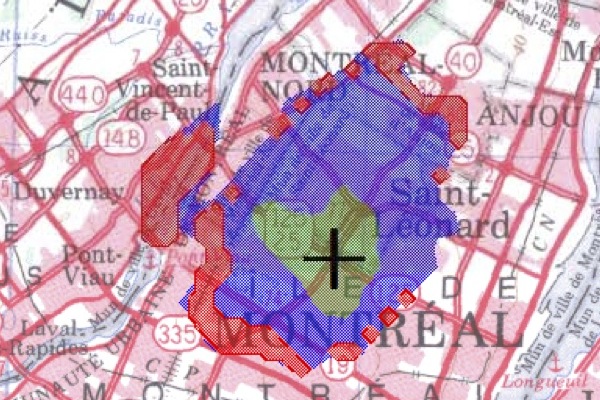 Realistic pattern of the new CHOU retransmitter at 104.5 FM

A year and a half after rejecting a technically identical proposal, the CRTC has approved an FM retransmitter for Radio Moyen Orient (CHOU 1450 AM) in Saint-Michel.

The new transmitter will operate at 104.5 FM with a power of 50 watts, from an antenna on top of the Sami Fruits building on 19e Ave., near Pie-IX and Jarry. The map above shows its limited coverage area, and the red parts show where it can expect interference from other stations.

The biggest source of mutual interference will be CBC Radio One’s transmitter at 104.7 in N.D.G., which will be harder to hear in areas of Ahuntsic and Villeray. But people in those areas will be listening to CBC on 88.5 anyway. 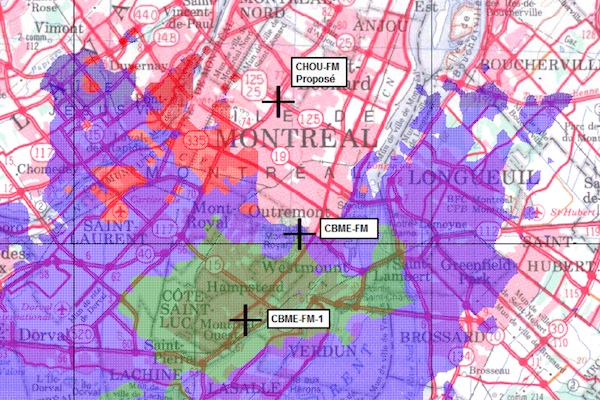 So what changed at the CRTC to change their minds?

That’s a good question, because I can’t really find any differences in the applications. It uses the same technical parameters, the same arguments, the same listener complaint letters and the same field measurements. But for some reason, the commission now believes the station has demonstrated a technical need for the retransmitter, which is at the edge of CHOU AM’s service area.

In the Commission’s view, the new transmitter would allow approximately 14,000 Arabic speakers to receive CHOU’s ethnic programming, mainly in Saint-Léonard. However, coverage may not be adequate in all of the targeted neighbourhoods because the proposed low-power transmitter would experience interference in most of its secondary service area.

So maybe the commissioners just changed their minds on the subject.

The decision means speakers of Arabic and other Middle-Eastern languages will be well represented on the FM band in Montreal. CKIN-FM 106.3, which was purchased by Neeti P. Ray last summer, has changed its schedule to be mostly Arabic.

CHOU has two years to implement the new transmitter, unless it requests an extension. Other FM frequencies can still be used for medium and low-power transmitters. An application is pending for 90.7, and the CRTC has determined that 107.9 isn’t protected.