Today, we learned that even Quebec City’s trash-talk radio has its limit.

Or, well, we learned that again. Because it’s happened several times before, including with the man at the centre of the issue today, the king of the format, Jeff Fillion.

At exactly 1pm on Wednesday, Bell Media and CHIK-FM (Énergie Québec 98.9) announced that Fillion, who hosted the afternoon drive show from 3-6pm weekdays, no longer works for the company. (It’s not explicitly clear if he was fired, quit or some mutual agreement was reached, but it’s clear this was more the company’s doing than his.) The station has put Maxime Tremblay in his timeslot for the time being.

The latest scandal involving Fillion began on Sunday, when entrepreneur Alexandre Taillefer appeared on Tout le monde en parle. In an emotional part of the interview, Taillefer addressed the recent suicide of his son, who he said gave no warning signs, except through Twitch, the Amazon-owned video game live-streaming site that he spent a lot of time on.

Fillion made a comment on Twitter, linking to a Journal de Québec article summarizing the interview, in which he noted the apparent blame placed on Twitch owner Amazon. (Taillefer notes that Amazon.com tracks your purchase and product viewing habits, but Twitch can’t tell or does nothing when someone on its service is talking about suicide.) Fillion also includes a couple of smiley-face glasses-wearing emoji apparently because they look like Taillefer. 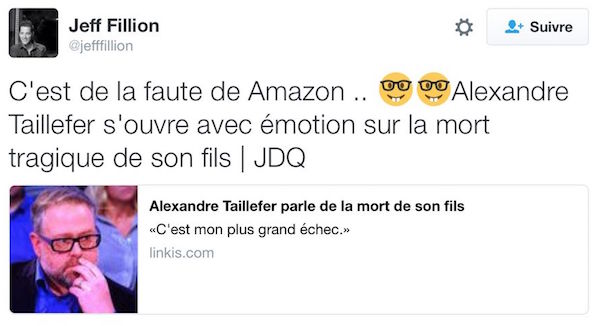 We now have a scandal. One based on a tweet whose message and intention was not very clear, but that comes from a guy who has a reputation for treating people with disrespect.

Fillion (said he) apologized to Taillefer on the air, and said his tweet was misinterpreted, but that didn’t stop the scandal train. He also appeared on Énergie’s sister station in Montreal to explain further, saying that he didn’t see the episode of Tout le monde en parle and was responding only to the article, that he has nothing against Taillefer, and denouncing the “trial” that has been mounted against him.

Fillion explained that his comment was about the Journal de Québec article, accusing it of summarizing Taillefer’s appearance for clickbait, and saying it shouldn’t have uncritically repeated his comment suggesting Amazon shares some blame. He also suggested that it had been rewritten and retitled after the fact. (It was edited, but I haven’t found any earlier version that changes the context in any significant way.)

Apparently it wasn’t good enough. Bell announced on Tuesday that he had been suspended, Fillion shut down his Twitter account, and a day later he was gone.

(Taillefer says he hopes Fillion reinvents himself and drops the negativity. We’ve also learned Fillion sent Taillefer a letter of apology before he was fired.)

All that for this?

Don’t get me wrong, I’m not crying any tears for Jeff Fillion. He’s not some young PR representative who tried to make a joke on Twitter and got fired because it was misinterpreted and went viral. This kind of sarcastic dismissal is entirely on-brand for him. And he could have easily explained himself further in subsequent tweets if 140 characters wasn’t enough, but he didn’t.

But this is hardly the crime of the century here. It’s a tweet in which Fillion summarizes Taillefer’s decision to place some blame on a company, apparently sarcastically, and adds a couple of smiley-face emoji that seem inappropriate for such a serious topic.

If he hadn’t included those emoji, and just said “C’est de la faute de Amazon”, would this be as much of a scandal? Or would it just be taken as a neutral evaluation of what’s in the article in question?

In other words, did Jeff Fillion get fired because of two emoji characters?

It’s important to put this into context.

Filling you in on Fillion

Jean-François (Jeff) Fillion gained his reputation, and helped build a similar reputation for Quebec City radio in general, from his eight years at CHOI-FM (Radio X). He’s a libertarian who despises socialism, political correctness and much of the left in general. He lost several defamation lawsuits (Wikipedia summarizes them) and his on-air comments led to a CRTC decision in 2004 to refuse to renew CHOI’s licence. The decision was upheld on appeal, and led to the station being sold by Genex to current owner RNC Media.

In the meantime, Fillion was fired after losing a $340,000 defamation lawsuit (of which he was to pay 45%) to weather presenter Sophie Chiasson for his sexist comments about her that a judge ruled damaged her reputation.

He decided to start his own online radio station, Radio Pirate, where he wouldn’t be subject to the CRTC’s rules and could speak more freely.

So why, after all this, did Bell Media hire him in the first place?

Because he’s popular. Despite two fierce competitors in RNC’s CHOI-FM and Cogeco’s FM93 (CJMF-FM), Bell decided to shift the Énergie format to include more talk, and brought in Fillion to host the noon-hour show. The next ratings period was conclusive: Fillion brought the ratings for that time period among the important 25-54 age group up an astounding 447%. When the station moved Fillion from noon to the drive-home period, the noon-hour ratings plummeted by more than half and drive-home ratings doubled. This is not a coincidence, Fillion is ratings gold.

The sad truth about public firings

But then, if Bell clearly doesn’t care about Fillion’s shock-jock reputation, why does a couple of smiley-face emoji lead them to change their mind?

Because unfortunately people are fired amid these kinds of scandals not based on the severity of what they did, but because of the severity of the scandal that ensues. It’s not so much that they were shocked by his comments, but they decided this scandal wasn’t worth the hassle. Had Taillefer not been so offended, and had the media not reported on this tweet, we wouldn’t be here.

A lot of stuff fed this. Taillefer is a well-known and mainly well-liked entrepreneur who was in a vulnerable emotional state as he recounted every parent’s worst nightmare happening to him. Fillion had a reputation for being insensitive and mocking people. And as some people noted, Bell looks bad when its big social campaign is to promote mental health and it’s seen to support a guy who apparently made fun of someone whose son committed suicide. Taillefer himself called Bell out, asking why he was still behind a microphone.

Fillion has a large army of supporters. But it’s dwarfed by the silent majority. Anything that wakes up that silent majority takes away the smaller army’s power.

Let’s not kid ourselves here. Bell isn’t suddenly seeing a new light about its programming. Stéphan Dupont is still hosting the morning show on Énergie, and he too has a history of putting his foot in his mouth. But he isn’t facing a big scandal at the moment, so he gets to keep his job.

Bell Media, of course, has the freedom to hire whomever it wants to host its radio shows, and fire whomever it wants whenever it wants, so long as it respects employment contracts. And Fillion should know by now that the things he says, and how they’re interpreted, are important enough that he should think more before he says them.

But a couple of smiley-face emoji seems kind of a weak final straw.

5 thoughts on “Radio host Jeff Fillion fired for insensitive use of sarcasm, emoji”