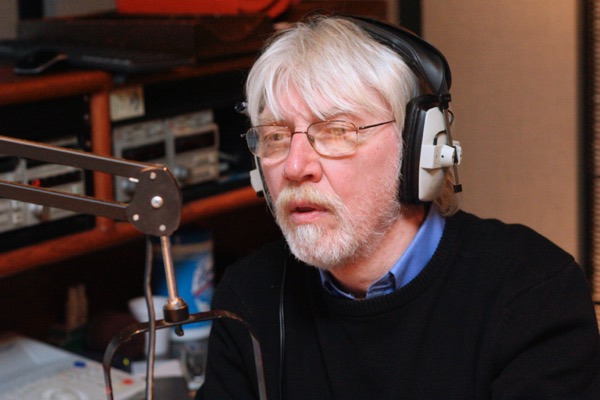 Tootall is a rare animal in the radio business. One of the few living legends still on the air, a leftover from the days when DJs picked their own music, and a modest, unassuming guy who knows his music and is generally liked by everyone.

But what might make him the rarest of radio personalities is this: He’s one of the few on-air people who gets to decide when he leaves. (Well, almost. His bosses convinced him to stay a bit longer.)

And so on Wednesday morning, during what was teased as a “big announcement” on the morning show, CHOM announced Tootall’s retirement.

Tootall, whose real name is Robert Wagenaar, keeps a lot about himself close to the vest. He never says exactly how tall he is, nor exactly how old he is. But he has lots of stories.

How he got hired at CHOM is one of them. Here it is, excerpted from Ian Howarth’s recently released book Rock ‘n’ Radio:

First, he knocked on program director Rob Braide’s door. The doors were always swinging open and closed at any given time at radio stations. Maybe his timing was right. Braide had no on-air job for him, so he moved into the production department where they wrote advertising copy and recorded commercials. There, the manager asked if he could write commercials. In a moment of rare job-hunting honesty, he told the manager he had no experience writing ad copy. Nevertheless, they asked him to write a 30-second spot for Pascal’s, the biggest retail hardware chain store in Montreal. The next day he handed over the copy to the production manager, who looked it over. “Thanks, but we don’t have any openings,” he told Wagenaar. Tuned into CHOM a couple of days later, Wagenaar was surprised to hear his Pascal’s commercial, word for word. The next day, he went back to confront the production manager. “What the fuck?” he said. “You stole my commercial!” Caught in something akin to copyright theft and perhaps intimidated by the agitated six- foot-seven Wagenaar seething over him, the production manager offered him a job.

That production manager, Howarth writes, is the one who gave him the nickname Tootall.

Tootall started out at CJME radio in Regina, and after trying out the west coast he moved to Montreal in 1977. Within months he was working at CHOM, and except for a year he spent doing top 40 radio at CKGM, he’s been there ever since.

Countless Canadian bands owe some of their early successes to Tootall, who started a show called Made In Canada at CKGM and brought it back with him to CHOM. Tootall estimated 2,000 bands were played on the show until it ended in 2008. He also founded CHOM’s l’Esprit music competition.

Tootall is a dying breed of radio announcer, and a reminder that those days of radio aren’t coming back. So it’s sad to see he’ll be riding off into the sunset.

But it’s good he’ll be getting a proper sendoff, and a retirement that is richly deserved.

CHOM posted a job for a full-time announcer three weeks ago. The deadline to apply is July 28.

End of an era! After 40 years, @CHOM977 Too Tall retires in October pic.twitter.com/25t2jvgNvk

Too Tall, perhaps. But never Too Much. Few understand history of pop music better. Electric lunch hour was his home. He'll be much missed.

Congrats to a great man and a great career! Too Tall, you'll be missed.#Legend https://t.co/Ayur82iX3Y

Too Tall IS CHOM. I hope he writes a book. The man has stories to tell. I wish him all the happiness in the world. He's earned it. https://t.co/f5VDVF5qLW

UPDATE: Matt Cundill has a podcast interview with Tootall you should listen to if you’re interested in his story:

10 thoughts on “Tootall retiring from CHOM”