I was busy last Sunday night, helping the Montreal Gazette put together its coverage of the Montreal municipal election. But my PVR recorded the broadcasts of three English-language television stations in the city to see how they covered the evening. Below, I offer some thoughts on how well they did, based primarily on the actual information they provided.

I don’t know about you, but when I’m watching an election results show, I’m looking for election results. Analysts are great for filling time, but the more data you can show me, the more races you can announce, the better.

So below, you’ll see me focus less on the in-studio analysts, who were all fine, and more on what someone would have actually learned watching the broadcast. 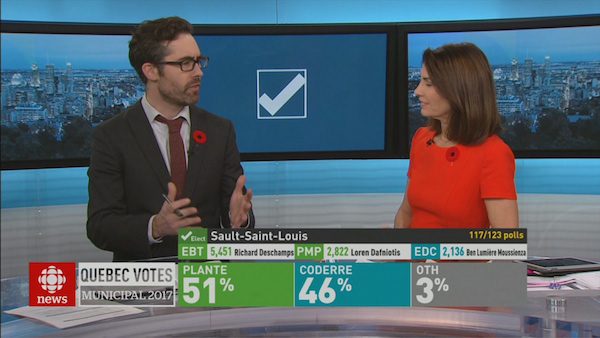 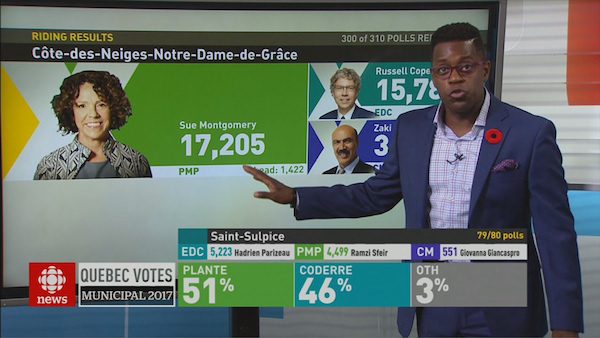 The public broadcaster clearly won in the graphics department, and was the only English-language network with a lower-third ticker with live results. The ticker showed only results from the city of Montreal, but it did not only the city mayor but also borough mayors and all borough councillor races. It took about nine minutes for the top of the ticker to do the rounds of all 64 elected city council seats, so viewers got to see each race about three times.

While CBC was the only station to include Montreal city council results, it failed to include anything off the island of Montreal — no mention of Quebec City, Saguenay, or even Longueuil or Laval. 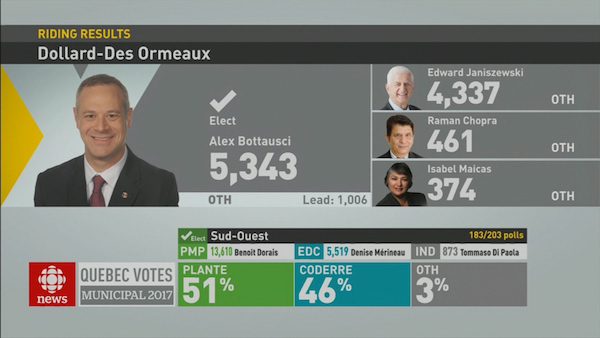 CBC was also the only one to include a live speech in their broadcast, carrying 10 uninterrupted (and untranslated) minutes of Valérie Plante’s acceptance speech to lead off the half-hour show (which had no commercial interruption).

The broadcast actually started on Facebook, where it went for an hour and 45 minutes, but still didn’t start early enough to get the Plante victory call on live. It did mention the Laval, Longueuil, Quebec City and Sherbrooke races, which didn’t get into the TV broadcast, and had live hits from Kate McKenna in Pointe-Claire and Marika Wheeler in Quebec City. And it carried Denis Coderre’s speech in full. My review here is based mainly on the television broadcast, but I’m adding this for the record.

For an election night broadcast with so many races to deal with, there was a lot of time devoted to analysis. And as much as I like listening to the soothing voice of Jonathan Montpetit, I didn’t learn much from him and Arbec repeating stuff that happened during the campaign, promises that were made and stuff that the candidates said in their speeches. Fortunately, they still managed to get a bunch of results into the broadcast, both on Facebook and TV. 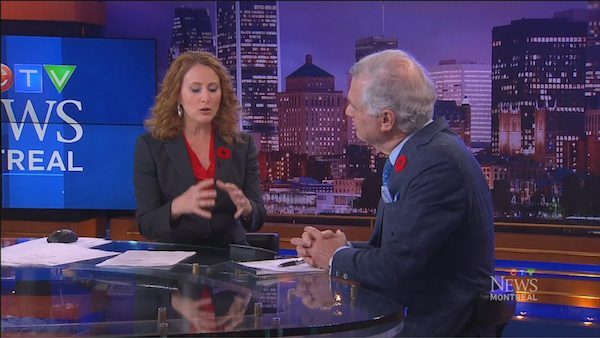 CTV Montreal is the market leader. It has the most journalists, the largest audience, the most history. So it should be expected that they would slay election night coverage.

Which makes it all the more disappointing how little actual data was provided to viewers. Not only was there no ticker, but the individual race graphics didn’t even provide vote totals or party names. Instead, they just had names and photos and a checkmark next to the winner. 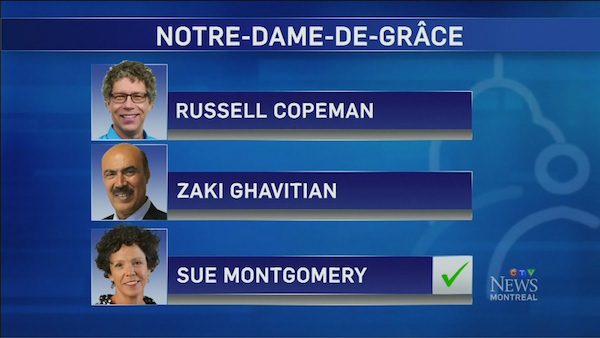 Only for the Montreal mayor’s race was any vote total given in an on-screen graphic. For the rest, well you’ll just have to guess.

This is the reason people tune in to election night broadcasts, and CTV’s viewers were left horribly underserved when it came to actual data.

It was the shortest of the three broadcasts, since it had four commercial breaks, and the last to start at 11:30pm. And CTV didn’t even think it was worth bringing in one of the two main anchors on a weekend shift, leaving the duties to regular weekend anchor Tarah Schwartz.

It had the fewest live reporters, which is surprising, and just about everything about this seemed like it was phoned in.

Still, CTV’s prestige meant it got the first live interview with the mayor-elect, right at the beginning at 11:30. And its reporters were more experienced and seemed to provide more useful information.

But overall, it should be embarrassing for CTV how poorly it did compared to its competitors. 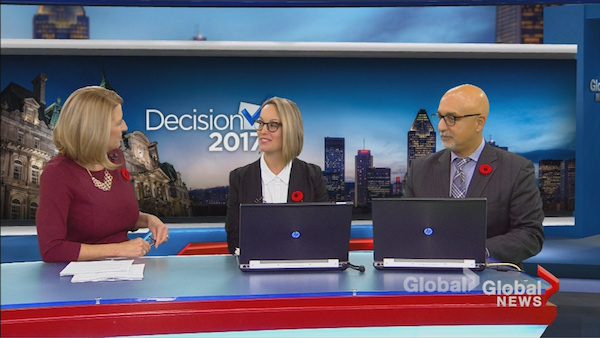 There are always two ways to judge Global Montreal when compared to its competitors: judge the quality alone, as a viewer probably would, or judge how well Global did with its limited resources.

By either measure, the station did well on this night. It extended its TV broadcast to a full hour, had informative graphics, and updated results through the night, though like its competitors it focused a lot on the island of Montreal and areas immediately adjacent. 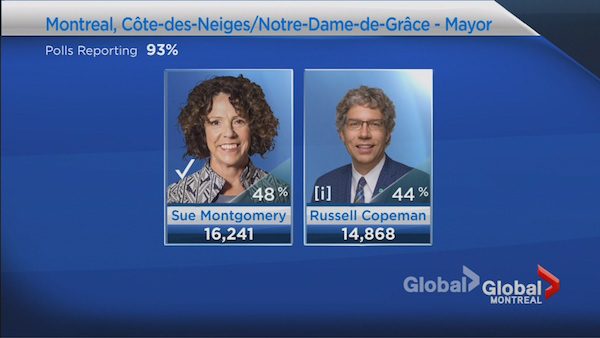 The graphics weren’t as flashy as CBC, and there was no ticker, but you got vote totals, percentages, and an indication of who the incumbent was and the amount of polls reporting. Just missing the party affiliations.

Global also conducted an interview with Plante (just after CTV’s), and made good use of analysts and reporters.

They get extra points for being the longest broadcast, having a special “Decision 2017” opening theme, and putting in the extra effort. But it would have been nice for the only station that still has transmitters in Quebec City and Sherbrooke to actually mention the mayor’s races in those cities. I know it’s not Global Quebec anymore, but I’m sure viewers there would have appreciated it. 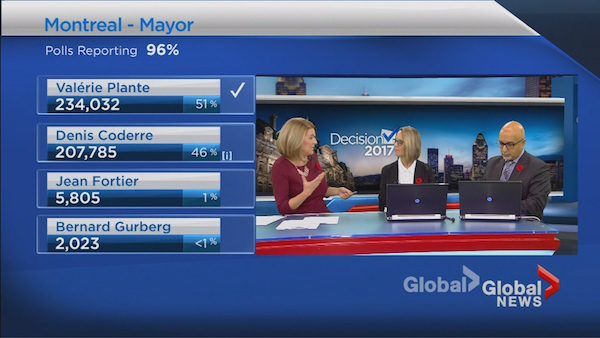