A new report just released by a consulting firm may have an innovative new solution to the political deadlock over a proposed third link between Quebec City and Lévis.

Published earlier this week on an obscure part of the Quebec government website, the report calls for the establishment of a “mobile water surface travel conveyance” (“moyen de transport mobile à la surface de l’eau”) that could connect a fixed point in the national capital (a spot in Basse-Ville has been suggested) with a point near downtown Lévis.

Here’s how it would work: Passengers, cyclists and vehicles would go to the edge of the water and the conveyance would be floating on the water but attached to some sort of docking station. A retractable ramp would allow easy boarding. Once full, the ramp retracts, the conveyance is undocked and floats on the surface of the water, with a powerful underwater motor pushing it to the other side. Once it gets there, it docks, the ramp deploys and the vehicles, cyclists and pedestrians disembark to continue their trips.

One of the brilliant aspects of the plan is that multiple conveyances could be constructed and operating in parallel. As one does its work on one side of the river, the other could be on the other side. There’s plenty of space in the river for two or more conveyances to pass each other safely.

“It’s an interesting idea. But we’ll need more study to determine if it’s feasible,” said André P. Rellefoule, an analyst with Transport Quebec. “Such a conveyance would need to be weather resistant, for example.”

Opposition parties in Quebec City jumped on the report and criticized the government of not looking into this alternative solution before jumping on their $10-billion tunnel idea.

“It’s scandalous,” said one Liberal MNA who won’t be running for re-election this fall. 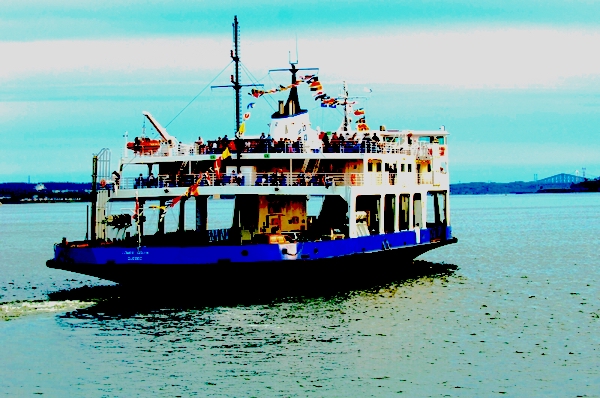 A preliminary analysis suggests the system would cost only about $6 billion to set up.