It’s hard to take the Canadian Screen Awards seriously when there are 134 categories, including ones like Best Sound in a Variety or Animated Program or Series, Best Sports Opening/Tease, and Best Biography or Arts Documentary Program or Series. The Oscars, by comparison, have 24 categories. And though the Emmys are a similar mess of too many awards (especially if you include local Emmys), I don’t think that’s necessarily something to look up to.

Anyway, because just about everyone was nominated in the list announced today — the 2016 Canadian Screen Awards got three nominations — there were some accolades for English-language TV series produced in and around Montreal.

I may have missed other Quebec-based anglo series nominated for awards (if you spot one, let me know), and there are plenty of Quebec films nominated in the film category (including Xavier Dolan’s Juste la fin du monde).

There were no local nominees in the many categories for news (though shout out to former CBC Montreal anchor Andrew Chang, nominated for best local anchor at CBC Vancouver). 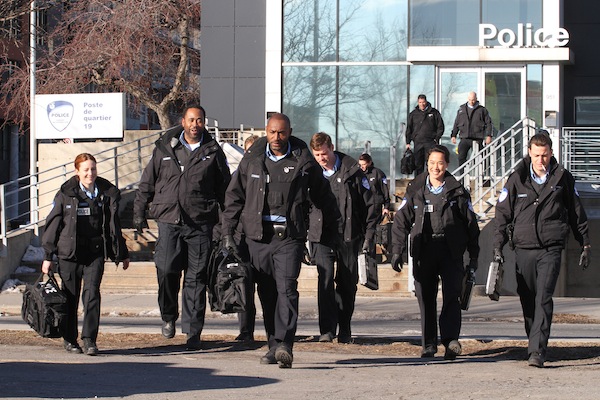 So it looks like 19-2 is as much of a success adapted in English as it had in the original French. Bell Media announced on Tuesday that the Montreal-set cop series will be renewed for a second 10-episode season.

The French series, created by and starring Réal Bossé and Claude Legault, debuted in 2011 on Radio-Canada to critical and ratings success. It was praised in particular for the realistic portrayal of police officers. Bossé and Legault spent time with Montreal police to learn what life is really like on the job.

Fans of the French series have had to show patience, though. Because of various delays, the series has only aired 20 episodes (two 10-episode seasons) in three years. A fourth season is only slated to air in January 2015.

Bell’s press release doesn’t give an idea of when Season 2 of 19-2 would air.

The English 19-2 was originally ordered as a pilot for CBC, but was picked up by Bravo when CBC passed on it, a decision the public broadcaster is hopefully regretting. It’s basically a shot-by-shot remake, with nearly identical plot, the same characters (except for Bossé’s Nick Berrof, who becomes Nick Barron, played by Adrian Holmes), same music and same cinematographic style. The actors are different (with the exception of Benz Antoine, who plays the alcoholic cop Tyler), and Podz, the director whose mark is so clearly felt in the French version, is not behind the camera in the English one. Still, the English version is as compelling as the French one, and worth watching even for those of us who already know what’s going to happen next.

19-2 is the first English drama in forever that is clearly set in Montreal. This leads to some odd things we just have to accept, such as the fact that even though Montreal is a French city and French signs are everywhere, nobody ever actually speaks the language or even has a strong accent. There are also the occasional geographical head-scratchers.

I love that #19two is set in Montreal, but this episode keeps mentioning Cabot Square, and this is not Cabot Square pic.twitter.com/VuBvoDb8DZ

But it’s fun to see our fair city on the small screen in English without the producers trying to tone down its character so it can pass for any American city.

Bell has qualified 19-2’s first season run on Bravo as a big success, reaching an average of 190,000 viewers a week, making it the No. 3 show on the network. The series got a boost the first week with a day-after airing on CTV, and I wouldn’t be surprised if we see the season rerun on the main network similar to what it did for Space’s Orphan Black.

Assuming Season 2 of the English series goes the same way the French one does, it’ll be a roller-coaster plot-wise, starting the first episode with a school shooting (in the French version, the school shooting scene was done as a 13-minute continuous take, and Podz is going to direct it again in English) and ending with a big reveal where … well, I won’t spoil it for you.

Bell also notes that the English series, produced by Sphère Média Plus and Echo Media, will be going to Cannes to be shopped to international broadcasters around as part of the MIPTV conference there next week.

The first nine episodes of 19-2 are available for viewing at Bravo.ca. The first season finale airs Wednesday, April 2, at 9pm on Bravo.