You might recall back in 2012 there was a big scandal because of a dispute between Lassonde, the Quebec-based maker of Oasis fruit juice, and Olivia’s Oasis, a small company that makes skin care products.

It wasn’t the cease-and-desist letter that made headlines, or even the court case itself, which resulted in a judge not only dismissing Lassonde’s lawsuit but ordering it to pay costs. Instead, it was a court of appeal judgment that reversed the lower court’s ruling on costs that sparked social media attention when it was written about in La Presse.

Olivia’s Oasis was a small operation, and lawyer’s fees fighting the case would have put it out of business were it not for social media attention (including a Guy A. Lepage tweet) that prompted so much bad publicity for Lassonde that it quickly reached a settlement — on Easter weekend — with Deborah Kudzman, surrendering to a woman they had just beat in court.

Now, Ottawa producers Heidi Lasi and Pat McGowan have published a 14-minute documentary on the subject, which is posted on YouTube, called The Oasis Affair. It’s financed by Bell Media’s BravoFactual production fund.

The documentary is professionally produced and interesting, but it suffers from Lassonde’s refusal to participate, beyond sending an impersonal letter. I get that the company would rather forget about this story, but it would have been great to hear from people in the company at the time about how they reacted to the media onslaught and what they learned through the process. It might even have made the appear more human. 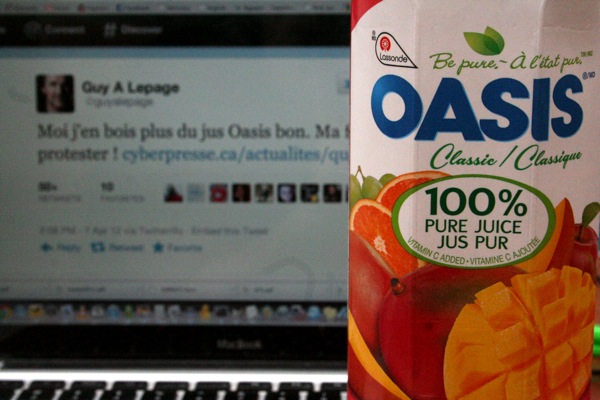 So here’s the deal: A Lassonde, the company that makes Oasis fruit drinks, is apparently sensitive to other companies using the name for consumer products, even when there’s no risk of confusion with a bottle of juice.

Saturday’s La Presse carried the story of its legal battle with a woman, Deborah Kudzman, who makes olive oil soaps called Olivia’s Oasis. Lassonde sued Kudzman, arguing that her product’s brand was confusingly similar to their Oasis juice brand, even though one’s a juice and one’s a soap, and they have nothing in common other than a word.

Kudzman not only won the case (since, among other things, “oasis” is a word in the dictionary and there are about a billion commercial products with that word in their name), but the judge ordered Lassonde to pay Kudzman’s legal bills, which had surpassed $70,000, she told La Presse.

But Lassonde appealed that part of the judgment, arguing that its lawsuit wasn’t abusive. It won that case, and was relieved of the obligation to pay Kudzman’s legal bills. Kudzman, convinced that Oasis knew from the start that it wouldn’t win its case and sued just to try to scare her away, went to La Presse. The story centred mostly on Kudzman, including only a brief comment from Lassonde saying its lawsuit was justified.

That might have been the end of it, a story in the newspaper about a big company screwing a small business, but then social media took over. Bloggers started writing about it, influential personalities like Guy A. Lepage were talking boycott, and Oasis’s Facebook page was flooded with negative comments. La Presse had a followup about the online reaction.

Then, a change of heart. In the evening, as Montrealers were focused on a meaningless hockey game, the company announced on its Facebook page that it would compensate Kudzman for her legal costs. (The post has disappeared, though I don’t know if that’s because they deleted it or for some other technical reason. Their official Twitter feed linked to the post and La Presse quoted from it.)

It’s surprising. First, that everyone would pay so much attention to this story. Second, that it would provoke a response on a Saturday evening during a long weekend. Third, that in a matter of hours a company would decide to make a PR decision that would cost them almost $100,000. And finally, that they would just give her the money after having gone through the trouble of an appeal process in order to not give her the money.

The cost of doing PR

The basics of this story happen pretty often. When the media publish a story about a big company screwing someone (usually a customer), the response tends to be to compensate that person with a refund or anything else that would make them satisfied. Whether the company was right or wrong immediately becomes irrelevant. This isn’t a customer retention issue, it’s purely a public relations one.

But these kinds of stories are usually about customers with $100 phone bills or who bought something at a store that didn’t work. Fixing those problems cost far less than the free advertising they get from being seen as a good corporate citizen on the local news. (It works best when some slick fact-play tries to turn it into some sort of misunderstanding, as was the case in Oasis-gate.)

Rarely do we see such a huge monetary settlement offered so quickly.

I can imagine some self-appointed social media marketing experts salivating at the thought of offering their two cents on the matter (oh wait, here they are). It tends to happen after high-profile cases like this. They talk about the mistakes the company made and pretend they would do things insanely better if only they were in charge. (In what I’ve read so far, the only concrete thing someone has suggested they should have done differently is to take minutes instead of hours on a holiday weekend to decide to spend almost $100,000 on their opponent’s legal fees because people complained on their Facebook page.)

What went wrong here isn’t that Lassonde had bad PR working for it. Its problems were in a conference room, either in the form of its lawyers or its executives (or both).

The real test of whether Lassonde has learned its lesson is whether it will go after other companies that dare use Oasis in their product brand names. Its conciliatory statement implies that it won’t (well, actually it implies that it never did, in one of those amazing doublespeak moments).

Even if Lassonde does change its legal strategy, there are plenty of other companies out there whose greed or fear has eroded their common sense.

UPDATE (April 11): Some people in the communications industry have pointed out that the major error on Lassonde’s part is that it didn’t consult with PR people before engaging in a legal battle that could have put them in hot water. It’s an interesting point. They could have seen this coming and prepared for it, either by not launching the lawsuit in the first place or by having a communications strategy that would mitigate any damage.

Whether that would have made a difference is hard to see. Any lawsuit can make you look bad when you’re a big (or even medium-sized) company going after a mom-and-pop shop. And it’s almost impossible to predict what kind of story will get traction in social media.

Meanwhile, Patrick Lagacé has a story in La Presse about another company, making a cleaning product called Bioasis, that was forced to shut down because it couldn’t handle the cost of renaming itself or fighting Lassonde in court. Lagacé uses this case, which dates from 2003, to call Lassonde a bully.

Lassonde responds in a new blog that things changed in 2004 when it brought its legal department in-house. Its president also says that the Olivia’s Oasis case was the only one that went to court over trademark issues, and that its settlement options include a free license to use the trademark, which allows Lassonde to protect its rights (trademarks lose their value legally if their owners don’t fight for them) without punishing a smaller company.