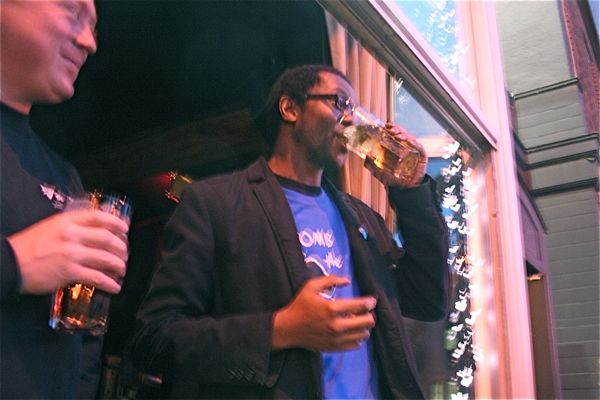 Alston Adams at a Yulblog meeting in 2008

Alston Adams was a character.

I didn’t know him very well, but he was a hard guy to forget, and not only because he’d usually be the only black guy at a meeting of Montreal bloggers.

Adams had been fighting cancer for years, and blogging about it. Even though it was a serious medical condition with a depressing prognosis and no cure, he still kept going, showing up at the monthly YULblog meetings with his razor-sharp wit in tow. It could catch you off-guard, but it was endearing. With the energy and arrogance he showed, you’d think cancer wouldn’t stand a chance.

It took a long time, but cancer won the battle. Adams died yesterday, according to his friends, who have been flooding his Facebook wall. He was 35.

Since they knew him better than I did, I’ll point to the eulogies from his fellow bloggers:

A while ago, Adams participated in a documentary called Wrong Way to Hope, about young adults with cancer. The trailer (released almost a year ago) doesn’t do justice to his personality, which was far more animated (this bit from the deleted scenes is much more representative).

There’s some ironic timing here: His death comes just as the film is coming out. The premiere was two weeks ago, and the Canadian premiere is next week.

The monthly YULblog meeting is Wednesday, Oct. 6, 8pm at La Quincaillerie, 980 Rachel East. Expect Adams to be on the tips of tongues of those present.

UPDATE: Here’s daily mugshots of Adams until Sept. 13, three weeks before he died.