Newspaper advertisements – both in print and online – often suffer from failure of context, where the ad seems inconsiderate next to specific kinds of news stories (usually bad ones).

In newspapers, it tends to happen because advertisers don’t know what copy will appear next to their ads, and copy editors often (for good reason) don’t know what ads will appear next to their copy. The most obvious example is an ad for an airline next to a story about a plane crash (which is why airlines regularly pull their ads after plane crashes, and editors are told not to put plane crash stories next to airline ads). 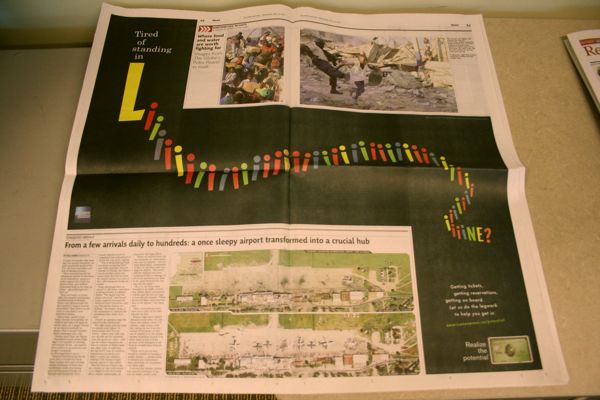 In today’s Globe and Mail, American Express has one of those special-order ads, the ones with a weird shape that dominate pages without filling them, purposefully leaving holes for editorial copy so that readers’ eyes will stay on the page. 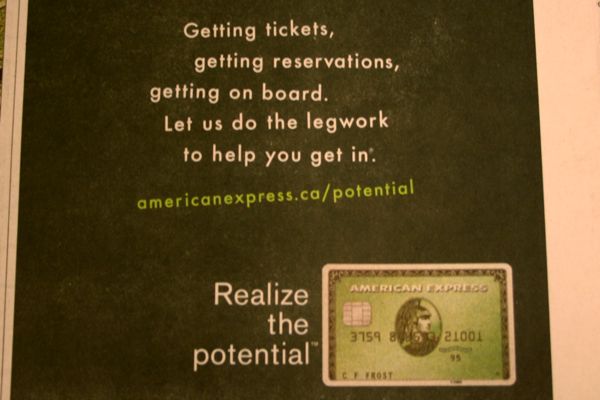 You can probably figure out where this is going by now.

Two editorial holes appear on the page, and both contain news about Haiti. On the top, two standalone pictures from photographer Peter Powell of people struggling for survival. The headline reads: “Where food and water are worth fighting for”. On the bottom, an article from Paul Koring about the overtaxed Port-au-Prince airport.

It’s not just an ad fail, it’s a huge, spectacular double fail filling a two-page spread in the middle of the A section of Canada’s national newspaper. Making fun of standing in line is cute anywhere in a newspaper except next to a picture of starving Haitians beating each other up for the necessities of life. And having an ad about vacation travel works everywhere except next to a piece on how the airport is congested at the most awful place on the planet right now.

It’s not like it was a massive coincidence that this stuff ended up on this page. Haiti coverage is all over this paper, and has been for the past week.

So, then, I have to ask: Did no one at American Express Canada (wow that’s a silly name) think for a moment that the holes they left for editorial content might be filled by news from a disaster that’s already a week old, and that such coverage might not play well with their campaign? Did no one in the Globe’s advertising department put two and two together?

This is the risk you run when you book these kinds of ads, especially in the A section. Advertiser beware.

See also: Timothy Hunt, who points to a similar problem with a similar ad in another edition.