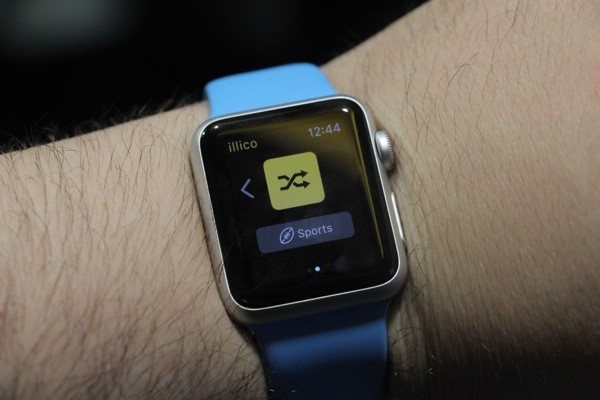 On Monday, I was among a half-dozen journalists invited to a demonstration of Videotron’s new Apple Watch application for the Illico digital TV system.

This app is, as far as anyone working for Videotron knows, the first of its kind. (Except for a similar one launched simultaneously by its main competitor.) It allows users with next-generation Illico TV terminals to control them using the watch. At least a little bit.

Jean-Pierre Gauvin, principal director of development and planning for Illico, said they wanted to start simple, and not try to replicate the features of the remote control onto a tiny watch app.

So instead, the app has two screens and two basic functions. The one the team seemed the most excited about was shuffle. By pressing a yellow button, the TV is commanded to pick a channel at random, from among those you subscribe to or from a preset list (sports, family, film, music, news, anglo, franco and HD only). It’s a function that doesn’t exist on other platforms, though the team is open to the idea of incorporating it if there’s client demand.

Mind you, when I asked about client demand for a shuffle function in the first place, they admitted there didn’t seem to be any. 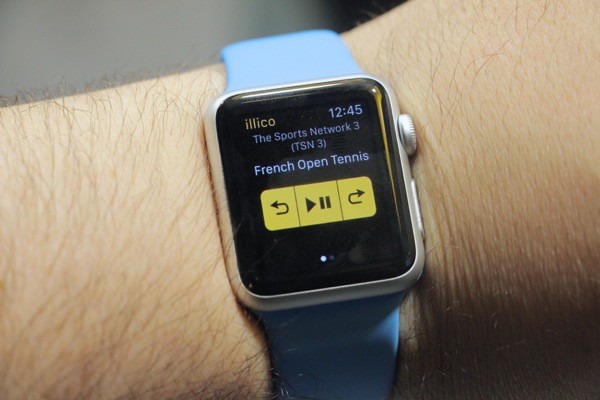 The first screen of the app seems to me the one that will get the more use. It features play/pause button, and skip ahead/back buttons, similar to those that exist on remotes now.

I could see this actually getting use. For example, if you’re going to the kitchen and want to get something to eat, you can tap your watch to pause the TV.

But there’s a lot of stuff that’s missing from this app. There’s no way to tune to a specific channel directly. No record button. No channel up or down or volume adjustment function. No voice interaction. Nor can you actually watch video on the watch (not that too many people would want to do that). Even its main feature, the shuffle, can’t be set to a user-defined playlist.

Gauvin said they wanted to start with basic stuff, get the app out there, and then add new functions later. That’s fair.

“What’s important is hearing the feedback of our users,” he said. “We’re definitely going to add functionality.”

Videotron estimates it has maybe 1,000 or 1,500 users who have Apple Watches, so “it’s really for early adopters.” Those early adopters will expect a lot more functionality, and fast.

And they might get annoyed by the fact that what little functionality is there is buggy. The demonstration got off to a rough start when it seemed the watch lost its connection to the phone and didn’t work. Tapping the shuffle button often didn’t work, requiring another tap before it would change the channel. And despite their claims of instantaneous reaction, most of the time it took about a second for the tap to result in a change on the screen. The fact that the signal travels from the watch to the phone via Bluetooth, then from the phone to Videotron via WiFi/cable, then to the box through the Videotron network, explains the delay, but probably won’t satisfy users much.

I’ve yet to be convinced that the Apple Watch is anything but an expensive gimmick, but if you have one and you’re a Videotron subscriber with a compatible terminal, there’s no reason not to add this app.

The Illico Apple Watch app is available by updating the Illico app for iPhone in the Apple store.

Asked why this was developed for the Apple Watch and not other Android-based smart watches (such as the Samsung Gear), Gauvin explained that the closed Apple environment made development and testing easier. They’re looking at creating a similar app for Android.