A little over a year after it “reimagined” itself with redesigns on four platforms, the Montreal Gazette — my employer — made some minor changes last week, particularly in print.

The daily “Context” section, which included national and world news stories as well as the editorial and opinion pages, has been eliminated, replaced by “NP in the Montreal Gazette”, a section of content from the National Post. 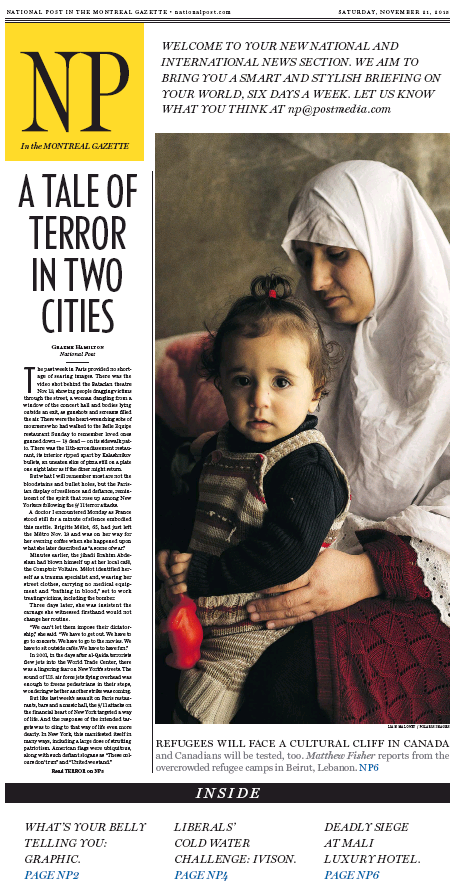 The NP section, which will be six to 12 pages long, is National Post content presented using the National Post stylesheet. It includes national and world news, opinions and columnists like Andrew Coyne, Michael Den Tandt and Christie Blatchford. Similar sections exist in the Edmonton Journal and Windsor Star, and should follow for other papers.

Doing national and international news this way saves resources because the layouts are identical and can be copy-pasted between the local papers. And it makes it look like you get a free National Post in your Gazette.

The change comes with some challenges though. The A section, which is now just local news plus one page of local editorial, letters and opinion, gets more of the ad stacks that leave oddly-shaped holes for news copy. (Insert joke about ads disappearing from newspapers here.) And since national and international news is in another section, it might be a challenge finding local news copy to fill those spaces, especially around the holidays when there are a lot more ads.

The Saturday paper is changing a bit. In addition to Context being gone, the Saturday Extra section is being retired, and its contents scattered into other sections:

Saturday Extra has been in the Gazette since Feb. 25, 2006. And I admit to a bit of mourning for the demise of Montreal Diary, a section with short stories about the city. My first freelance story for the Gazette was a Diary story, and many other freelance writers got their start there. But after a decade, these things get old and I can’t honestly say it would necessarily be a bad idea to move on to other things.

Another change: Letters to the editor are no longer being posted online.

People who have comments or complaints are being asked to send them to feedback@montrealgazette.com.

Meanwhile, the Gazette has also added a city columnist, which it has been missing for a while. Basem Boshra, who has had many hats but was most recently the city editor, is now writing almost daily with his take on the news of the day. His first column, re-introducing himself, is here.

The Gazette has also launched its Christmas Fund campaign, including the daily anonymous profiles about needy families written by slightly less needy freelancers.

Oh, and since a bunch of people keep asking: 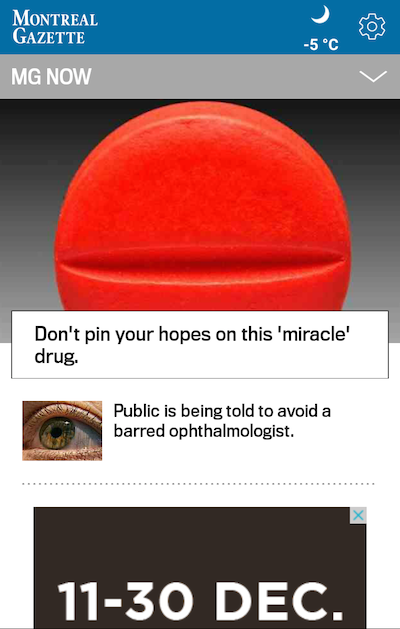 Confusingly, the app actually updates the 1.0 version in the App Store and Google Play. People who have the 2.0 app installed are being asked to delete that in favour of the other one.

Among the features of the new app, which is being referred to unofficially as “version 2.5”: 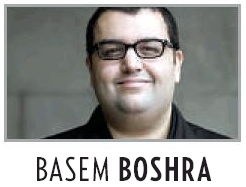 Some of you ancients might remember Basem Boshra as a former Gazette TV columnist. After five years at the paper from 1998 to 2003 (the last year writing a TV column), he left for Toronto, wrote for Dose, then the National Post, and then returned to the Gazette in 2007 as a copy editor. He since moved on to city assignment editor and is now back on the entertainment side.

Today, Boshra launches a new weekly column about popular culture, which will appear Tuesdays. His first column is on the Jay Leno/Conan O’Brien fiasco. He may not have exclusive inside information or unique analysis on the situation, but by golly, he’s got wit.

In other Gazette columnist news, Norman Webster is leaving his weekly opinion column after 20 years, though the former Gazette editor-in-chief says he will contribute from time to time, so long as his Parkinson’s Disease allows him to. And seniors columnist Hugh Anderson returns from a leave of absence to deal with treatment for a rare form of cancer. He kicks off a new column called The Next Chapter, which expands its focus to include baby boomers.

Basem Boshra, The Gazette’s new Arts & Life online manager, is very busy these days. He was hired as a copy editor in March after a four-year absence. Now he’s launching blogs like there’s no tomorrow (and posting almost 100 posts to them already) like Inside the Box (TV), Words and Music (music) and Year One (university freshman diary).

The latest is The Constant Shopper with fashion editor Eva Friede. (The fashion section, for the unfamiliar, is those couple of ad-filled pages on Tuesdays that feature photos of must-have garments and accessories on white backgrounds.)

The blog’s inaugural post (actually more like three posts) chronicles, among other things, her search for the perfect watch. She rejects a $5,300 diamond-studded timepiece because it’s “too big”.

This is where Eva and I differ. My watch was bought for $10 at a street sale, complete with fabric/velcro strap. And it has a stopwatch. And I couldn’t be happier (well, except for the fact that I have to press a button to check the date).

(Don’t get the wrong impression, she also shops at Winners. But don’t expect MTL Street here).