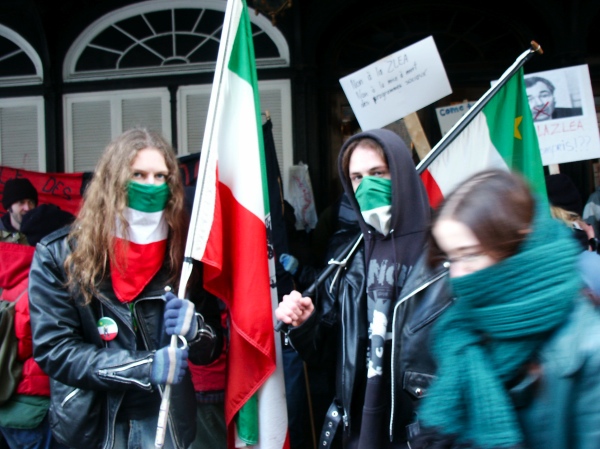 Two guys at an anti-FTAA protest in 2003: Should they be arrested for covering their mouths?

In one of those stories that sound like they should be on The Onion, Montreal Mayor Gérald Tremblay is asking City Council to approve a rule that would make it illegal for protesters to wear masks.

Don’t get me wrong. The vast majority of protesters who wear ski masks to protect their faces do so because they know they will do something illegal and they don’t want to be identified.

But that doesn’t make this any less of a gross attack on freedom of expression.

The press release makes mention of an exception for “valid reasons”, which I would imagine includes “it’s freezing outside” and “I’m a Muslim woman” but not “I’m shy” or “I just don’t want people taking pictures of me”.

But the validity of those reasons would be up to police officers to judge (and maybe, if you have enough money, a court to overturn later). It gives them more power to harass or detain people who haven’t done anything wrong.

If I were more confident in our legal system, I would just laugh this off as something that would immediately get overturned by a court. But I’m not that confident anymore.

Arrest people who do things that are illegal, and charge them for doing those illegal things. Don’t start systematically removing people’s rights because statistics show it will help keep the peace better.

UPDATE (Jan. 28): No surprise, there was a protest to protest against the protest law.

The Gazette today began its five-day series Identities about reasonable accomodation, and their timing couldn’t have been better. The Bouchard-Taylor commission is beginning its public consultation tour of the province (Montreal is the last stop on their trip at the end of November), and a pair of conflicting rulings have been issued concerning the rights of Muslim women to wear veils in upcoming provincial and federal by-elections.