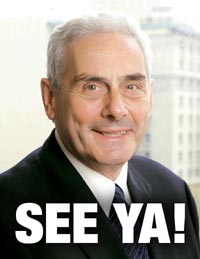 Concordia President Claude Lajeunesse has resigned, just two years and change after taking office. The reason? Everyone hated him.

You can tell it’s bad when the PR people aren’t even trying to hide it. It was a “mutual agreement” between Lajeunesse and the Board of Governors, according to spokesperson Chris Mota, who I’m sure has had a really bad day today trying to explain to the media why the university’s internal political struggles are literally ripping its senior administration to shreds.

(He had a similar problem at his previous stint at Ryerson, and those who remember him there are applauding this embarrassing misstep in his career.)

While a search committee hurriedly tries to find a replacement, the Board will have to find an interim replacement, likely from within the university’s senior administration.

Unfortunately for them, not many of those people are qualified for the job, if only because few of them have PhDs. Instead, all but one of Concordia’s VPs are professionals in their fields, and have specific skills training instead of rounded academic degrees. (One, the fundraising VP Kathy Assayag, doesn’t even have a bachelor’s degree. Ms. Assayag does, in fact, have a degree from McGill University. My apologies.)

The Provost/VP Academic position, which is the most logical choice for an interim replacement, is vacant after Lajeunesse eliminated his political enemies reluctantly accepted the forced resignation of Martin Singer last year.

That leaves the four faculty deans, the dean of “general studies” and the VP of research and graduate studies comprising the field of candidates. And that’s already reaching. You could also go down to the vice-provost and vice-deans, but that that point you might as well start appointing janitors to senior administration positions.

Speaking of which, do you want to run Concordia University? Send in your CV, they might just be desperate enough to take you.

Meanwhile, even the crazy leftists who think all senior administrators are out to secretly murder them are looking back longingly at the days of former president Fred Lowy, who diplomatically kept the university together instead of stubbornly shutting people out (at least until the Netanyahu riot put so much pressure on him he started making poor decisions)

UPDATE: The Gazette has a longer story on the sudden departure, with a quote from an anonymous “insider” pointing out the obvious: That personality conflicts and a clash of professional styles between the Board of Governors and Lajeunesse led to the latter’s departure. It also points out the troubles he’s had with labour unions, the unfortunate timing with the provost position being vacant as well, and the relative quiet on the student front (which is more a matter of a shift in student politics than anything on the administration side).

Meanwhile, Lajeunesse himself issues the most BS-laden press release I’ve seen in … minutes. (Does all this niceness about his departure mean he’s still going to attend his meet-and-greet barbecue this Friday?)

On the same day, he announces that Dr. Louise Dandurand, the graduate studies and research VP I mentioned above who’s one of the few people with a PhD on the senior administration, has been appointed interim Provost. That puts her in the most logical position to take over the presidency, though it would look odd being promoted to an interim position based on holding another position you were promoted to a month earlier.

UPDATE (Sept. 21): The Gazette demands to know why he stepped down. It suggests the problem might have to do with an existential debate over whether the university should be more Ivy-leagueish or more accessible, a debate that was settled years before Lajeunesse came here when Concordia dropped its “real education for the real world” slogan and decided it would be a serious, research-based university that was still accessible.

UPDATE (Sept. 25): The Link reports that one of the governors is quietly resigning for undisclosed reasons (though the timing suggests a possible link to the Lajeunesse resignation).

UPDATE (Sept. 27): Concordia’s full-time faculty association (which normally doesn’t take issue with anything the university does) is peeved at the lack of an explanation.

Apparently Concordia has backtracked from its plan to begin charging students for access to its wireless network. The decision apparently came right from the top, which is a much-needed PR boost for president Claude Lajeunesse (though why he had to wait for student outrage to decide that wireless access is an “essential service” is beyond me).

So students will save a few bucks each year, which they will no doubt be giving to their student union so they can continue needlessly suing other student unions over petty student politics.

The labour situation at Concordia just got a lot stickier, with a vote by its support staff union 95% in favour of authorizing a strike. They’ve been without a contract since 2002 and want pay increases.

If the strike occurs, it’ll be the first major test of president Claude Lajeunesse, who has so far presided over a university that has been uncharacteristically out of the headlines.