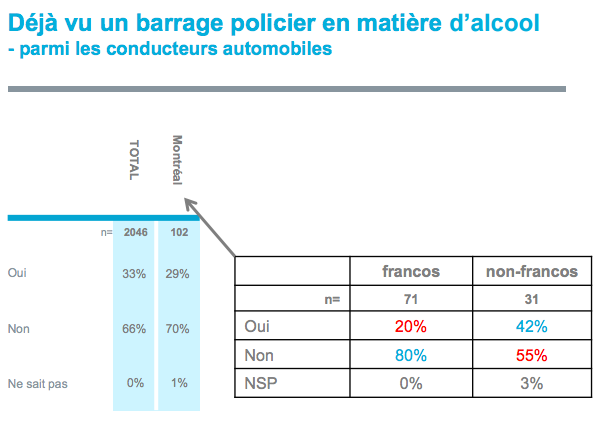 Breakdown of results of CROP poll show sample size of 31 for non-francophone Montrealers.

This morning, Éduc’alcool, an organization devoted to moderation in alcohol consumption, released the results of a poll it commissioned from polling firm CROP related to how people in Quebec drink.

The results were offered to the media under embargo yesterday, and stories appear today in the Journal de Montréal, La Presse, Métro, Rouge FM, Radio-Canada, CJAD and elsewhere that focus on interesting results outlined in the organization’s press release: that there’s a significant difference in how francophones and non-francophones in Montreal drink. Francophones drink more and more often than the rest of the city.

You won’t find a story about this in the Montreal Gazette, despite how relevant this kind of information is to its readership. It’s not because there wasn’t a journalist to cover it — a story was written about it and was set to be given good play in today’s paper. But I had it killed last night.

Well, actually the city editor is the one who made the call, but I’m the reason why, and it sounds cooler to say “I had it killed” than “I noticed something and brought it up to an authority figure”.

The reason is simple: All that data about how non-francophones in Montreal drink is based on sample sizes of 30-40 people, which is laughably small for any survey. None of the conclusions on the difference between language groups could be taken seriously, and without that data there’s really no story here.