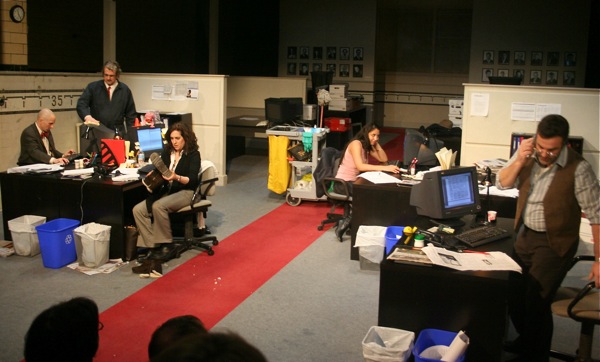 Over the weekend, I joined a group of journalists (in fact, two distinct groups – one veteran and one up-and-coming) to see a production of the Infinitheatre play The Daily Miracle, written by former Gazette copy editor David Sherman.

I’ll spare you the usual theatre review stuff, because (a) I’m not a theatre critic and (b) it’s already been talked about in The Gazette (along with a feature article), La Presse, Mirror, Hour, the Suburban, the West Island Chronicle, the McGill Tribune, the Concordian, the Link, Le Quatrième and maybe some other places too.

We’d first heard about this play years ago, when Sherman left his copy editing job at The Gazette. By the time he made his leave permanent to become a playwright (and work on his first play Have a Heart for Centaur), there were rumours floating that he would use the copy desk as the basis for a production – and the editors potentially as models for his characters.

I should add here that I know Sherman – he was a copy editor when I was an intern at The Gazette, and he was one of the people who I got the most on-the-job training from.

Though I got a sneak preview at a reading a while back, the people I went with on Saturday didn’t quite know what to expect from this play. Though the name of the newspaper is the Montreal Star (taken from the former newspaper of the same name – they even used the same logo on computer screens and papers on set) and its parent company is called WestPress, it’s pretty clear which major newspaper the play is based on. Even some of the characters are familiar, either as composites (Gazé-Deslandes’s Carrie, the pretty young desk intern) or as near-ripoffs (Jean-Guy Bouchard’s Roland reminded most of my former colleagues of a particular person with a similar personality and accent).

But what’s most familiar is the work. The play, staged at the Bain St-Michel (literally inside a pool that had been converted into a theatre) is set in real time, between the 10:30pm first edition deadline and the midnight final. It’s a time when copy editors and other night staff get chatty (the stress of making first edition deadline having just been lifted) and start airing their grievances with the paper and the news industry, along with spreading personal gossip.

It’s hard to evaluate the play objectively because I’m so familiar with what it’s based on. It’s the life I lived for three and a half years at The Gazette. I know the terminology, I know the stress, and I know the characters and their roles.

Still, for the benefit of those who don’t work on a copy desk, I can tell you that what happens in this play is a dramatization. I for one never saw anyone come to work five hours late, pop pills like they were candy and start sexually assaulting his coworkers. But maybe it’s just because I wasn’t there in the old days.

One of the people who saw the play the same night as me was Thomas de Lorimier, who works as a copy editor at La Presse. He agreed that there was a lot more drama here than you’d see on a normal night (but then, that what we’d want in an entertaining play, right?) but that the elements of the characters’ personalities and the way things work are what you’ll find on the copy desk of a major newspaper. A line about how disasters in China need a triple-digit death count before becoming news is entirely true. Having a picture of a pop diva on the cover solely because she’s famous and she performed at the Bell Centre that night is also spot on, as are the staff’s reactions to the burying of (what they considered to be) real news in order to emphasize fluff.

One thing de Lorimier and I both agreed on that was missing from the play was pun-offs. That’s when an editor takes a story and makes a really bad pun (like saying Haiti’s “all shook up”) and other editors jump in with even worse ones. It’s part defence mechanism against the horrors of life they’re exposed to on a daily basis, and partly a way to hone their skills as wordsmiths.

It’s a skill Sherman clearly doesn’t need too much help with, judging by this play.

If you’re interested in getting a dramatic look at a newspaper’s news desk on deadline, The Daily Miracle is a good way to spend an evening. It’s on every night until Sunday, Feb. 14. Details at Infinitheatre.com