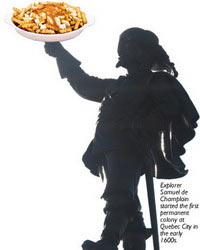 The Canadian embassy in Washington is apologizing to Impératif français, among others, after it used a photoshopped picture of Samuel de Champlain holding a poutine on invites (now scrubbed of the poutine offensiveness) to Canada Day celebrations. IF reacted to the image with their usual measured response.

Perhaps I missed something in Political Correctness 101, but what’s so offensive about this again? Is it some stereotype that we eat poutine? Is it because the image of Champlain was sullied in some way?

Frankly, I think the fact that Canadian Press had to explain what poutine was is offensive to me.