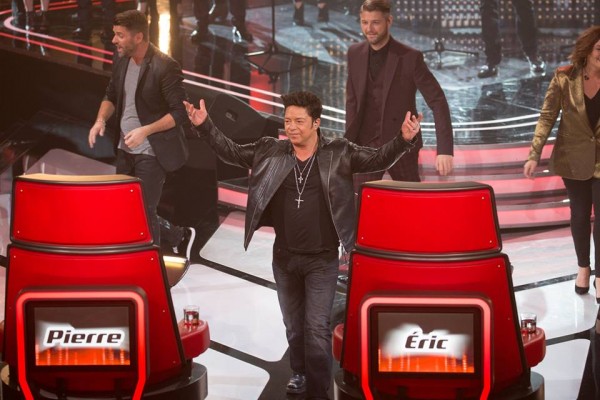 If you’re at all in tune with French-language TV in Quebec this time of year (and if you aren’t, you really should be), it’s hard to miss the phenomenon that is La Voix, Quebec’s version of the Dutch singing competition show whose distinguishing feature is blind auditions.

(If you don’t care about that show, don’t bother reading the rest of this post. It won’t interest you.)

The show has an audience that hovers around 2.5 million each week, and will probably reach 3 million during Sunday’s finale. To put that in perspective, there are about 6 million people in the province that have French as their first language. And a bit under 1 million of them are watching La Voix’s direct competitor, Tout le monde en parle, on Radio-Canada. That’s half of francophone Quebec watching one of two shows on Sunday nights.

After ignoring it at first (I don’t tend to watch reality competition shows), I kinda got hooked on it a bit last year and have been following it intently this year (even watching the behind-the-scenes shows on Monday and Thursday nights). That means I’ve had my heart crushed when a contestant I liked got eliminated, and I’ve taken sides in the heated debates among fans about who is the better singer, or scandals where the public complains that popular voting has too little say in who wins or that popular voting has too much say in who wins. (But seriously HOW THE HELL DOES THIS NOT WIN? COME ON! #TeamGeneviève)

Anyway, back to those blind auditions. The way they work is the contestant goes on stage and sings for two minutes, and coaches that want the contestant on their team press a button that causes their chair to turn around. If more than one coach turns around, the contestant gets to choose their coach from among those who did so. The process continues until all four coaches have 12 singers on their team.

It didn’t take me long to notice patterns, both in how the coaches acted and how the contestants did. Éric Lapointe, in particular, would often be the first to turn around, especially if the singer was a rocker. And, it seemed, in battles between him and another coach over a contestant, he would more often lose. After I noticed someone else make a joke on TV that suggested the same, I decided to put that theory to the test, analyzing the choices made by coaches and contestants during blind auditions for Seasons 2, 3 and 4 of La Voix. (Lapointe wasn’t a coach in Season 1.)

Here’s what I found.