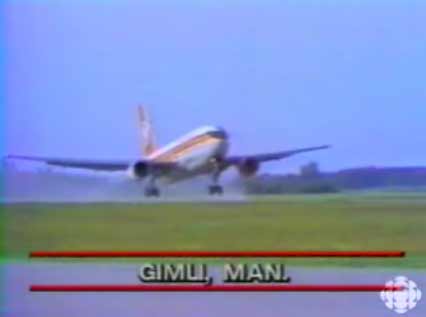 It was 25 years ago this week that Air Canada Flight 143, en route from Montreal to Edmonton (via Ottawa), ran out of fuel above western Ontario and had to make an emergency no-engine landing on what used to be a runway at a small airport in Gimli, Manitoba.

The Winnipeg Free Press has a story about the captain of that flight, Bob Pearson, meeting the two boys he almost ran down with his barely-controllable airplane on July 23, 1983. The boys were part of a family day outing at an old runway that had been converted into a racetrack. Unfortunately, the captain and his copilot didn’t know that and were shocked to find people gathered on their emergency landing strip. With no engines and no room to change course, they had no choice but to land anyway. The kids, being kids, panicked and pedalled as fast as they could on their bikes away from the plane, not rationally concluding that there’s no way a bicycle is going to outrun a landing 767. As luck would have it, the plane’s nose gear collapsed (without power it hadn’t been lowered properly and wasn’t locked in place), slowing it down and keeping it from running anyone over. 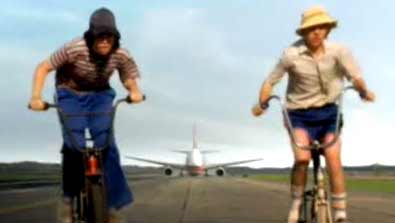 The CBC also mentions a mural that honours the flight being unveiled.

There really isn’t a way to overstate how awesome this story is. This writeup last year at Damn Interesting gives it a shot, though:

After repeated unsuccessful attempts to restart the stalled engines, Pearson and Quintal once again consulted the 767 emergency manual, this time for advice on an unpowered landing. Much to their dismay, no such section existed, presumably because a simultaneous engine failure had been too ridiculous for Boeing engineers to contemplate.

Basically, the story was that the plane’s fuel gauges were non-functional prior to takeoff (apparently a common occurrence at the time which should have been sufficient to ground the plane until it was fixed), and the ground crew measured the fuel load manually (in Montreal and again in Ottawa), figuring that would be enough. Unfortunately, they made an error in the conversion process (the brand new 767 was an all-metric aircraft in an era when people were still using pounds) and ended up thinking they had twice as much fuel as they did.

By the time the crew realized they had insufficient fuel, it was too late and the engines quickly starved to death. This required some quick thinking from the crew, who hadn’t been trained on gliding a jumbo jet without engines because nobody had ever thought it necessary to train pilots how to do so. One never-before-contemplated-much-less-even-tried maneuvre from the captain, a forward slip (where the ailerons were turned in one direction and the rudder in the other, causing the plane to fly sideways and at a nearly 90-degree angle to the ground to lose altitude quickly) is enough to turn one’s stomach. 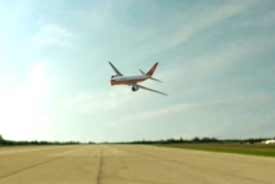 Still, despite having no fuel (and limited control), despite the lack of an air traffic control tower at Gimli, despite the runway that wasn’t a runway, despite the pants-soiling forward-slip maneuvre a hundred feet above the ground, and despite the collapsed nose gear, the plane landed safely with no major injuries to anyone on the plane or on the ground.

Perhaps most shockingly, the plane was repaired on site and then flown back for further maintenance, and continued in service for Air Canada for another 25 years. It retired this January, just six months before the 25th anniversary of its historic flight.

For those of you who prefer your stories in dramatic re-enactment form, though, my favouritest TV show ever finally got around to profiling the flight this season (the two stills above are from this episode). You can watch Mayday: Gimli Glider on Discovery’s website for free.

UPDATE (July 28): Discovery is replaying its Gimli Glider Mayday episode Wednesday at 10pm (repeats Thursday at 2am and 3pm)

The Gimli Glider had its last flight yesterday, almost 25 years after a metric conversion error (along with a few other mistakes) caused an Air Canada 767 to run out of fuel in the air and glide powerless onto a runway at an old military base in Gimli, Man. As the final trip to the Mojave, CA airport (the desert airplane graveyard) took off from Montreal, it flew past the Air Canada hangar to salute the employees who gathered to celebrate its retirement.

For those who didn’t read the book or see the made-for-TV movie about the incident, an Air Canada flight from Montreal to Edmonton in 1983 had a malfunctioning fuel gauge, and ground workers fuelling it manually miscalculated the amount needed through a metric conversion error (the plane was among the first all-metric ones to be flown here). The pilots didn’t find out they were low on fuel until just before the engines died, and ended up landing it without engine power, flaps, half their instruments, a locked nose gear and most of the power assistance for flight controls.

This line from the first article linked below sums it up best:

As Pearson began gliding the big bird, Quintal “got busy” in the manuals looking for procedures for dealing with the loss of both engines. There were none. Neither he nor Pearson nor any other 767 pilot had ever been trained on this contingency.

The story goes on to even more craziness: turning the airplane on its side to lose altitude quickly while on final approach; landing on a decommissioned runway with hundreds of people celebrating a family fun day at the other end (the plane stopped just a hundred feet short of spectators), and the maintenance crew driving up from Winnipeg in a van who got lost and ran out of gas along the way.

But other people recount this story much better than I do. Here are some of the better ones:

It’s one of my favourite airplane stories, and definitely my favourite one that hasn’t yet been featured on my favouritest show ever. (Though they’re planning 10 new episodes this year, so maybe it’s time?)

Amazingly enough, it’s not even the longest recorded engineless glide of a commercial airliner. That honour goes to Air Transat Flight 236, which took off from Toronto and lost fuel over the Atlantic due to a fuel leak. The pilots in that flight had a similar crisis to contend with, only the runway they were headed to was on a tiny island in the middle of a very large ocean.

But the Gimli Glider came first. Before then, nobody had even (seriously) conceived of flying a large passenger jet this way. Its crew instantly became test pilots, and the aircraft itself one giant guinea pig pushed to its limits. After what was sure to be a devastating crash, it required only moderate repairs and left the runway on its own power, going back for repairs and continuing as a passenger aircraft for another two decades.

And for that, we salute you.