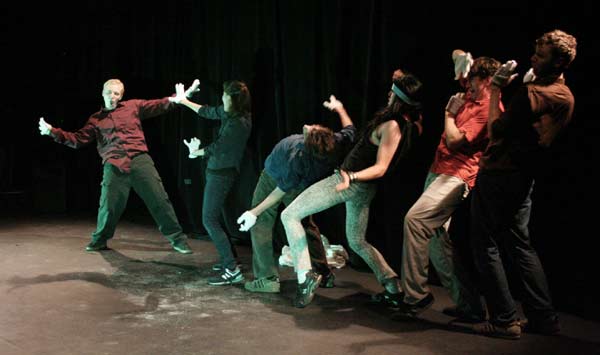 I’ve always been a big fan of comedy, and I’ve lived in Montreal my entire life, so you’d think Just for Laughs and I would be a perfect fit (it’s only a year younger than me). But I’ve never been to a gala, and before last night had never been to any live production related to the festival.

The main reason behind that is money. Why should I pay $40 for a nosebleed seat for a show I’ll get highlights from a few months later on TV?

The other reason is that I’m not easily impressed by comedy. Jokes about relationships and making fun of people’s acccents got old about three decades ago.

But last night, both those problems were alleviated as I stopped by to see the Uncalled For’s Blastback Babyzap production at Mainline Theatre. I’ve seen the group perform improv shows, so I had an idea that there would be some funny stuff going on. And at only $12, it didn’t hurt the wallet to attend.

I must say, I was very impressed.

SPOILER ALERT: If you haven’t seen the show, some of the stuff below may ruin the surprise. But it’s still worth watching.

END_OF_DOCUMENT_TOKEN_TO_BE_REPLACED

Next week at Comedy Works, the greatest of Montreal and Toronto-based improv troupes (Without Annette, On the Spot, Uncalled For, Theatre Ste-Catherine, Bad Dog Theatre) will go head-to-whatever-the-audience-says for five nights of unpredictable hilarity a the 2nd annual Montreal Improv Festival (Facebook link), Tuesday (Sept. 18) to Saturday (Sept. 22).

Considering that these groups individually are worth seeing, the combination is definitely worth the price of admission (between $7 and $12, depending on the night).