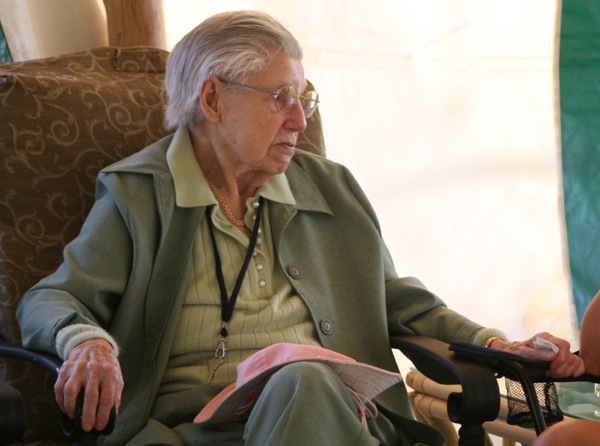 My great-grandmother died yesterday. She was 104.

It wasn’t a surprise. She had been in a coma in the days leading up to her death, and it was just a question of timing. As it turns out, it happened just before my mother was scheduled to come in and do her shift by the hospital bed.

It’s sad, but it’s being met with a feeling of acceptance, and it got me thinking about death, and about the downside of being near-immortal.

I was watching an episode of The Simpsons, recorded on my PVR, when my mother called to give me the news. The episode was one of those this-is-what-the-future-is-like ones, and made jokes about the various technological ways some characters used to extend their lifespans. Just before that I was watching an episode of Buffy the Vampire Slayer, which has also explored the idea of how immortality isn’t the best thing in the world.

Up until very recently, Jeanne Clément (née Béïque) was remarkably healthy for a woman her age. Even in a society where life spans are increasing, the average state of health at 100 is dead. But it wasn’t just that she was alive. It was only a few years ago that she moved out of her home in Châteauguay and (reluctantly) into a nearby nursing home. Well into her 90s she was living alone and independently, doing her daily chores and occasionally getting help from one of her kids.

This story, written two years ago for the local paper, describes her dancing. At 102. I don’t doubt it. By then she had a walker, but she was still quite agile, considering.

Obituary in The Gazette

Her first name was Jeanne, but I can’t think of anyone who would have called her that recently. To the people in her home it would have been “Mme. Clément”, and to everyone else, she was “Mom”, only think of that word spoken with a moderate Québécois accent.

I’d like to say I knew her well, but I didn’t. By the time I was old enough that going to grandma’s house meant something other than finding toys to keep us occupied while the grown-ups talked about boring things, her ability to sit through long social events was waning.

She had 10 children, though by the time I came around it seemed like dozens. Those kids were married, many had kids of their own, and in some cases grandchildren. Even a simple gathering limited only to her descendants and their spouses became a big affair. The photo above was taken at one of those in 2008. The family is so large at this point that while I recognize just about everyone, I can barely remember where people are placed on the family tree.

I saw her once, with my mother, shortly after she moved into her retirement home. We looked at some old photos, and I remember being impressed with how intact her memory was, describing things that happened in a past three times my lifespan. It was like someone from that era had walked through a time machine. In hindsight, I wish there had been more experiences like that, and maybe fewer where I was playing with toys in the basement and counting the seconds until we left for home.

She might have lived to 110 or 120 had it not been for a stroke less than two weeks ago, that left her in that coma. Given her age and the brain damage caused, it made sense to simply let her life slip away and keep her as comfortable as possible.

I don’t have strong feelings either way on the issue of euthanasia or assisted suicide. I think people should be given the power to end their suffering if there’s no hope of recovery. But I also think that opening the door to making such life-or-death decisions could lead to abuse, or to people making these decisions for the wrong reasons.

In this case, at least, the wishes of the patient weren’t really an issue.

“I’d like to drop dead, you know,” she said in an interview conducted a few years ago, back when she was still living at home and in complete control of her faculties. My mother laughed when she heard that statement, entirely deadpan. It wasn’t that this old woman wanted to see herself die, merely that she’d rather a quick death than a long, painful or depressing one. It’s a sentiment my mother shares.

There were also psychological reasons, as much as physical, for not wanting to do on. As fun as it might seem to live to such an old age, my great-grandmother lived to see all her peers die. Her husband, her friends, even one of her children (the latter slowly, from cancer). It’s a depressing thought. When you reach that age, and realize that almost your entire life is behind you, and that you’ve already accomplished almost all of what you’re going to do in your life, there’s the temptation to wonder whether there’s any reason to go on, no matter how healthy you are.

I don’t want to paint the picture of a depressed old woman just waiting to die. She had a long life and raised some great children (with some pretty fantastic senses of humour, at the very least), and I remember her as someone who was caring and well loved. It’s unfortunate I didn’t know her during the decades of her life lived before I was born.

Her funeral will be some time next week. Hopefully, from her children who are now grandparents (and some even great-grandparents of their own) I’ll hear some stories of that part of her life I never knew. And I won’t be tempted to pull that electronic toy out of my pocket to pass the time.

As for my own life, I honestly don’t know. I’d hate to be in a position of facing a slow and agonizing death, and if there was no hope of recovery I’d probably want my family to pull the plug. But it scares the heck out of me to think of being in that position. I have no desire to die. I could see myself living even if it meant nothing more than filling crosswords or watching TV all day. But that assumes my brain still functions and I am not in constant pain.

Hopefully I won’t have to make any tough decisions about my own life for another 80 years. And by then, maybe everyone will be immortal.

If not, I fully expect a statue will be erected in my honour.