The Montreal Gazette had a review copy of the autobiography of John Scott, star of the 2016 NHL All-Star Game. The sports editor offered it to me, and I read it during the week. Here are my thoughts on it, and excerpts from my favourite parts of it. 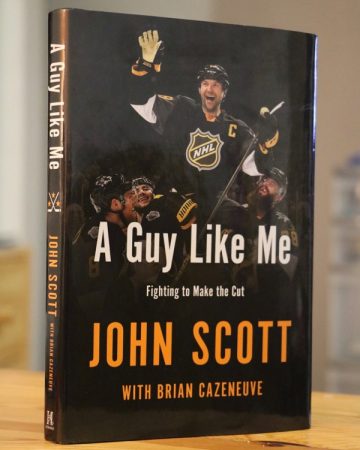 For the first 170 of its 215 pages, John Scott’s autobiography is pretty run-of-the-mill. But then, that’s kind of the point.

If you don’t remember the story that led to this guy becoming famous, he retells it as of Page 171. Spurred by a joke that was eventually traced to a suggestion in a podcast, fans began voting en masse for Scott, then a journeyman enforcer playing for the Arizona Coyotes, to go to the National Hockey League All-Star Game. Not because he was a big star with a lot of talent, but because he wasn’t. Fans had earlier tried and failed with something like this with the Vancouver Canucks’ Rory Fitzpatrick. (And for the 2015 game, a more positive-minded campaign from Latvia sent Zemgus Girgensons to the top of the all-star ballot.) But this time, the online trolls were successful in voting Scott in as the team captain for the Pacific Division at the 2016 all-star game.

It’s largely what happened after that announcement that made him a story, and turned him from an also-ran NHL nobody into an unlikely hero. The team, and the league, tried to convince him to decline the invitation. He was then traded to the Montreal Canadiens in a deal that made little sense, and Scott was immediately sent to the AHL’s St. John’s IceCaps. Canadiens GM Marc Bergevin explained that he was forced to take Scott in the deal, without giving details.

Despite everything, Scott went to the game, where he became a media star and fan favourite. He scored two goals in the semifinal and was a write-in winner as MVP of the event, with the prize being a new car.

Scott played only a single meaningless NHL game with the Canadiens after that, the team having already been eliminated from playoff contention. After the 2015-16 season, he retired from professional hockey.

Scott’s take on the all-star game, and some entertaining highlights from his career (including missing his first NHL game because he didn’t have his passport) are already public thanks to two pieces in the Players Tribune: One at the time of the all-star game and another from December when he announced his retirement. That’s all in the book as well, along with information about how he grew up, the course of his career and, because there are so few of them, descriptions of all five of his NHL goals.

But since the book is told chronologically, it’s a long wait until you get to the part that made him famous. Scott begins with his childhood, playing hockey on a backyard rink in St. Catharines, Ont. He talks about going to Michigan Tech University and playing college hockey there, meeting his wife there, signing a professional contract and playing for what would become seven NHL teams.

Co-authored by Sports Illustrated’s Brian Cazeneuve, the book is very matter-of-fact about the events of Scott’s life, his feelings and opinions. You won’t see adjective-laden scene-setting descriptions. Rather, it’s short and simple sentences relating the things that happened. Like you’d expect from a guy whose university education was in engineering. But the style leads to some passages being kind of boring, when he goes off on a tangent that makes you wonder what the point is.

I was fascinated by the John Scott story when it happened. About a regular guy being bullied by people he’d never met, and turning into a superstar just by being a decent person. About someone who, when people talk about the most talented players faking injuries in order to get out of the all-star game, was just so excited for the chance to go.

But at the same time, Scott would never have been at the all-star game if not for the heartless lulz of NHL fans. The only way to prevent another case like this is to change the rule to prevent someone like him from getting to the game in the first place. Maybe you can make the argument that Scott represents a type of player that’s necessary for the game, or you can accept that he’s a Cinderella story and not think about it too much. But the people who are happy with what happened to him are also the ones who thought he shouldn’t have been invited, myself included.

Scott is far from perfect. He’s a goon who was suspended more than once by the NHL, and he has a DUI on his criminal record (something he called the worst mistake of his life). But he’s a smart guy, and his heart seems to be in the right place, so you can’t help but root for the guy.

We don’t learn much more than we already did about the all-star game and leadup to it. Scott won’t say which NHL official brought up his daughters to try to convince him not to go. But we get more detail of the conversation, which really makes the league look bad. And we get some indication of the petty things the NHL tried to dictate, like the jersey he wore and even changing the skills competition he would play in.

But the book ends on a positive note, about how great the experience was, about his brief time with the Canadiens and about the early plans to maybe make a movie out of his experience.

Even though I already know what the plot would be, it’s a movie I’d like to see.

END_OF_DOCUMENT_TOKEN_TO_BE_REPLACED

January was quite the month for John Scott, a hockey player who started out as the butt of a joke and ended up as the National Hockey League All-Star Game Most Valuable Player.

There’s been no shortage of think pieces about Scott, especially over the past week. Most have decided to blame the NHL’s senior management for mishandling the issue, for holding a fan vote, for having Scott be eligible, for trying to convince him not to go and then for mysteriously engineering a trade that conveniently sent him to an American Hockey League team 5,000 kilometres away. (The league denies trying to prevent him from coming, but Scott himself said they tried to shame him out of it by invoking his kids.)

There’s no doubt the league mishandled the situation after Scott was chosen, and fumbled its way through trying to make good on it. But the NHL didn’t pick Scott for the all-star game. The NHL didn’t decide that humiliating a journeyman NHL player would be hilarious without caring what it would do to that guy. The fans did that.

So why aren’t they getting the blame from anyone (besides Don Cherry)?

I followed the John Scott story closely over the past little while, partly because he’s now in the Montreal Canadiens organization, but also because I related to him.

I was bullied in high school, pretty badly. There might have been one or two people in my high school who got it worse than me, but on the social hierarchy I was pretty near the bottom. I won’t bore you with details, but the torment was pretty standard for high schools in the 90s.

It was in my last year or two of high school, when during the lunch period there was some sort of vote on something. I don’t remember what it was, what the prize was, but I remember my surprise when one of my fellow students — one of the many who regularly bullied me — called out my name.

I didn’t get it. I hadn’t suddenly become popular. Why did these people vote for me? Why were they happy I won?

Then there was that time that a pack of girls brought me into an AV room and flashed me. (Well, not really, they were lightning fast and didn’t lift their shirts all the way, so I never saw anything.) What the hell was that about?

Had I become so uncool that I was now really popular? Like a reversal of coolness polarity?

No, I was still the butt of a joke. Things got better as people matured (including me), but my classmates didn’t look up to me, they were still looking down, and laughing.

I thought of that while following the John Scott story. He experienced something similar, but on a much larger and more public scale.

NHL fans decided to vote him in as a joke (and let’s not kid ourselves, that’s how this started), but Scott refused to bow out and instead approached the event with an enthusiasm that brought many more fans to his side. The love-in only got stronger through the events, culminating in him being hoisted on his teammates’ shoulders after scoring twice in the All-Star Game.

But that doesn’t shift responsibility for the fan vote that got him there. That doesn’t change the fact that John Scott was the victim of bullying on a massive scale.

Greg Wyshynski, the Puck Daddy blogger who first blurted out Scott’s name during a podcast, which sparked the campaign to vote for Scott, accepted some responsibility for starting it all. But while he spent a few seconds mocking Scott, he didn’t orchestrate the campaign to flood NHL all-star voting with votes for him. The Internet trolls on Reddit and elsewhere did that.

They need to accept responsibility for what they did, and not take the storybook ending as proof that the ends justified the means. They’re the villains of this story that Scott vanquished, not the fairy godmothers that gave him a happy ending.

The NHL has some responsibility here, too, of course. The idea of voting in someone as a joke has been around for years, since Rory Fitzpatrick almost got selected in 2007. And the selection of Zemgus Girgensons, while for positive reasons (Latvia wanted an all-star, and its citizens made it happen), should have reinforced the idea that fan voting can have unexpected consequences. And if it’s true that the league tried to pressure Scott or even forced the trade that may have banished him to the AHL, it needs to apologize for that.

And maybe there should be changes to the all-star selection process. Not a preselected list of qualified candidates, but some minimum qualifications, such as a minimum of NHL games played. The league might also consider measures to encourage more people like Scott, role players who never lead the league in scoring but are beloved by fans and teammates alike, to join the all-star festivities.

But the biggest change I’d like to see is in fans’ mentality. You’ve proven you have the power to manipulate the results of an online vote. Now maybe you’ll give it some more thought before making some poor hard-working guy you’ve never met the butt of your stupid joke.

In the meantime, congratulations John Scott. I hope you had as much fun participating as we did watching it. And I hope we’ll get to see you scoring some goals in Montreal soon.