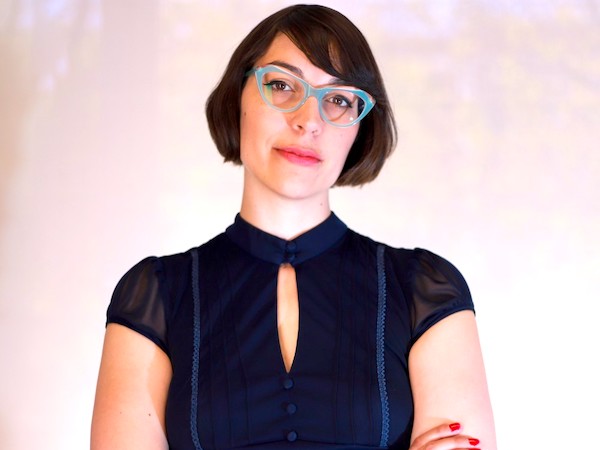 Julia Caron is the new host of Quebec AM (photo: Simon Dumas, via CBC)

I learned a lot about Julia Caron this week, after CBC named her the new permanent host of Quebec AM, the radio show in Quebec City broadcast throughout the province except Montreal and Gatineau.

Over a longer-than-I-expected phone call, she told me about her childhood, her education, her family, her career. But beyond that, I was also interested in hearing from someone who has worked in English in Quebec City for more than a decade about why an anglophone might like to work in a place where few people speak the same language.

But Julia Caron is not an anglophone. Nor is she a francophone. She’s an interesting hybrid of the two, which helps make her a good fit to succeed Susan Campbell in the big chair of that small studio on rue Saint-Jean.

Caron, 34, was born in Halifax, but moved out of there when she was three and spent most of her upbringing in Ontario as part of a military family. “Name a military base in Ontario and I lived there,” she tells me half-jokingly.

The closest thing she has to a home town is Petawawa, Ont., northwest of Ottawa and right on the border of Quebec. Her maternal grandparents live there.

“People like to guess that I’m a franco-ontarian,” she says. And that’s sort of true. Until moving to Quebec City in 2007, she’d never lived in this province, even though all her grandparents have a connection to it. But the franco part isn’t accurate.

“I hate it when people ask me if I’m a francophone or an anglophone,” she says. (She prefers to call herself a franglophone.)

In 2007, the last year of her undergraduate degree studying women’s studies and history at Trent University in Peterborough, Caron took part in an exchange program between Quebec and Ontario. It was a way to ensure she wouldn’t lose her French.

She worked as a tour guide at J.A. Vachon in Ste-Marie-de-Beauce. “Any questions you have about the benefits of Jos Louis,” she told me with a laugh.

“I just felt this warmth here,” she said.

For a while, she did what comes naturally to a fully bilingual person in Quebec City: teaching English. But it was hard to earn a living that way, and riding a bus an hour and a half from Cap-Rouge downtown to teach a one-hour course was not ideal.

In December 2009, the Olympic torch made its way to Quebec City, and Caron decided to check it out. At one point a journalist asked if she spoke English and could talk about what was going on for the radio.

The journalist was Jacquie Czernin, whose name and voice was very familiar to Caron as an avid CBC Radio listener at the time, but whose face she didn’t immediately recognize.

“After she finished interviewing me, she asked me: are you looking for work?”

Finding someone who can articulate well in English in Quebec City isn’t easy.

Czernin “strongly encouraged me to send my CV to Kim Garrity, who is now my producer,” Caron said.

Caron has worked for CBC in Quebec City ever since. Mostly it was an off-air role, as the researcher for Quebec AM or researcher-technician for Breakaway, a job she still officially had until this week’s announcement. (“Apply for my old gig, it’s a great one,” she interjects.) She also filled in as CBC’s travelling journalist, reporting from communities across Quebec.

With the Quebec AM host chair vacated by Susan Campbell, first as part of a medical leave and then choosing to try another role at CBC, Caron was brought in as a fill-in host, and applied for the permanent job in February.

“It’s been a super-long process,” she tells me. (Even by CBC standards this took a while.) “The pandemic changed everything.”

Since she was already doing the job, and had so many ideas for the show that her interviewers had to ask her to stop listing them, the choice was pretty clear.

So what should listeners expect from the new Julia Caron Quebec AM?

Not much change, at least in the short term. The COVID-19 pandemic has shifted most other things to the back burner. “The focus is really on the audience and what they need to know, because things are changing day by day,” she said.

But eventually,  “you might hear a bit more of my passion for the arts,” she said. “It’s one thing I really love doing as a host and haven’t been able to do for a while.”

She also has a bunch of story ideas. One she was willing to share:

“There has been such an expansive appetite for camper vans in Quebec,” she said. Caron bought a 1976 Dodge Tradesman 200 van in 2015 “and it’s been an amazing way to see the province relatively on the cheap.”

Expect to hear about that soon.

And expect to hear more about Caron’s love for her home.

“I absolutely adore everything about Quebec City,” she says. “It’s such a huge privilege to get to (work in English here). … Our listeners are so kind, they’re the kindest people I’ve met in my whole life.”

I asked her what she would say to an anglophone who was considering moving there for a job. Her answer was short: “Do it.”

Despite what outsiders like myself might think, “there is a surprisingly active English-speaking community in Quebec City, you just have to know how to find it.” Even she took a while to find out where anglo culture was thriving there. It may not be the most diverse community, especially when you’re comparing it to greater Toronto, but it’s alive.

“I still would not live anywhere else,” she says.

Not that she could just pick up and go if she wanted to.

Caron was going to see a concert featuring the Canadian indie-pop singer and indie rocket Chad VanGaalen when she met a man named Simon “who very quickly charmed me.”

“After my summer in Quebec he promised to visit me in Ontario. I didn’t believe him (but) he did.”

They’ve been together ever since and have a four-year-old daughter together. So she’s in this to stay.

Quebec AM airs 6-8:30am weekdays on CBC Radio One on the Quebec Community Network (CBVE-FM 104.7 and transmitters throughout the province). You can follow Julia Caron on Twitter and Instagram.

Nancy Wood leaves anchor chair: Meanwhile in Montreal, Nancy Wood announced she is leaving her anchor chair this summer, at least temporarily, to join the web desk and try something new. “I may or may not come back to TV…we’ll see how it goes!” she writes. Sean Henry moves from weekends to fill in for her.