And finally, as a demonstration of the excellent reporting skills that the Journal is missing because of this lockout, I give you this Rue Frontenac report on the Snuggie.

Still recovering from elbow surgery that has had him sidelined since November, New Jersey Devils goaltender Martin Brodeur has been welcomed into the fold of Rue Frontenac, the website published by locked-out Journal de Montréal employees. They even got a formal news release issued to mark the signing. Financial terms, if any, were not disclosed.

Brodeur was a columnist for the Journal de Montréal before the lockout, and made it crystal clear that he would not write for the paper in the event of a labour disruption. 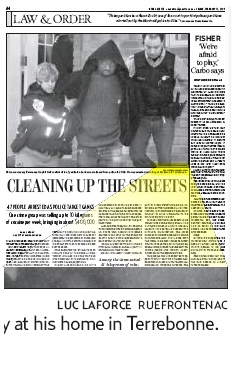 Noticed this photo in my newspaper the other day. It’s on top of this story about police sweeping down and making dozens of arrests in an anti-gang operation. The original photo, taken at 6am, can be seen on Rue Frontenac’s website.

So not only are they providing enough material for their own website, but they’re doing enough journalism to be able to freelance it to the Journal’s competition.