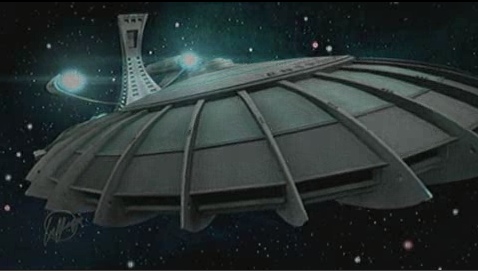 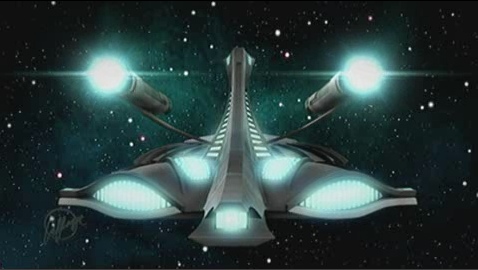 You know what, I have to admit the Olympic Stadium actually makes kind of a cool futuristic-looking spaceship.

This is the starship Entrecrise of Stade Trek, part of the end-of-year special of Et dieu créa … Laflaque. It and the other new year’s eve special programming of Radio-Canada (Infoman, Tout le monde en parle) is available for online streaming until the end of January. 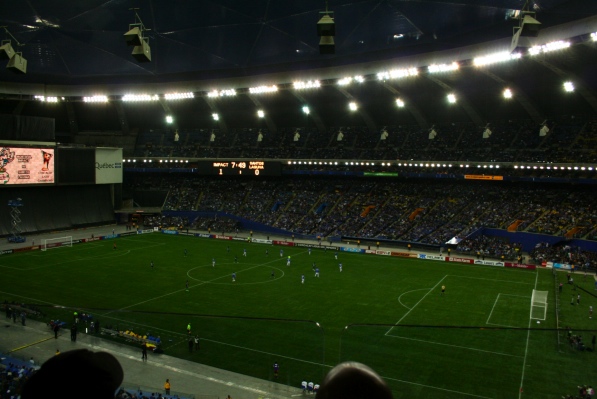 The news came just after halftime last night: There were 55,571 tickets sold for the Impact’s CONCACAF quarterfinal game against Mexico’s Club Santos Laguna at Olympic Stadium. That’s more than four times the 13,000 capacity of nearby Saputo Stadium where the Impact play regular-season games. (Though they might want to consider increasing that after all the demand this game has sparked.) 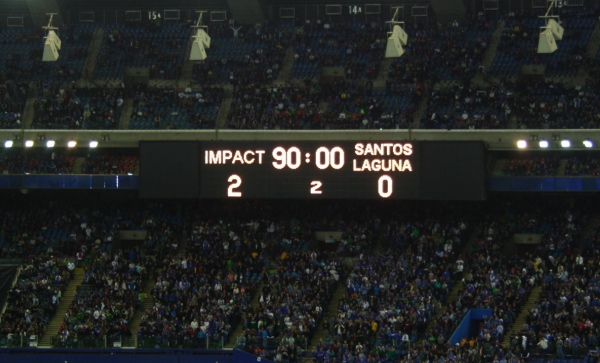 Of course, all that came secondary to ending the 90 minutes (plus three minutes added time) with a 2-0 lead on Santos Laguna. Both teams play the second game in Mexico and whichever team has more goals at the end of both games advances to the semifinal. That means the Impact can lose by a goal in that second game and still advance. Good news. 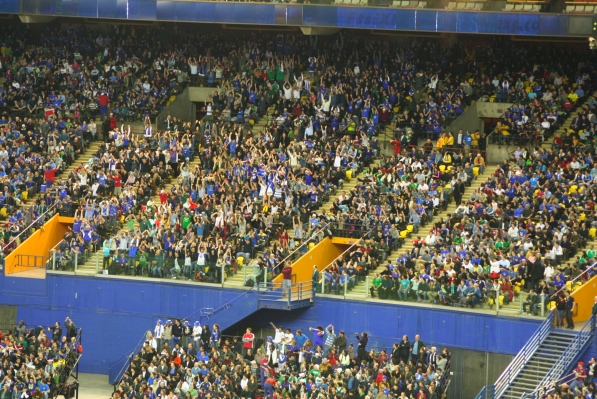 Impact fans do the wave

To me, more interesting than the game itself (the first goal came in the first five minutes, the second at the 77th minute, so there was a lot of dead time in between) was seeing the Olympic Stadium filled with fans for a soccer game. Those familiar with its sorry history know that this kind of activity is the exception rather than the rule. It’s rare even that the top balcony is opened up. But this time it was nearly full, with only the very far corners having empty seats. To be sure, the Grey Cup last fall had more people, though those tickets weren’t sold for $10 apiece. 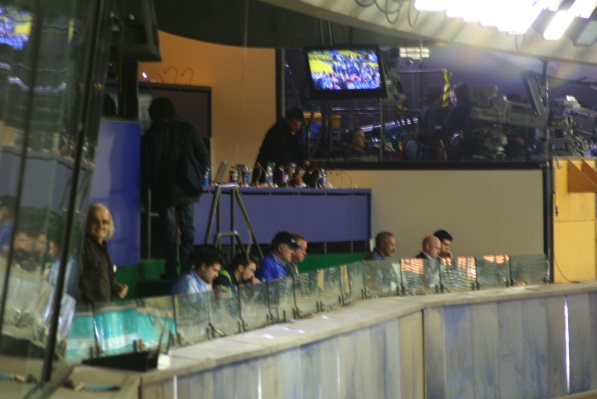 Press box at the Olympic Stadium. Bonus points if you spot The Gazette's Randy Phillips, who had to rush to make deadline.

I spent $20 on my ticket in the 300 level, in a small room (about 100 seats) near the press box. It had the advantage of being able to see the whole field while not being too far away from it. 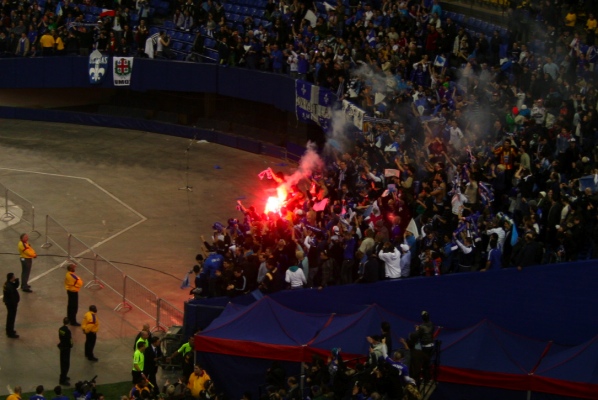 But I was a bit far away from the crazy fans, who emptied cans of blue smoke, set off flares and held their arms forward as if to bestow spiritual essence descended from Jesus himself onto the players on the pitch. 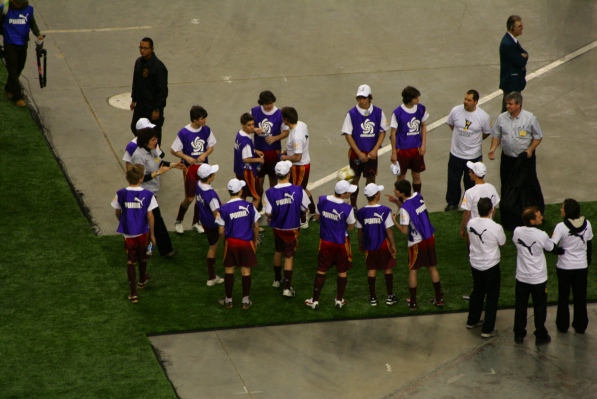 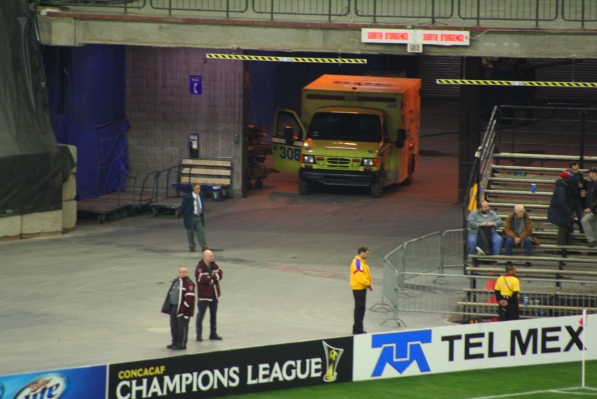 An ambulance stands ready during the game

In the far corner, an ambulance (and its first responders) stood ready in case of any medical emergency. With that many fans in attendance, the stadium became the size of a small city. A small city that wants $4 for a coke or a hot dog. 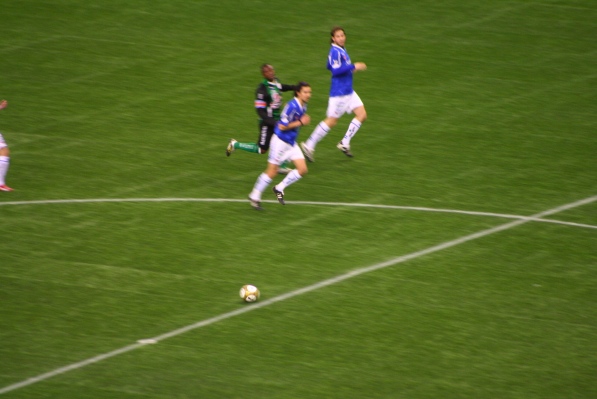 And some people played soccer too

I’ll spare you photos of the game itself. Professional photographers lining the pitch had a better angle and better cameras. Instead, I’ll give you an idea of what 55,571 people look like: 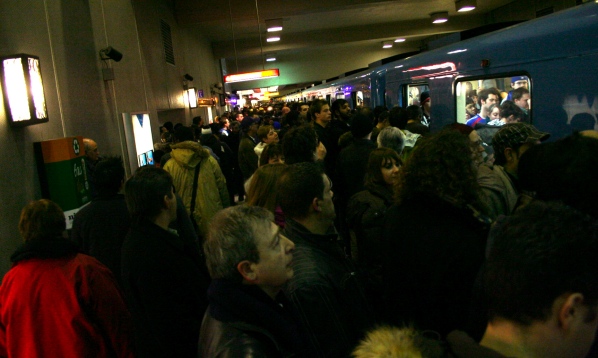 It was only when I got to the platform at Berri-UQAM that I remembered that tens of thousands of people heading to a soccer game causes a bit of a traffic jam. The STM added extra trains to and from the stadium, but even then I had to wait for the third train before I could get aboard.

After being crammed into a metro car from Berri to Pie-IX, getting a bit too familiar with random people around me, I got off and joined another sea of fans trying to get from the metro to the stadium. Pie-IX is specially designed to handle large crowds, but it was easily overwhemled during the hour before the game.

Five minutes to go, and the crowd inches forward

I found myself stuck in a giant crowd of people in the hall leading to the stadium, with only minutes to go until the scheduled kickoff, mentally berating myself for not having left earlier. In the end, the traffic cleared up a lot easier than I had anticipated, and there was no line at the ticket office, so minutes later I was searching for my seat (holding an Impact T-shirt that I’d just bought at the only slightly overpriced rate of $20). 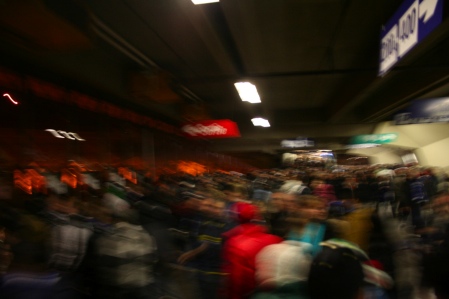 Post-game chaos leads many to go outside

After the game, the same thing in reverse. Many decided that taking the tunnel to the metro would take forever, and instead opted to go outside. I was one of those people. 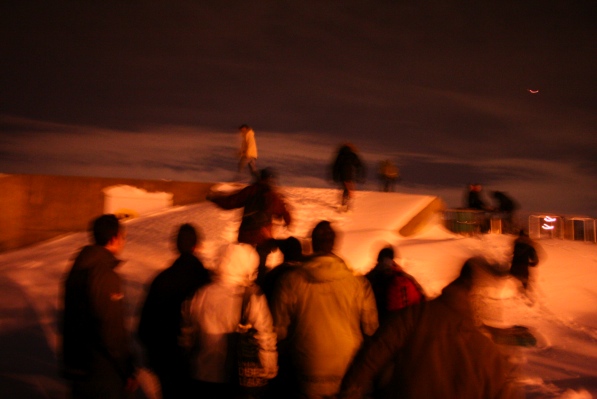 Every man for himself!

Rather than take staircases to get to the footpath, lots of (young) people climbed walls and steep hills in the snow. I ended up freezing a couple of fingers trying to get my grip on the ice. They stung for a few hours but appear to have fully recovered. 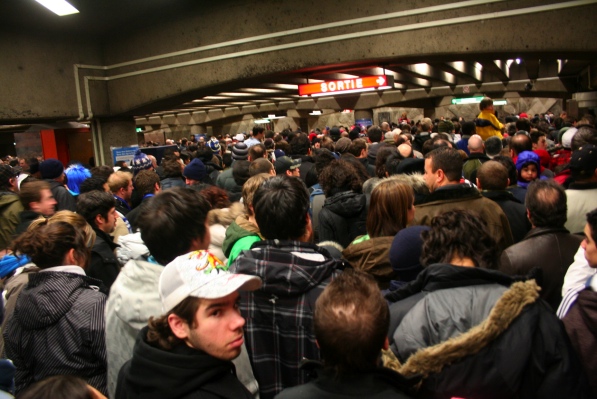 Once I found my way to the metro, it was the same thing again. Fortunately the STM were out in full force along with local police, and the process was smooth. 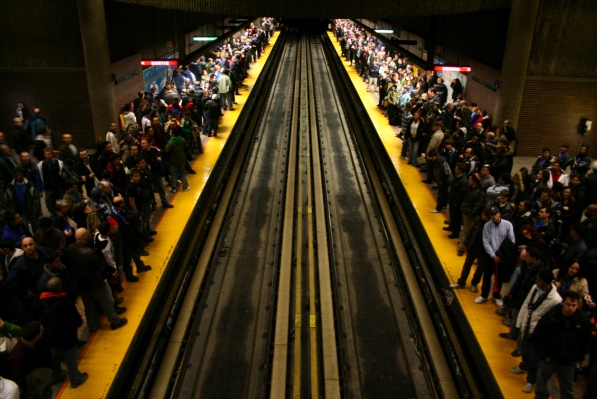 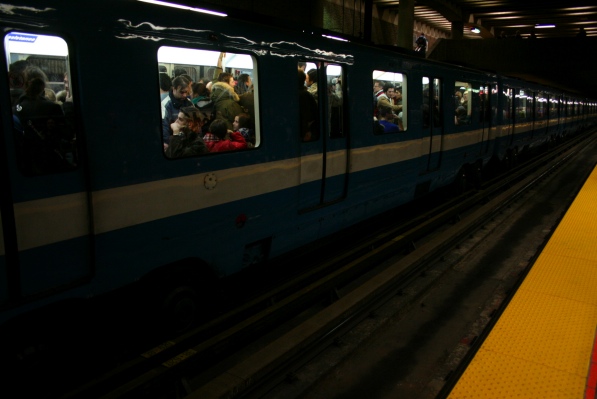 *Of course, not all of the 55,571 people were Impact fans. Some were cheering Santos Laguna. And they got some good-natured ribbing from the local hooligans after the game. 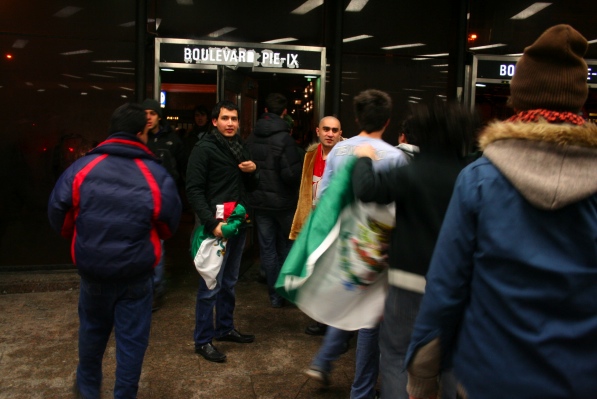 Mexico fans after the Impact game

Sounds of the game

My personal media player has recording capabilities, so I decided to test them out. It’s actually not all that bad. So here’s two minutes of the most cliché crowd sounds you can hear:

The Montreal Impact got the word last night: the weather will not be an impediment to their hosting Mexico’s Club Santos Laguna at Olympic Stadium at 8 p.m. tonight.

There are still plenty of tickets available (the Big O’s capacity is about 65,000, depending on how many seats are added to the floor) at rates ranging from $10 to $50, from Admission or at the Olympic Stadium ticket office. Fans are asked to wear blue to support their team.

If you’re a wuss and can’t make it out, the game will be carried live at 8pm on:

The main CBC networks will carry it delayed: Radio-Canada at 11:30pm and CBC at midnight.