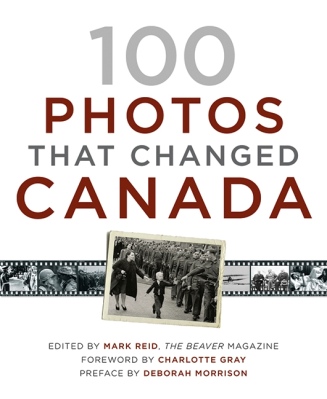 The book is called 100 Photos that Changed Canada. The premise is obvious. Or at least it should be.

Over 30 writers enrich the photos with in-depth commentary, creating a complex tapestry of experience that is nostalgic, entertaining, sometimes shocking, but always memorable. A book full of reminiscences, a book to browse through and share, this beautifully designed gallery of images offers a fascinating, often personal, perspective on great moments from our history. With introductory comments by Charlotte Gray, Deborah Morrison and Mark Reid, and noted contributors from across Canada, this will be the gift book of the fall.

So the photos are paired with stories about them, written by some big-name writers. Those writers get mention in the blurb about the book, and their biographies are in the book, as well as being attached to the texts written by them next to the photos.

But while the writers are put on a pedestal for their works of art, the people who took the 100 photos that changed Canada are getting the shaft.

CBC.ca has a slide show of a selection of these photos. It includes a giant picture of editor Mark Reid at the beginning. It goes on for six minutes and 43 seconds about seven photos used in the book. Each photo is given a title and gets a nice long description by Reid. At no point, not in Reid’s description of the photos, nor in the title graphics that precede each one, is the name of the photographer mentioned or displayed.

Similarly, CTV’s website also has a slideshow. Every slide includes Reid’s name, but not one mentions the name of the photographer who took the photo.

People don’t go into photojournalism to make money. They don’t go into it to become famous (photo credits are usually hidden in corners and are smaller than bylines). They do it because they have a passion for the art. They don’t ask for parades to be thrown for them.

But if you’re going to publish a book about what you pretend are iconic photos, to diminish the role of the photographer to this extent is simply disrespectful.

Considering your name is on the cover of the book (even though the work inside was created by others), clearly you understand the value of credits.

Its website no longer exists, but MédiaMatinQuébec’s name came up this week as the News Photographers Association of Canada announced the winners of its annual photo awards. (As is the tradition with photographers, the list is filled with typos and formatting errors.)

Unfortunately, there’s no gallery so we have no idea what these photos look like, but I’m sure they’re lovely. The press release announcing the nominations last month has some simple, vague descriptions which might help.

MédiaMatinQuébec, the strike paper put out by locked-out workers at the Journal de Québec until a deal was reached last summer, got first place in the spot news category, for a photo of a sky diving fatality from Benoit Gariépy.

Other Quebec winners include:

What the Chronicle piece doesn’t mention is why McCabe doesn’t work for them anymore. According to McCabe, the paper (or its owner Transcontinental) decided last year to go from using him as a staff photographer to abusing him as a freelancer and getting him to work for pennies. McCabe said no, and now he’s getting recognition worldwide for a photo his former paper would have paid about $20 for.