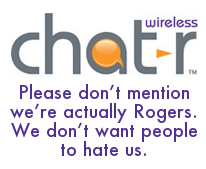 Rogers yesterday launched a new wireless “brand” called Chatr, which is being rolled out in several Canadian cities and is supposed to come to Montreal soon.

The launch has caused some ruckus because its pricing plan is seen as targeting one of the new wireless competitors just starting up. Mobilicity, which says Rogers is using predatory pricing to drive it out of the marketplace, says it will take legal action.

I’m no mobile pricing expert, but $45 for unlimited talk and text doesn’t seem unfair to me. And bringing everyone’s prices down was the entire point of having new entrants into the wireless market, no? (Admittedly, the fact that Chatr is available only in the largest cities is kind of suspicious since it uses the Rogers network.)

What bothers me about this launch isn’t the fact that it’s competing with other wireless providers, it’s that Rogers is doing its best to fool people into thinking the service has nothing to do with Rogers.

Take a look at the press release. The word “Rogers” doesn’t appear anywhere. It makes a vague reference to “a trusted network”, but no mention of what network that is. The blurb “about chatr wireless” also makes no reference to Rogers, making it seem as if this is an independent company.

Same thing on the website (which is neither chatr.com nor chatr.ca, meaning Rogers has picked this stupid name without even getting the benefit of the stupid name domain name). Not on its frequently asked questions page, its coverage page, or its “about chatr” page. This isn’t just being forgetful or not wanting to draw attention to something. There’s a serious effort here to hide the fact that Rogers is behind this brand.

They’re all doing it

This is nothing new. When Koodo launched in 2008, Telus did everything it could to hide the fact that they were behind it. The word “Telus” doesn’t appear on Koodo’s “About Us” page or coverage page either. You have to go to the fine print of the privacy policy, and read its fine print to see them say that Koodo is actually a division of Telus.

Virgin Mobile Canada makes it seem as if they’re owned by Virgin Group, but in fact it’s owned by Bell Mobility, a name that appears nowhere on their website.

Of the virtual brands, only Solo Mobile (Bell) and Fido (Rogers) make it clear who they’re owned by.

Let’s count that, by the way. Eight mobile brands run by three companies. And I’m not counting the weird stuff involving third parties like Petro Canada Mobility or President’s Choice Telecom. While most companies think of centralization and imposing a national brand on its subsidiaries, Canada’s wireless companies do the opposite.

When your reputation as an industry is so shattered that you have to create fake competition to appeal to a large segment of the population that hates you, and then when that doesn’t work you create a second fake competitor … honestly, I don’t know what to say.

The worst part is that Canada’s Big Three wireless companies don’t think this explosion of “brands” is evidence of a larger problem.

Hey, remember last year when Bell and Telus said they were going to start charging for incoming text messages (in addition to outgoing text messages), and Rogers countered that they had “no plans” to do the same, especially because that move encouraged people to switch to Rogers?

Uncoincidentally, this news comes on the same day Rogers announces that it’s going to integrate with Twitter, allowing the microblogging service to send updates to users’ phones.

Of course, like Bell and Telus, Rogers says this won’t change anything for most customers who have text messaging included in their plans, and they assure us that charges will be cancelled on spam messages (customers just have to fill out Form 18459-B in quadruplicate and have it signed by a notary, waiting 6-8 months for a credit on their bill).

Isn’t it great that our telecom universe is a three-player oligopoly where each company sets policies to mimic the others, for good or bad?

Oh, and a side note to that Twitter thing: Rogers released separate press releases for Rogers Wireless and Fido saying just about the same thing. A quote from Twitter changes only the name of the brand:

“We’re thrilled to be working with Fido,” said Kevin Thau, Twitter’s Director of Mobile Business Development. “Twitter is a real-time messaging service for sharing and discovering what’s happening – right now. By partnering with Fido, customers using Twitter can now view, post and reply to messages within their text messaging plans, ensuring the application stays affordable and true to its real-time nature.”

I’m not up on press-release ethics, but I can only conclude two things here: Either the release is lying to us, or Rogers made Kevin Thau say the exact same text twice, changing only the name of the brand.