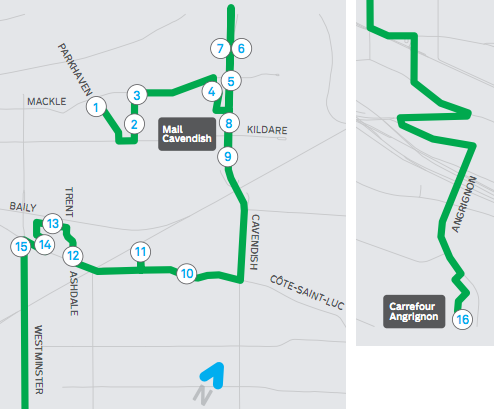 Last week, the STM launched two new seniors’ buses, bringing the total to 10. These routes, served using minibuses, take winding routes through neighbourhoods on select weekdays, stopping at residences, shopping centres, CLSCs and other places that would be of interest to seniors.

The plus side is that seniors get door-to-door service with a driver who isn’t rushed by rowdy schoolkids. The minus side is that the routes are slow and the schedule is atrocious: departures are more than an hour apart and service is only offered on some days of the week.

The STM started the seniors’ buses with two routes in the west end in 2006 – one in Côte des Neiges and the other in N.D.G. Both lasted about a year before they were canned due to lack of ridership. Still, they soon launched other buses, mostly on the eastern side of the island: Montreal North, St. Michel, Rosemont, Rivière des Prairies, Hochelaga-Maisonneuve, Mercier, Anjou, and one in LaSalle. Most follow the same idea, offering service between rush hours on two or three weekdays. And for some reason, the STM has deemed these successful enough to keep them around longer.

Now they’re coming back to the west side, going after an area that has a lot of seniors and not much public transit.

The 262 Côte St. Luc (PDF) starts in the area around the Cavendish Mall, then down Cavendish and Côte St. Luc Road until Westminster. From there it heads non-stop to the Carrefour Angrignon shopping mall (though not to the nearby metro station). It has four departures in each direction on Tuesdays, Wednesdays and Thursdays.

The 263 Bordeaux-Cartierville (PDF) passes through the residences near Acadie Blvd. on the east side of Highway 15, then goes along de Salaberry, O’Brien, Gouin and Laurentian, and non-stop to the Place Vertu shopping centre. Again, no stop at a metro station. The bus also has four departures in each direction, but on Mondays, Wednesdays and Thursdays.

The buses are designed and marketed for seniors but accept regular fare and passengers of any age (though this isn’t made abundantly clear and even some drivers have apparently been under the incorrect impression that it’s reserved for those over 65).

I’ve never been one one of these routes, and I don’t know what their ridership figures are like, but fortunately we’re only talking about a minibus or two for six hours two or three times a week, so the cost is fairly low for each route.

Now that they’ve been in service for almost a year, the STM will be evaluating the “senior” buses running through Côte-des-Neiges (21) and NDG (23), and disappointment with their popularity might lead to them being cancelled.

Is anyone surprised? Let’s go over why these routes were a bad idea in the first place:

These routes, which were launched with much fanfare last June, were quite possibly the worst the STM have ever come up with, and that showed after the initial novelty quickly wore off with seniors.

What’s hilarious about this is that the borough mayor, Michael Applebaum, is worried about wasting money. Why? Each route uses only a single bus for four hours a week. Compared to the cost of running a single regular route (like, say, the underused 138), it’s barely a drop in the bucket.

Next time, focus less on the colour of the bus stops and more on how useful a new line will really be to users. There’s nothing special about seniors that will cause them to embrace crap.