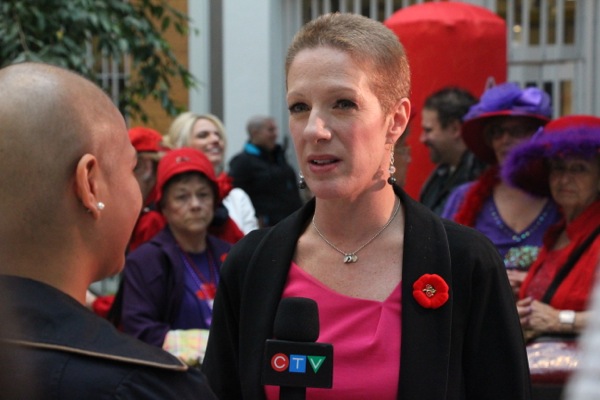 Well, she didn’t go all the way. They didn’t bring out the razors. And in fact, between her, her cameraman and her boss who were there, she’s still the one with the longest hair. But there’s no mistaking that Christine Long looks different today than she used to.

“Tomorrow mommy’s gonna look pretty scary,” Long told me on Halloween night, after taking her kids trick-or-treating. It was a joke, of course, there’s nothing scary here. And despite all the cracks directed at her, she didn’t feel nervous or worried at all. If anything, she was eager to get it done.

Long has been trying to shave her head for six years, she said. But being a TV reporter, her bosses had resisted allowing her to do so. She credited the fact that Virgin Radio and CTV are under common ownership with helping to push it toward happening. (Going over her boss’s head to new station manager Louis Douville might have also had an impact.)

Jed Kahane, CTV Montreal’s news director, had a slightly different history. Yes, they weren’t crazy about it in the past, but it was more the seriousness of the proposal this time that prompted them to finally agree.

Either way, CTV now has a reporter with a lot less hair.

“I was like, you know, I’d like to do more than write a cheque,” Long said of her decision to go along with it. As a CTV personality, she’s hosted plenty of events for cancer fundraisers and other charities, and she felt the need to give back in some tangible way.

And because she’s on TV, she wanted to show to women who are going through cancer treatment that there’s nothing wrong with having a bald head or a short head of hair.

Ultimately, she said, her goal is that women who have gone bald will feel less self-conscious about going out to the grocery store without a hat or a wig. She wants to normalize the look.

And so, she says she won’t be hiding her new hairstyle as it grows back, though she’ll be keeping her head warm and admits she loves hats.

The hair hasn’t been put to waste. It’s been donated to the CanDonate hair program, which creates free wigs for children under 16. Long said she hopes to follow the progress of her hair and talk to the child who receives it.

At least in the moments after it happened, Long was relieved more than anything else. She needed a haircut.

And she’s excited to see it grow back. “By Christmas, I’ll look like Justin Bieber.”

She’s promised her husband she’ll only do this once. Both of them seemed pretty sure she’d stick to that promise.