In Thursday’s Gazette, I noticed a mostly-text ad from the Station des Sports, signed by local … uhh … entrepreneur … Peter Sergakis, who owns the bar and many other bars around town. It was to thank people around the sports bar for supporting its plan to expand its footprint.

As you can imagine with these ads, there’s a lot of missing context. The project has been under fire recently because of Sergakis’s use of a “loophole” in the law that allows him to bypass a register (that could force a referendum on the subject if it gets enough signatures) by having more than half the people affected sign a petition.

The ad itself isn’t what surprises me, though. What’s interesting is that the ad turns onto a different page. Like newspapers that (used to, at least) start major articles on the front page and continue them inside, this one ends a colour ad on Page A3 with “advertisement continued on Page A8”. 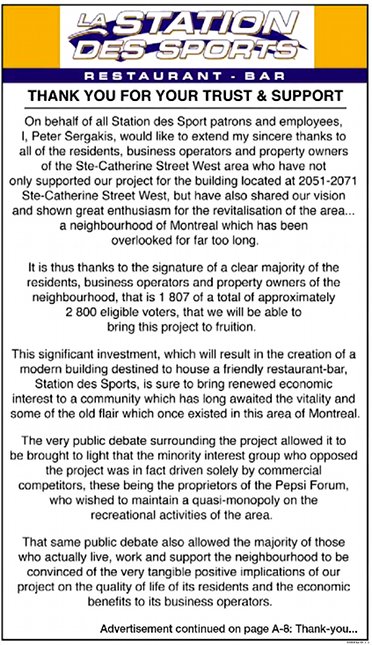 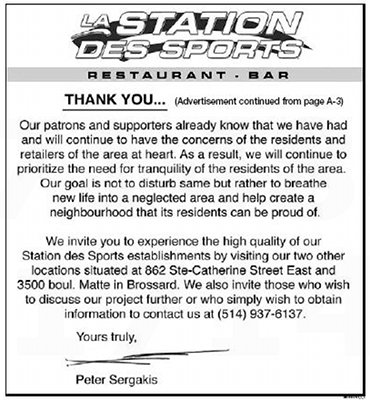 Not something you see often in advertisements. Most likely this was done because A3 has colour and exposure but limits the space given to advertisers to ensure most of it is editorial copy.

Why is this a loophole?

Anyway, back to that loophole. In this city, if you don’t like a by-law change that affects the area immediately around where you live, you can sign a register to demand a referendum on the subject. If you get the required number of signatures, the city/borough must either hold a referendum or withdraw the project.

The “loophole” is a little-used way to get around this, by having more than half the people who would be able to sign that register and vote in that referendum sign a petition supporting the project. So if the area around a new development had 1,000 people, you’d need to get 501 to sign a petition and then there wouldn’t be a register or referendum.

The reasoning makes sense to me. If those 501 support the project, why bother having a referendum where they would, presumably, all vote no? How is this a “loophole”? Isn’t it just democracy at work.

I asked around, and the answers I got pointed to how ancient and unused this law is, and how it wasn’t designed to be used in this way (even the city admits that). I see that, but it hardly makes it undemocratic.

On the other hand, though, far fewer people are required to sign a register to force a referendum than sign a petition to quash one. And again, if more than half the affected residents support the project, isn’t that still the will of the people? Or should the minority overpower the majority?

What’s left unsaid in calling this a “loophole” is the implication that those who sign petitions supporting projects don’t really support them. That they’re being fooled by people hired by developers to bribe people into signing petitions they don’t fully understand. That when exposed to the issues in a referendum, they would change their minds and vote against.

That’s not a far-fetched idea or a conspiracy theory. It’s a legitimate concern. And the process should probably be changed, both to ensure that people have better access to registers and to ensure that those signing petitions in support of a project understand the implications of doing so.

But don’t call direct democracy a “loophole” just because you disagree with a decision that you think is uninformed.