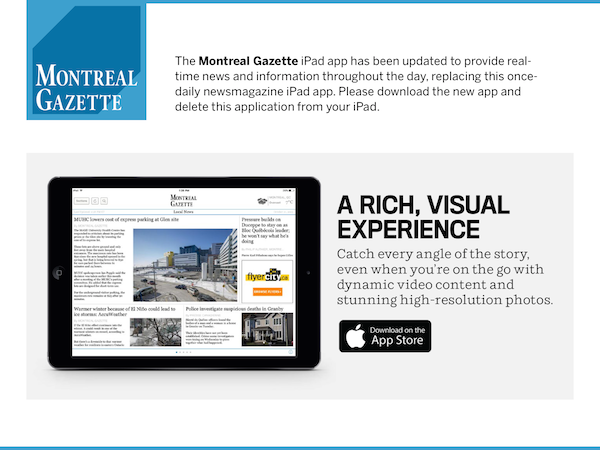 A final one-page edition of the Montreal Gazette iPad app asks people to download the old app instead.

As traditional media, and newspapers in particular, attempt to deal with the rapidly changing technological universe by overhauling their business models, many experiments are being tried out. Some are successful, some are spectacular failures, and most fall somewhere in between.

It’s normal in a period of experimentation chaos that some of those experiments fail. And it’s with that mindset that Postmedia announced this week it is pulling the plug on new tablet applications it launched with the Ottawa Citizen, Montreal Gazette and Calgary Herald, instead reverting to an old application that provides a standardized template for every story, which it simply pulls automatically from the website.

The apps offered evening editions of content from each newspaper, including some national and international news that was done centrally for all three. The original plan was for every Postmedia local paper to get a similar app when it was “reimagined”.

Like the apps from La Presse and the Toronto Star, the “2.0” Postmedia apps involved a lot of work. A professional designer created each page (and most stories were told over multiple pages), which mixed photos, video, animations, graphics and all sorts of other multimedia and interactive elements to create a rich, visually appealing environment.

At its peak, the Gazette iPad app had seven people working on it exclusively full-time, including all of its designers. It was a significant investment (though nowhere near what La Presse or the Star are doing) at a time when otherwise the company was cutting back hard.

In the end, the audience — and advertising revenue — the app generated wasn’t sufficient to keep it going. When it came to Edmonton’s turn to reimagine itself on four platforms, the plan for a new tablet app was ditched. Instead, it would continue to use an older app that was fed stories automatically from the website without the need for human intervention.

The change in the tablet app was reflected in a change in strategy on another platform as well. A smartphone app in which each story was specifically written (or, more accurately, edited) for that platform also changed direction. The Edmonton Journal’s new app is a hybrid, offering some custom smartphone-friendly stories and others that are fed automatically from the website. The other newspapers’ apps will follow its lead, unless there’s another change in strategy before then.

Both tablets and smartphones can also still use the newspapers’ websites, which are responsive and readable on those platforms. The fact that so many of them choose that option is another reason for the change.

Postmedia, like Torstar, Gesca and others, is experimenting. In the big picture, it’s a good thing. But when something of such quality fails, and especially when it’s not clear why (though everyone has their theories), it’s no less sad and frustrating. 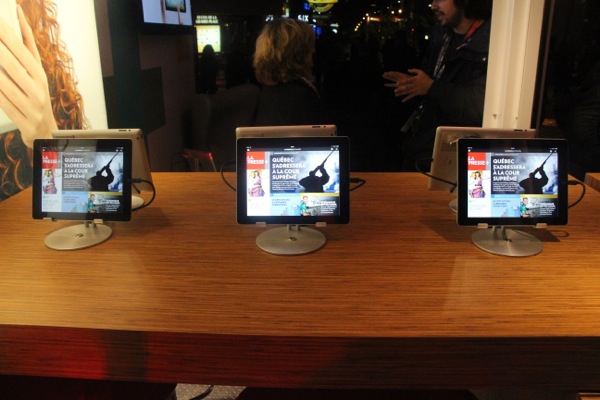 La Presse has made a $40-million bet on a new tablet platform that it hopes will replace its newspaper.

The newspaper industry is dying. The data is conclusive. As baby boomers die off, so will the business model of the daily newspaper, and there’s no way to stop it.

As someone who works for a daily newspaper, it’s tough to hear this. People in this industry want to pretend that there’s some magic solution waiting, but everyone has that fear that maybe the death spiral will continue until the business model collapses in on itself and there’s nothing left but some novelty papers kept for the sake of posterity.

But what really got me wasn’t what I was hearing, but who I was hearing it from: Guy Crevier, the publisher of La Presse, one of Canada’s largest and most prestigious newspapers.

And he wasn’t just repeating some attention-grabbing phrases he heard at the latest industry conference. Crevier’s conclusions are based on numbers and analysis that his company has spent millions to produce.