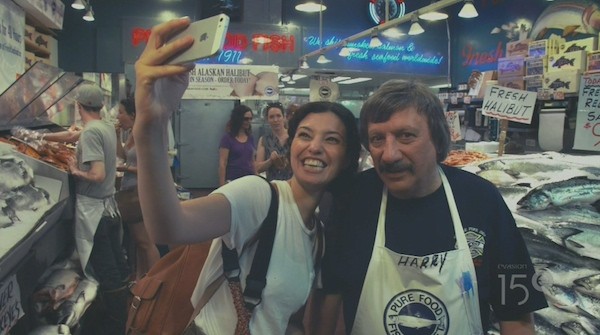 A year and a half after taking a social-media-fuelled trip through the U.K., Tamy Emma Pepin is back with another similar travel show for Évasion: #TamyUSA, which starts this week with a show from Seattle.

#TamyUSA follows Pepin through a road trip along the U.S. west coast, exploring the sights of its cities by meeting with people in them who are active on Instagram.

Unlike Tamy @ Royaume-Uni, in which Pepin would go to bed not knowing what she was doing the next day, this time her activities are much more planned. It’s much less chaotic and stressful this way, Pepin tells me.

There are also changes behind the scenes. It’s a different production company, for one. Toxa has been replaced by the tiny Parce Que Films, which has more experience in music videos than television series.

And the series is being put together in a hurry. Pepin returned from the U.S. trip only last month, and with only 40 days between the end of filming and the airing of the first episode, she has spent long nights in the editing room since then.

But the feel of the show is the same as before. From the low-contrast colouring to the creative music selection (thanks to Third Side Music), and particularly the stunning visuals from director of photography Émilie Ricard-Harvey, it’s very familiar to those who followed the U.K. adventure.

And, of course, Tamy is Tamy, a very charismatic host who can be bubbly without being fake, fun-loving without being irresponsible. It’s fun to explore the world with her because her genuine enthusiasm for discovery shines through the camera.

Plus, since Tamy is travelling through another English-speaking country, the show is effectively bilingual, with most interviews happening in English and subtitled in French.

The series isn’t available online, and no one finds that more frustrating than Pepin, who said she’s trying to change that. But Évasion, owned by independent Groupe Serdy, needs shows like this to drive subscriptions to the channel, particularly with rule changes that are pushing people toward pick-and-pay cable packages.

According to the latest data from the CRTC, Évasion gets 78% of its revenue from subscriptions, and a profit margin below 10% with its subscriber base stable at about 2 million subscribers.

Nevertheless, #TamyUSA has a very active website, and after each show premieres on Monday night there’s a free webcast chatting with local Instagrammers in her living room. That’s much less visually interesting than the show, though.

#TamyUSA airs Mondays at 8pm, and rebroadcasts Tuesday 10am, Wednesday 1pm, Friday 3am, Saturday 9am and 8pm and Sunday 4pm on Évasion.