It’s not just the Quebec government that pushed through some labour deals just before Christmas. This week both CTV and Global filled their vacant Quebec City bureau chief positions. 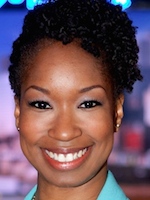 CTV’s choice is Maya Johnson, who has been at CTV Montreal for a decade now, and was working on Quebec politics while the position was vacant following Max Harrold’s move back to Montreal (he’s now an assignment editor at CTV Montreal). The choice was, frankly, obvious and you wonder what took them so long.

As a result of the Bell Media cuts, Johnson’s Montreal reporter job won’t be filled.

Hopefully this will give CTV’s Quebec City bureau the kind of stability it hasn’t seen since John Grant held the position. 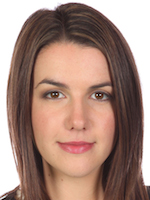 Global News, meanwhile, went with Raquel Fletcher, who was the anchor of Focus Saskatchewan at Global TV in Regina. Before that she was at CTV Regina. Fletcher was born and raised in the rectangular province, which means she’ll have a steep learning curve in Quebec City. But she won’t be the first child of Saskatchewan who’s now reporting on Quebec.

Fletcher’s career path is similar to that of Global Montreal morning host Camille Ross, who worked at CTV in Yorkton and Global in Regina.

Fletcher succeeds Caroline Plante, who was hired by the Montreal Gazette this summer.

The National Assembly is recessed for the holidays and resumes on Feb. 9. That gives these reporters a bit of time to get settled in their new positions. 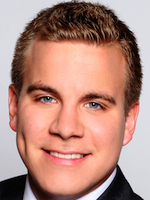 Not to be outdone, there’s staffing news at CBC as well. Thomas Daigle, originally from Quispamsis, N.B., but based for several years now in Montreal, will be the new CBC News correspondent in London.

Daigle, 28, worked at CJAD, Global Montreal and Radio-Canada Acadie before joining CBC Montreal. He was named the anchor for weekend newscasts when CBC Montreal added them back to its schedule, then he was moved to the National Assembly and eventually into the position of national reporter in Montreal. 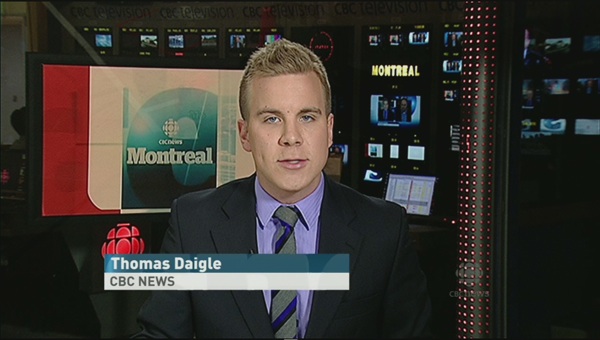 Thomas Daigle anchors his first newscast on Saturday, May 5

Whether it was despite some important breaking news or because of it, CBC Montreal’s first weekend newscast in eons went smoothly, leading with news that a tentative deal had been reached between the government and striking students. (Remember those days, how optimistic we were that this would all be over soon?)

Anchor Thomas Daigle and weather presenter Sabrina Marandola clearly showed the effects of rehearsals, and Daigle in particular was quite good for someone who comes into this with no anchoring experience.

Daigle credited weekday anchor Debra Arbec with helping him. “She gave me some good tips to improve my delivery and it has helped a lot. Debra has been a great coach,” he said during our interview the week before he started. 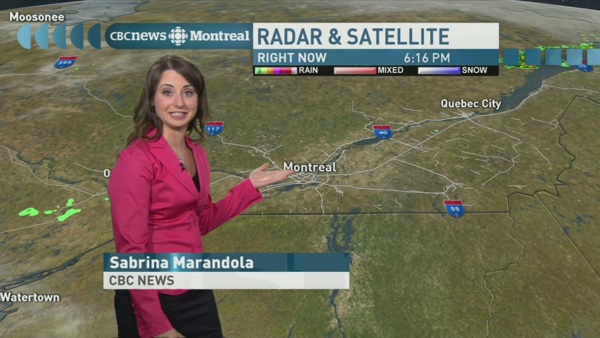 In addition to Daigle, Marandola and the technical staff, the new weekend news means more weekend reporters. So far the plan, according to news director Mary-Jo Barr, is this:

In addition, there’s an expectation that radio reporters will file to TV and TV reporters to radio wherever possible, and extra staff during major events where warranted.

The local online desk also gets weekend staff for the first time in a decade. No more waiting until Monday to post local news stories.

The staffing is similar to what you’ll find on the weekends at CFCF, where there’s a one-hour evening newscast and 35-minute late newscast each day. 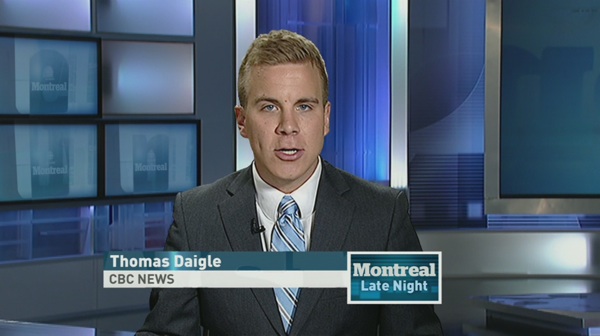 Daigle does the late Sunday newscast from the newsroom set

It was a bit surprising to me that the station isn’t making use of its brand new set on either weekend newscast. The Saturday one was done from the newsroom studio, with the control room in the background. The Sunday one was done from exactly the same place, but with the green screen lowered behind and the same virtual set as the weeknight late newscasts.

While CFCF is doing all its newscasts from the same set, CBC is basically using three.

You can read more on CBC’s weekend newscasts and its two new personalities in this story I wrote for The Gazette.

The first weekend newscasts are online if you want to see them again: Saturday, Sunday.

CBC Montreal’s weekend newscasts air at 6pm on Saturdays and 10:55pm on Sundays, unless pre-empted or postponed because of NHL games.

I should also mention that the addition to weekend news also applies to radio. Instead of pulling the plugs on local radio newscasts at noon, they continue until 4pm, and this since April 21. Katherine Canty, who assigns stories in the mornings, reads them in the afternoons, taking over from Loreen Pindera, who does 6:30am to noon. 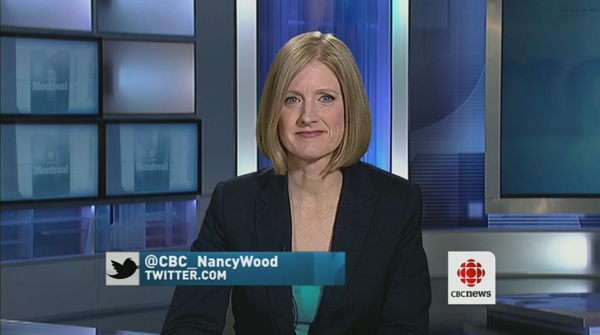 Nancy Wood is coming back.

Two years after being removed from her job as host of Daybreak on CBC Radio, Wood has been given the job of late anchor on CBC television. She will replace Amanda Margison, who is leaving Montreal to move to London, Ont.

. UPDATE: Wood’s first shift was Monday, April 23. You can see video of it here.

Wood has spent the past two years working in a special capacity at Radio-Canada’s investigative show Enquête, doing stories for them but also repurposing Enquête’s stories for English television (you know, all those “CBC/Radio-Canada investigations”). Wood told me yesterday that it was clear when the project was renewed for a second season last year that this would be its last, so she’s been preparing to return to the English side for some time.

With the opening of the late anchor position, Wood said it was a convenient way of bringing her back without causing any disruption to other positions or bumping anyone out of a job.

CBC’s union rules allow Wood to return to her old job of national television reporter based in Montreal if the anchor job doesn’t work out. It’s what kept her at the CBC after losing the Daybreak job and what she had planned to do before news of the late anchor vacancy came up.

I asked Wood whether being on a 10-minute late newscast was better for her professionally than being a regular reporter for national news. She pointed out the advantage of being a daily presence on local television versus a letter and more intermittent one nationally. She also said being a national reporter can often mean being told on a moment’s notice to run off to some distant corner of the province to report on a breaking story. Being an anchor is more predictable in terms of work hours and location.

But there are downsides to the new job, she admitted. With a shift ending at 11:15pm, it means not being able to spend weeknights at home with her two teenage kids, and only seeing them in the mornings, when they are much less verbal, as any parent can attest.

Wood said she’d also be a bit sad about not being able to work on long features like the stories she’s doing for Enquête. She just came back to Montreal from Louisiana, where she worked on her final story, expected to come out next week. After that, she’ll move to the English side. (UPDATE: Her final investigative story has come out, about the health risks of an anti-malaria drug given to Canadian soldiers)

It was actually Wood who used the R word first in our conversation, pointing out that part of her job will be to try to boost the ratings of the late newscast, sandwiched between The National and George Stroumboulopoulos Tonight.

Wood’s departure from Daybreak reportedly had a lot to do with the show’s ratings with her at the helm.

When asked whether she’s worried about ratings, Wood said it would be nice to see a boost, but that will depend more on how much promotion of the show will be done using the usual means as well as during advertising breaks of The National.

I’m sure it’s a coincidence, but I can’t help noticing how the timing of Wood’s job change matches that of CBC Quebec boss Pia Marquard. Though it’s unclear what role Marquard played in removing Wood from Daybreak, the move happened as she took over the job, and many CBC listeners angry over Wood’s removal blamed Marquard directly. Wood’s move back to a more public role happens just as Marquard is leaving the post for health reasons.

UPDATE (April 18): CBC Montreal News Director Mary-Jo Barr had nothing but praise for Wood. She also noted when I talked to her that Marquard was instrumental in Wood being given the late anchor job.

As for Margison, she confirmed she’s “moving on” but didn’t offer much comment on the matter, beyond her surprise that the news came out via Twitter.

“There are no secrets any more,” she writes in an email.

Not when it comes to anchors, I’m afraid.

Meanwhile, the second of two jobs opened as a result of the impending expansion into weekends have been filled. Sabrina Marandola will be taking over the job of weekend weather presenter.

The move is hardly a surprise. Marandola has often acted as a backup to Frank Cavallaro.

Marandola joins Thomas Daigle, who was named to the anchor position last week.

UPDATE (April 18): Barr heaped the praise on both Daigle and Marandola, saying how thrilled CBC is to have them in these roles. Barr said Daigle, who has no previous anchoring experience, is nevertheless “a really strong live reporter” who is “engaging on camera, a great communicator”. Marandola, who started backing up Cavallaro around Christmas, is “dynamic and engaging” and “really has a love and passion for weather,” Barr said.

I asked Barr, because of Wood’s history, whether ratings would factor in to how these anchors are evaluated. Barr said that of course ratings are important (“that’s why we’re here,” she said), but that there are no expectations on anchors when it comes to ratings numbers.