It will come as no surprise to you that Quebecor and Canada’s public broadcaster are not the best of friends. Quebecor’s controlling shareholder and CEO, Pierre Karl Péladeau, has complained about it many times in the past. (He also complains about La Presse, Bell, the Quebec Liberal Party, the Quebec government and others.)

This week, Quebec’s largest telecom and media company filed a complaint with the CRTC demanding that it order CBC/Radio-Canada to shut down its Tou.tv Extra streaming service. Not all of Tou.tv, just the $7/month premium version that charges for premium content.

I examine the application in this article for Cartt.ca subscribers. In short, Quebecor is arguing that:

Quebecor lays it on pretty thick in the application, saying CBC/Radio-Canada is “short-circuiting the Canadian broadcasting system with taxpayer money” and “creating two-tier public television: enriched content, exclusives and offers first to the better off, and regular content and reruns to the masses.”

I could point out some of the obvious counter-arguments to Quebecor’s argument (Tou.tv Extra does not offer live streaming of cable channels, only some of their content on demand; there is no condition of licence requiring it to be free; it’s basically the same model as Quebecor’s own Club Illico; the deal offered to Telus was offered to others as well including Videotron, who choose not to take it; even if there is undue preference, it does not mean Tou.tv Extra needs to cease its operations), but what struck me today as I was doing some Google searching is a post I wrote 10 years ago just after Tou.tv first launched, when Péladeau complained about it then. Here’s a paragraph I excerpted from an open letter he wrote:

Furthermore, the CBC has launched the Tou.tv website without consulting the industry, a move that jeopardizes Canada’s broadcasting system by providing free, heavily subsidized television content on the Internet without concern for the revenue losses that may result, not only for the CBC but also for other stakeholders, including writers and directors.

So, in 2010 Péladeau argued that Tou.tv threatened the broadcasting system by not charging a fee.

And in 2020 Péladeau argues that Tou.tv Extra threatens the broadcasting system by charging a fee.

You have to give this to Péladeau: He’s got quite the ability to argue. It must be fun working in his regulatory affairs department.

Pierre-Karl Péladeau, the big cheese behind Quebecor, caused a bit of a stink this week when he wrote an op-ed (published in French in Le Devoir and in English in the Financial Post) attacking the CBC over the fee-for-carriage debate, even though the CRTC has already decided that the CBC shouldn’t be able to charge cable and satellite providers for permission to rebroadcast its signals.

It’s not that he doesn’t think there should be a public broadcaster. He just doesn’t want there to be one that competes with the private networks, offering popular programming and in particular taking U.S. programs and re-airing them for profit. The Radio-Canada envisioned by Péladeau is more like CPAC, contributing to the public dialogue but not with anything that people actually want to watch. Certainly nothing anyone would want to pay to advertise on.

In a way, I can see where he’s coming from. Imagine if you ran a business, and next door there’s a competing business that gets heavily subsidized by the government. I’m sure the CBC bosses and supporters have a ready-made retort to attack that comparison (CBC boss Hubert Lacroix touched on some of them in the National Post), but even if it’s not perfect, it still makes a strong point.

If only someone who’s not Pierre-Karl Péladeau (or from some government-hating conservative think-tank) would make it, it might carry more weight.

This week, though, Péladeau added another aspect to his anti-CBC rant:

Furthermore, the CBC has launched the Tou.tv website without consulting the industry, a move that jeopardizes Canada’s broadcasting system by providing free, heavily subsidized television content on the Internet without concern for the revenue losses that may result, not only for the CBC but also for other stakeholders, including writers and directors.

By “without consulting the industry”, he means, well, him. Tou.tv has programming from Télé-Québec, TV5, TFO and others. V and RDS aren’t included, but they have their own websites that provide video on demand.

TVA, meanwhile, doesn’t offer shows on demand online, even those shows that you’d think would get a pretty high audience there. Instead, it offers them on Videotron’s Illico on demand (Videotron, by wacky coincidence, is also owned by Quebecor).

Péladeau argues about “heavily subsidized television content”, which is hardly new to Tou.tv. Somehow, I suspect he might be a bit more angry at the fact that Tou.tv has become popular, and might even become a Québécois Hulu, leaving TVA in the dark. 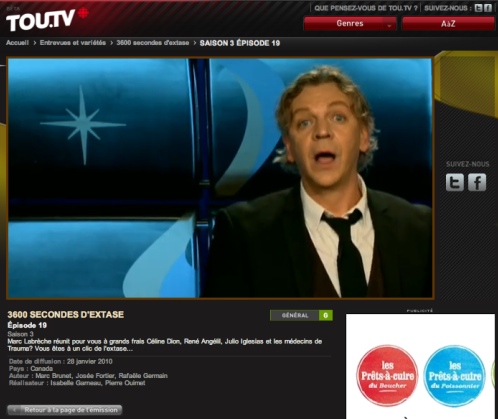 3600 secondes d'extase is all over Tou.tv. Marc Labrèche will show his face anywhere.

In case you hadn’t noticed from coverage by La Presse, Canoe, Rue Frontenac, Branchez-Vous, MSN, Radio-Canada and, like, every other news media in Quebec, Radio-Canada last week launched tou.tv, a video portal with content from Radio-Canada but also some other television networks like Télé-Québec, TV5, ARTV, TFO and others, including some European francophone channels. (The inevitable comparisons to Hulu followed quickly, even though Canadians can’t use Hulu and therefore don’t have much basis for comparison).

Notably absent from that list are V, the former TQS network that already puts all its content online on its own website, and anything owned by Quebecor, including TVA. Quebecor’s strategy is to leverage its video content to improve the bottom line for its Videotron cable service. So the only way to get TVA shows on demand is to use Videotron’s Illico video-on-demand service (which has most TVA content for free).

Still, even if it was just Radio-Canada stuff, it would be pretty cool. I’d finally get a chance to see two of my favourite shows – Tout le monde en parle and Infoman – on demand (I usually miss the initial airings of both).

Oh but wait, neither show is part of Tou.tv’s vast repertoire.

How can that be? They’re both Radio-Canada series. And because they’re both about the news, you’d think they’d have a short shelf life. Wouldn’t you want them to get maximum exposure in a short period of time? Are people going to buy DVDs of these shows in three years? (Well, maybe…)

Despite being on Facebook and Twitter, Tou.tv hasn’t been communicating very well with users. Its first response on Twitter came a week after it launched, in which it reassured me (don’t I feel special) that it’s just getting started. I can understand that, though there’s still a lot of viewer inquiries and stuff that’s not being responded to, making it seem like it’s being ignored.

There’s also technical problems, like videos freezing halfway through, or (as I experienced) not being able to resume after a long pause. But I can understand that too, assuming they eventually fix it.

So what’s up with TLMEP and Infoman? I sought out to inquire. I sent messages to Radio-Canada (for both shows), and to the production houses behind those shows: Avanti Ciné Video and Les productions Jacques K Primeau (TLMEP) and Zone 3 (Infoman). The only response I got was from Radio-Canada’s Marie Tetreault, who said that they couldn’t include these programs because of rights issues. (One of those annoying problems that even forced them to temporarily pull their own launch video).

So those hoping that these shows would soon be added to Tou.tv, don’t hold your breath. They’ll have the entire series of Et Dieu créa … Laflaque!, Virginie, Tout sur moi, and the RBO Bye-Byes, but two of its biggest shows won’t be added because Radio-Canada doesn’t want to go through whatever trouble is necessary to secure the appropriate rights.

I could understand if this was a 20-year-old TV show, conceived long before the Internet existed, and which has some rights holders who can’t be reached or something, but surely RadCan can come to some arrangement with its own shows to clear online on-demand rights for new episodes.