In 2014, Montreal-based fans of U.S. public radio got very concerned when they heard of an application from Concordia University’s student radio station CJLO for an FM retransmitter downtown on the same frequency as Vermont Public Radio.

WVPS 107.9, with a 48.8kW transmitter on top of Mount Mansfield, is the easiest way for Montrealers to listen to VPR (and the many NPR programs it carries). But since it’s an American station, its signal isn’t protected here, so a Canadian station could operate on the same frequency provided it doesn’t interfere with the U.S. station’s signal south of the border.

The CRTC denied CJLO’s application solely based on its own merits, finding there was not a compelling technical need for a new transmitter. Since then, VPR’s signal has continued unimpeded.

But with 107.9 being the last available frequency in greater Montreal, it was only a matter of time before someone tried again.

In December, the CRTC published a call for comments on the possibility of adding a new radio station in Joliette, about 50 kilometres north of Montreal.

Consistent with policy, the call comes after an application was filed seeking to create a new station. The application is by Arsenal Media, which announced in July it was seeking to build a new country music station in Joliette as a sister station to CJLM-FM (O103.5). The station would operate under Arsenal’s Hit Country brand, Quebec’s only multi-station francophone country music radio brand.

According to the CRTC’s call for comments, the station would operate at 107.9 MHz, with a maximum effective radiated power of 25,000 watts. While we don’t have details on how that signal is directed, it most likely would be strong enough to either cause interference to WVPS or wipe it out completely for people in greater Montreal, particularly the eastern parts. CJLM-FM can already be heard in eastern Montreal and the new country station would have a higher power output.

There are a few steps that would need to be taken before this happens, though. First, the CRTC will need to determine that the Joliette radio market can support a new commercial radio station. Comments from Arsenal, competing radio companies and the public will be taken into consideration by the CRTC in determining its decision.

If the CRTC agrees the market could accept another station, then, if other broadcasters express interest in setting up a radio station in Joliette, the commission will begin a competitive process to decide which one to grant a license to. (Other applicants can choose other frequencies if they want, but not many are technically feasible.)

If no other broadcasters express interest, then the CRTC would proceed with Arsenal’s application and judge it on its own merits.

The CRTC is accepting public comments on “the appropriateness of issuing a call for radio applications to serve Joliette” until Jan. 31. They can be filed online here.

Note that all information submitted becomes part of the public record. And this is a call for comments about whether to add a radio station in Joliette. Comments about how much you love NPR will fall on deaf ears because it’s not the CRTC’s job to protect American signals in Canada.

Since the announcement last month that Concordia’s CJLO radio station has applied for an FM retransmitter downtown to allow listeners at the downtown campus to hear it, but would block out Vermont Public Radio for many more, there’s been a lot of questions, debate and differences of opinion about this proposal.

The CRTC has already received 645 interventions, almost all of whom are radio listeners who support one side or the other. The majority are VPR listeners responding to the organization’s public call-out on its website. Others are CJLO fans who want to be able to hear the station on the downtown campus and say this is the only practical way to do so.

In most (but not all) cases, the interveners don’t have bad things to say about the other side. The VPR fans hope for an alternative solution to the reception problem. Both CJLO and VPR say they support the other and don’t want to prevent anyone from being able to listen to the other.

I look a bit deeper into this application in this story for The Gazette, which appears in Friday’s paper. Below, I’ll tackle some of the questions and perceptions that people have and try to come up with some unbiased answers to them. 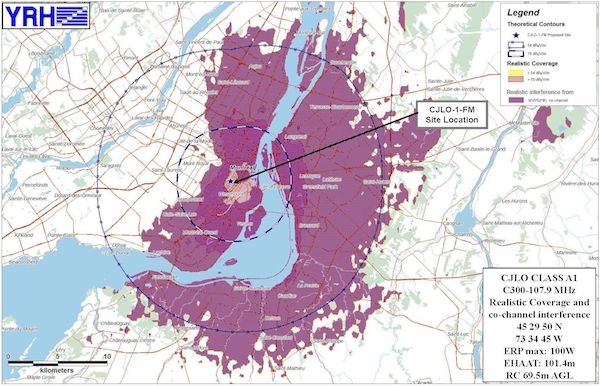 A map of potential interference between VPR and CJLO on 107.9 FM, based on terrain data, created by Yves R. Hamel and Associates (click for larger)

END_OF_DOCUMENT_TOKEN_TO_BE_REPLACED 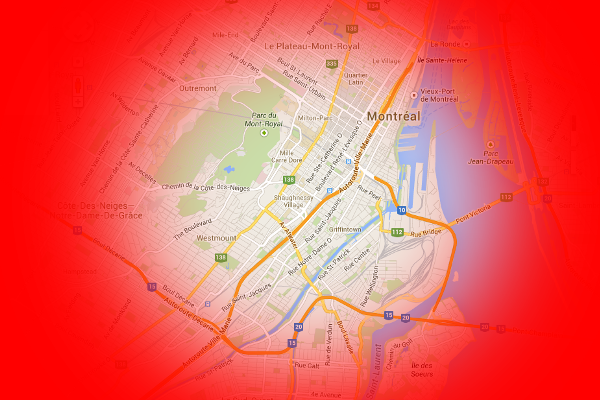 A rough guide to the range of the proposed CJLO FM transmitter. Red areas would experience interference from WVPS in Vermont.

After much study, Concordia student radio station CJLO 1690 AM believes it has found a solution to reception problems it is experiencing at the university’s downtown campus. A long-rumoured application for a low-power FM retransmitter was published Friday by the CRTC.

If approved, the transmitter would operate on 107.9 FM, from an antenna on the Henry F. Hall Building, at 100 watts.

The frequency is one that has been previously identified as potentially usable in Montreal, but it comes with one big downside: It’s the same frequency as WVPS, the Vermont Public Radio transmitter in Burlington, and the only U.S. public radio station that reaches into Montreal.

Because of co-channel interference from the 48kW VPR transmitter, the CJLO FM retransmitter would have a very limited range, basically covering the core of downtown and not much else. On the other hand, areas around downtown will experience a great deal of interference, likely hearing both stations at the same time, and neither very well. (I can’t get too specific about this because the maps submitted with the application are blurry and black-and-white because they were sent by fax).

Though VPR’s 107.9FM signal reaches Montreal remarkably well, it is not protected in this city. We learned this two years ago when a proposed station in Hudson offered 107.9 FM as an alternate frequency if its first choice of 106.7 was rejected. The CRTC received some comments from VPR listeners upset at the potential of no longer being able to hear that station. 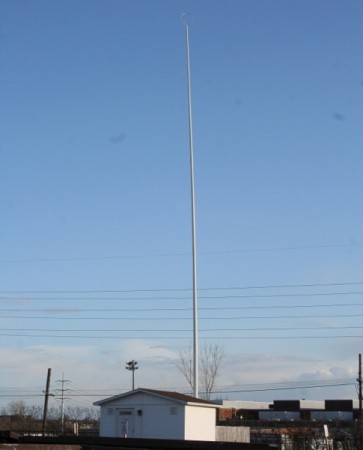 CJLO’s AM antenna on Norman St. Increasing its power, or putting a transmitter like this downtown, are impractical solutions to downtown reception problems.

CJLO’s report, prepared by broadcasting consultant Michel Mathieu, notes that signal strength readings were taken along Sherbrooke St. and de Maisonneuve Blvd. downtown, and they showed that the signal is particularly bad in the heart of downtown where Concordia’s downtown campus is. The signal starts dropping around Atwater St., and returns around Berri. The reason? Downtown skyscrapers absorbing the AM signal.

Even Laval, more than twice the distance away, shows a signal 10 times better than in some downtown blocks.

In case the quantitative data isn’t enough, the application also includes a dozen letters from CJLO listeners complaining of the signal quality downtown.

There’s clearly a problem here, and a low-power FM retransmitter makes the most sense as a way to solve it, even though the choice of frequency might not be to everyone’s liking. (Mathieu notes that even VPR’s signal is hard to receive downtown because of the same interference problems that CJLO experiences.)

CJLO’s application noted that it studied other options:

The report doesn’t mention looking at other FM frequencies, but with the FM band effectively at capacity in the city, it would be difficult to locate one to put even a low-power transmitter without causing interference

UPDATE (May 4): CKUT’s International Radio Report devoted its show on Sunday to this application, with comments from supporters of CJLO and VPR. You can listen to the show here in MP3 format.

Meanwhile, VPR is warning its listeners about the CRTC application and its consequences.