Over 100 people have “confirmed” on Facebook that they’re attending a pillow fight Saturday at 3pm at Parc Lafontaine. That usually means that a dozen or two people will actually show up.

UPDATE: About 35 people showed up. Here’s how it went.

Similarly, a zombie walk is planned for Saturday, Aug. 29 at the Papineau metro with similar numbers.

The “First Annual Zombie Walk“, which has been rescheduled at least twice by my count (I first talked about it in September), looks like it’s finally going to happen this Saturday, a few blocks away from the Santa Claus parade.

The zombies are to meet up outside the de Maisonneuve entrance to Dawson College (3040 de Maisonneuve Blvd. W., metro Atwater) at noon. From there, they’ll take an unannounced course and walk zombily around downtown. There are currently no plans to interfere directly with the parade, though there are bound to be some crowd overlaps.

The parade, meanwhile, takes the Standard Downtown Parade Route, starting at Fort and Ste. Catherine and going east until St. Urbain. The parade starts at 11 a.m. and is expected to run until about 2 p.m. 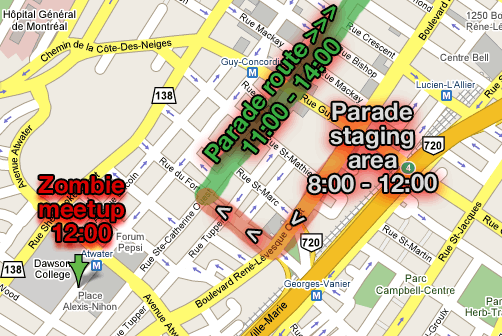 For an example of what a zombie walk looks like, you can check out this video of a similar walk in Trois-Rivières in September.

The zombie walk has a goal of promoting environmentalism, and has gotten form letters of support from the office of Al Gore and David Suzuki (though the latter wrote his brief letter by hand). It’s still unclear how zombies are going to help the environment.

At least one after party is already planned, though its location is being kept secret.

For more information on the Zombie walk, consult its Facebook page. (Or, if you have moral objections to Facebook, just ask me and I’ll see if I can find out.)

Yet Another Montreal “First Annual” on Facebook: the First Annual Zombie Walk. Scheduled for Saturday, October 27 at a place to be determined.

The organizer says the walk is meant to draw attention to global warming, which makes absolutely no sense. Nevertheless, it should be fun.