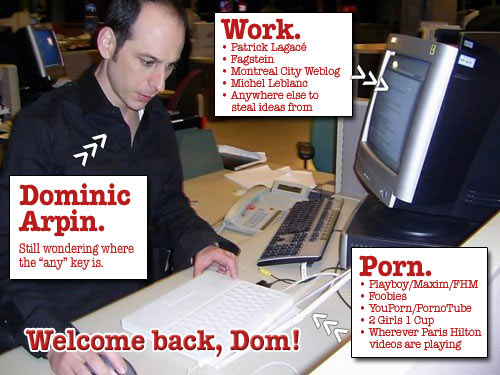 Dominic Arpin is setting up a new blog

Dominic Arpin is back! Over three months since he gave up blogging and two months since his show Vlog went off the air. His first post describes what he’s been up to since.

UPDATE: The best part about it: Not having to register with Canoe before I leave a comment.

UPDATE (Feb. 9): Bruno Guglielminetti has an interview (Windows Bleedia, sorry) with the Domster, in which he explains the blog is an independent venture designed to build a personal brand that would outlast his career at TVA (not that he’s planning on leaving anytime soon).

Arpin, meanwhile, is red-faced over all the attention he’s getting (he was a vedette at this week’s Yulblog), even from me, whom he calls his “plus fidèle tortionnaire.” I was going to complain that he used a complicated French word which Google translated as “torturer,” but looking back at that graphic I guess I did pick on him a bit. (Writing a newspaper article that called him a thief probably didn’t help either ;)