In October, you’ll recall Global TV announced a major overhaul of its local news outlets. As part of the plan, sets would be demolished, staff would be laid off and instead of a proper studio, local anchors would deliver the news in front of green screens to cameras controlled remotely out of Vancouver. Story packages would be shipped off electronically to a centralized news processing centre, and virtually all the production would be taken out of the hands of local workers. (The results, of course, left much to be desired)

At the time, Global reassured local viewers that their broadcasts would still be local:

News staff in each market will continue to generate local content. All content will be delivered to a Broadcast Centre and packaged into a program format for air. Local anchors will continue to deliver the news from their local stations.

Well, apparently that’s not quite the case anymore. Because being in front of a green screen means you can pretend to be almost anywhere, Global is exploiting this to make its news anchors pretend to be in places they’re not. 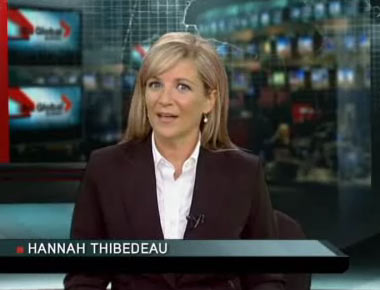 The three of you still tuning into Global Quebec’s evening local newscast might notice some unfamiliar faces on your screen. Hannah Boudreau Thibedeau is anchoring the 6pm newscast for what I’ll assume is a vacationing Jamie Orchard. Except Thibedeau isn’t part of the Global Quebec team, she’s Global’s Parliament Hill correspondent based out of Ottawa.

But that’s not conclusive proof. She could have driven into town to fill in, the local staff stretched too much as it is with summer vacations and all. 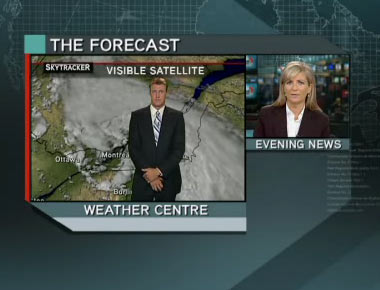 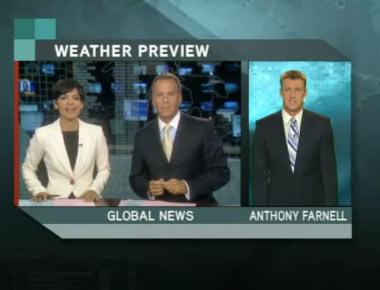 Unless he has a special helicopter to shuttle him back and forth between Montreal and Toronto, he’s clearly doing both weathercasts from the same location, in front of the same green screen.

That in itself isn’t too much of an issue. I mean, any idiot can do the weather.

The problem is that he’s being dishonest about it. In both newscasts he uses the word “we,” as in “we are going to see heavy rain over the next couple of days.” For the Quebec newscast, he cut to clips of Montreal traffic. And yet nowhere is it mentioned that he’s doing this newscast from a green screen in Toronto.

Lying about your location goes well beyond the usual fakery we see on TV news. It’s dishonest an unacceptable from an organization that is supposed to be trustworthy about bringing the truth to its audience.

It’s hard being the No. 3 newscast for a community of only a few hundred thousands anglophones. The fact that nobody watches the newscast does justify cost-cutting (though that only continues the hopeless ratings death spiral). But you have to be honest about it. Level with your viewers, explain the reasons behind your decisions and even if they don’t like it, they’ll at least understand.

Saving money by lying to people is just one step above fraud.