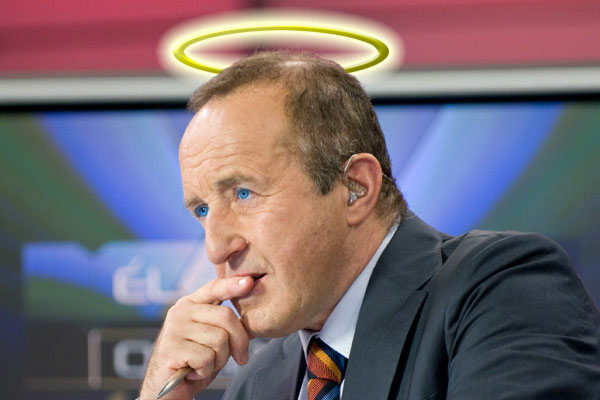 Luc Lavigne photo (with some improvements)

Back when Bill Haugland, a fixture of CFCF’s newscast for almost a half-century and the long-time anchor of Pulse News, retired from the anchor’s chair two years ago, CTV’s Montreal station made a big deal about his departure. There was even a half-hour special about it, which is saying quite a bit in an era where locally-produced English-language television is extremely rare.

One of the things that special included was some classy sendoffs from anchors of competing newscasts. Not only did Global’s Jamie Orchard (who worked at CTV before joining Global) and CBC’s Dennis Trudeau (for a long time his direct competitor) give heartfelt goodbyes, but there were messages from the anchors of TVA and Radio-Canada’s newscasts, the latter from Bernard Derome.

So when Derome, who has been in RadCan’s anchor chair since (insert lame joke here), retired himself last week (albeit for the second time), the anglos returned the favour. CTV’s newscast had an item on Derome’s departure, and The Gazette had a feature piece and an editorial on it (despite what some in the francophone media may think, my paper doesn’t completely ignore what goes on in the other solitude).

It wasn’t the kind of Deromania that’s been flooding RadCan and La Presse recently (note to self: retire in late December when there’s no other news going on so I get more ink), but there was an acknowledgment that one of Quebec’s biggest vedettes was ending a storied career.

As for TVA, RadCan’s biggest (and with the departure of TQS’s news division, only) news competitor … absolutely nothing, according to Le Soleil’s Richard Therrien. A big “fuck you” without saing a word.

It’s sad what the drive for competition can do to strip some people of any sense of class.