In February, CKX found out that owner CTVglobemedia was putting it up for sale. The station is actually a private CBC affiliate, running mainly CBC programming, but the CBC decided not to renew its affiliation agreement which sees the public broadcaster pay the station to air its programming. So CTV offered to sell the station to CBC for the nominal price of $1. CBC refused, because the cost of operating the station outweighs its potential for earnings or its usefulness. Without someone to take it over, the station would be shut down.

At CHWI and CKNX, both underperforming A-Channel stations in southern Ontario, it was the same deal. CTV would not renew their license, and the stations would be shut down when their current licenses expire in August.

Although I don’t doubt that these stations were losing money, there was also a political reason for pulling the plug. CTV was about to step in front of the CRTC and ask for a third time that it require cable and satellite distributors to pay conventional broadcasters to carry their over-the-air signals. The argument is that the advertising model for conventional TV is broken, mainly because of the proliferation of specialty cable channels who get advertising and subscriber fees, and don’t have to produce local programming.

Announcing that it would close these stations was a “See what you’re doing?” move intended to be an example for what could happen across the network if the CRTC refused.

Similarly, Canwest Global (my employer) said it was looking at “exploring strategic options” for its secondary E! network, which includes Montreal’s ethnic station CJNT. That’s managementese for “they’re up for sale,” though it wasn’t a firm commitment to sell or shut down.

The fact that these both involve secondary network stations, which tend to get second-rate U.S. programming, isn’t a coincidence.

Some communities have taken it upon themselves to save their stations. In southwestern Ontario, rallies are planned to convince CTV to change its mind. In Hamilton, a “Save CHCH” campaign that would put the E! station in community hands.

Cable and satellite providers, meanwhile, aren’t crazy about this fee-for-carriage idea. In a bid to get consumers on their side, they say they’d just pass the fees on to them instead of eating in to their record profits. They also argue that conventional television broadcasters are exaggerating their financial situation, which they argue will recover when the current recession ends.

So on Thursday, CTV’s Ivan Fecan was before the CRTC using these three stations as examples of how the conventional television model was broken, adding that it might reconsider closing CHWI-TV if additional money were to come through.

Shaw Communications (which owns a single television broadcasting station but more importantly a large cable company and the direct-to-home satellite network StarChoice) decided that it would try to shut CTV up by offering to buy the stations for $1 each.

As part of the move, Shaw bought a full-page ad in Friday’s Globe and Mail to make its case: 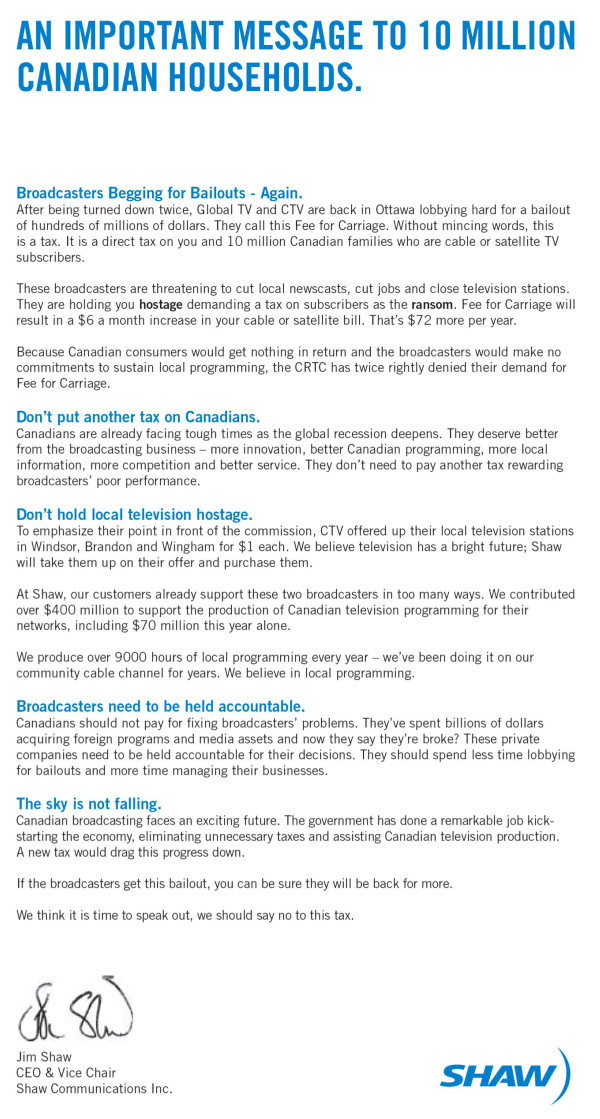 It certainly doesn’t mince words. Not only does it repeat the “hostage” and “ransom” metaphors, it bolds them.

Of course, the ad is misleading in two ways:

The Globe interviewed Shaw (who said its offer was genuine), and CTV got wind of the plan somehow (either because the Globe asked it for comment, because Shaw let CTV know of the offer or because CTVglobemedia owns the Globe and the advertisement was shown to head office). So it immediately agreed to the sale, took out a half-page response ad facing Shaw’s and hastily put this together: 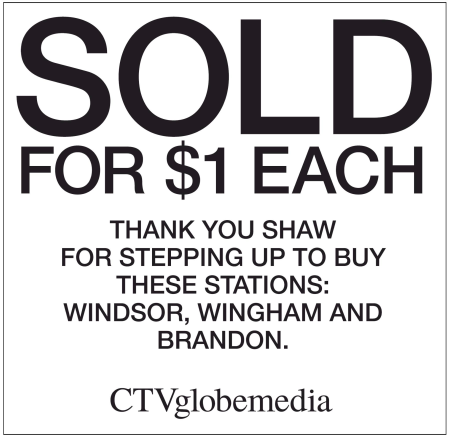 Well, OK. I guess that makes it official. Though both sides will have to sign contracts and get approval from the CRTC for the change in ownership.

In a press release issued at the same time, CTV CEO Ivan Fecan was similarly sarcastic:

“I think it’s great. We’ve accepted their offer of $1 per station. Cable is rolling in money and can obviously afford to underwrite the losses. Good for them. I’m sure they will live up to the existing conditions of licence placed on these stations which is wonderful news for the employees and for the people of Windsor, Wingham and Brandon.”

And that, ladies and gentlemen, is how three Canadian television stations were sold though sarcastic press releases and mean-spirited newspaper advertisements.

Shaw says the same offer is on the table for Canwest’s five E! stations, including CJNT. But Canwest says Shaw hasn’t talked to them directly.

So there is rejoicing in Windsor and Brandon (subscription link), though they’re not quite sure what to think of it all.

After all, Shaw could have stepped up two months ago, but it didn’t. Shaw has no interest in running TV stations. It just wants to embarrass CTV and Global and convince the CRTC not to approve fee-for-carriage.

Canadian Press analyzes the move, which it says could be a win-win if Shaw succeeds at creating a lean operation that draws a modest profit. The Globe and Mail’s Derek DeCloet also suggests that this move is a transparently ungenuine one solely designed to ward off more expensive carriage fees.

Anything is better than a shutdown, and an acquisition by Shaw is a mild decentralization of broadcast television. So even though there will be inevitable layoffs, there is hope for these communities.

I just wish these stations, and the dozens of jobs they represent, weren’t tossed around angrily like worthless pawns in a high-stakes game of media chess.

UPDATE: The Globe reports that neither CTV nor Canwest have received so much as a phone call from Shaw.

UPDATE (June 30): Two months later, CTV announces that Shaw will not, in fact, buy their stations. So it was all a giant bluff after all.

4 thoughts on “Worthless stations sold sarcastically for $1 (UPDATE: NOT!)”