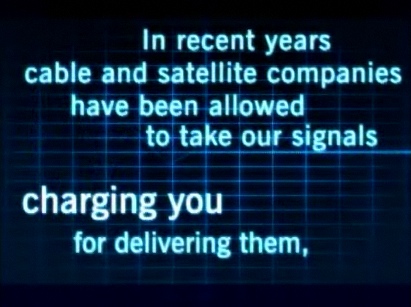 If you haven’t caught CTV’s “Save Local Television” ads recently, you haven’t been watching television. CTV has blanketed its stations, the A television network as well as specialty channels like the Comedy Network and Space with these advertisements that predict a doomsday scenario for local television and demonize the cable and satellite companies for “taking our programming” and “giving nothing in return” (as if this arrangement benefits solely the cable companies at the expense of local broadcasters, and as if the cable companies are selling DVDs of Corner Gas).

The cable and satellite companies have responded with a giant STFU, and issued a press release saying they’re complaining to the CRTC that CTV is breaching the public trust with this one-sided campaign that is a “blatant violation of journalistic principles.” (More coverage from CTV-owned Globe and Mail, Canwest/Global-owned Financial Post, CBC-owned CBC.ca and non-profit cooperative Canadian Press)

You see, not only is CTV running these ads all over the place, it’s enlisting the help of its journalists to spread its message. Ridiculously one-sided news reports from CTV Atlantic, CTV Winnipeg, CTV Toronto and A Barrie simply throw journalism out the window. In all but the one case, no attempt whatsoever is made to get comment from cable and satellite companies. The exception, in the CTV Atlantic report, includes a 10-second clip in a two-and-a-half-minute report whose bias is evident when the reporter talks about broadcasters wanting “equal treatment”.

CP24 (which is owned by CTV) has a fluff interview with CTV Executive Vice-President of Corporate Affairs Paul Sparkes in which he crosses the line from misleading to outright lie, saying cable and satellite companies are “taking our programs, repackaging them, selling them to the consumer, making a profit, and paying us nothing.” Local television feeds are not “repackaged”, but passed through directly to consumers. Sparkes also dismisses an actual question about fee for carriage lobbed at him from his reporter.

This report from Graham Richardson is a bit more balanced, in that he actually talked to a Rogers VP without systematically picking apart everything he says. It is the exception, unfortunately.

CTV Montreal enlisted the help of the premier, although Jean Charest doesn’t specifically state that he supports a mandatory fee for carriage. (He also talks of how important local television is to his home town of Sherbrooke, even though it has no local anglo television station.)

In response to the complaint, CTV issued a press release blasting Rogers as “underhanded” (at the same time arguing that discussions shouldn’t happen via press release).

Its only comment about the attacks on its journalistic integrity came from this paragraph:

Indeed, consistent with CTV’s efforts to provide balanced coverage of the issues surrounding the crisis in local television, CTV once again invites representatives from Rogers, Bell, TELUS, Cogeco, Eastlink and the CCSA to participate in tomorrow’s nationwide events.

I can only assume this means CTV reporters will only talk to cable and satellite companies about this issue if they send a representative to CTV’s political rallies on a Saturday to be heckled by a public that has only been told one side of an issue. That doesn’t sound particularly “balanced” to me.

Despite this, Shaw once again called CTV’s bluff, and Ken Stein, the senior vice president of corporate and regulatory affairs at Shaw Cable, agreed to an interview with CTV NewsNet’s Jacqueline Milczarek. Milczarek argued with him (politely) for more than six minutes, a huge contrast from the softball questions given to CTV executives.

Stein also appeared opposite CTV’s David Goldstein to debate the issue on an Alberta program, which went on for a respectable 14 minutes. Sadly, the debaters weren’t as respectable, accusing the other of misleading people. In short, Shaw says it produces local programming through cable access channels, while CTV argues (correctly) that those channels are financed entirely out of a CRTC-mandated fund. CTV argues that Shaw et al are stealing their programming and pirating it to viewers, and incredulously accuses Shaw of using “scare tactics” in this campaign (you know, the one in which CTV is using a heart monitor metaphor to say local TV will “disappear forever” if fee for carriage isn’t enacted).

The network also finally got some smart analysts on. Eamon Hoey looked at the larger picture, taking a dim view of fee for carriage, and got hounded by Milczarek. Carleton University’s Christopher Waddell also pointed out how CTV isn’t telling all sides of this story, and also got treated with skepticism.

Don’t get me wrong, these interviews with Milczarek are what journalists are supposed to be doing: getting people to answer tough questions. But compared to the fluff interviews about open houses with CTV executives, it seems clear that CTV is using its journalists to advocate for a cause, being soft on their bosses and tough on their competition.

CTV is grossly abusing its public trust by forcing its journalists to participate in what is essentially a political campaign. Television viewers have the right to be fully informed about all sides to this issue and CTV is systematically denying them that right.

Of course, the fact that local CTV stations are owned by a giant conglomerate that puts profit above everything else and is pretending to care about local television to manipulate the public is the problem in the first place, isn’t it?

What’s even sadder is that it takes another group of giant corporate conglomerates protecting their own bottom lines to bring this problem to light. If a solution was proposed that benefitted both private broadcasters and cable and satellite companies at the expense of television viewers, who would be there to look out for us?

I’m going to CTV Montreal’s open house today. I’m pessimistic about their chances of convincing me to accept their corporate manifesto, but it’s a good chance to explore the station.