CTV has gone on the offensive in its campaign to “save local television” by forcing cable companies through legislation to give them money. Ads have already started appearing on TV, and a website and online petition has been setup to get people to tell their MPs to approve a “fee for carriage” scheme that would give CTV, Global, Rogers and other conventional television broadcasters hundreds of millions of dollars, with very vague ideas of where that money would actually go.

I’m still kind of on the fence about fee for carriage or related schemes. On one hand, I agree that it’s unfair for cable broadcasters to be able to charge subscription fees and get advertising revenues while spending little money on original programming (and no expensive local programming whatsoever). I also think cable and satellite distributors like Videotron and Bell have profit margins that are way too high and more of that money should be going either to the broadcasters or back in the pockets of consumers.

On the other hand, as a consumer, I object to the idea that I could be forced to pay for a signal I get over the air for free. It’s like adding a surcharge on an air conditioning bill for the oxygen. My cable company doesn’t “take” or “sell” CFCF programming, it simply retransmits the station’s signal to my television set (should broadcasters also demand fees from antenna manufacturers?) And my solution to the disparity between cable channels and conventional broadcasters would have more to do with eliminating cable subscription fees altogether, except for channels like HBO that provide a large amount of original programming.

What is “local television”?

Besides, what exactly are we saving when we talk about saving local television anyway? There is no local television production besides the newcasts anymore, at least not in Montreal. Where once you could count on your local station to carry the Christmas or St. Patrick’s Day parades live, now they produce five-minute packages for the evening news. Current affairs, entertainment, consumer affairs and other programming has been merged into mid-day and weekend newscasts on shoestring budgets. Even local sports teams can’t get their games televised on local TV. They have to hope they can get a spot on the schedule of TSN, RDS or Rogers SportsNet.

But what exactly do we get on local newscasts? We get:

This isn’t to bash CFCF, which produces the best of Montreal’s three anglo newscasts (and has the ratings to show for it). But they want us to pay for this in addition to seeing all the advertising?

This slick marketing campaign really rubs me the wrong way. It’s a giant corporate behemoth owned by an even more giant corporate behemoth, and it hasn’t exactly shown a commitment to local television in the past. What was once a member-owned collective of television stations across Canada has since been bought up by a corporate profit-seeking enterprise that has imposed its power on local stations. CFCF Television in Montreal was forced to dump its iconic logo and rename its signature newscast solely to please the whims of head office that wanted all the stations in the network to look identical.

Now, suddenly, it’s in CTV’s interest to get people to feel nostalgic about their local television station. So it created this campaign and setup this website, which has cookie-cutter versions for each CTV and A-Channel station (it even has a French version which is actually mostly English). They’ve produced 30-second ads where community leaders read from nearly identical scripts that give vague references to how important local TV is in promoting local events. They’re running ads on local television stations and even arranging one-sided fluff interviews with their news employees. 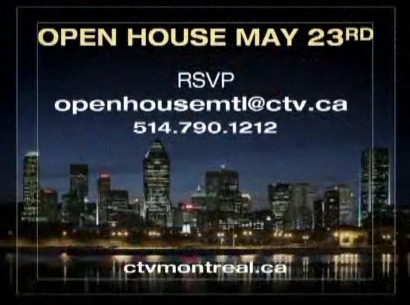 They’re also organizing open houses next weekend at all their stations. CFCF, which has offices at Papineau and René-Lévesque, will be open as of 9am on May 23. People who want to visit are asked to call or email to “reserve your tour.”

Whether or not you agree with or even care about this issue, this is a rare opportunity to see what it’s like inside a local television station and meet some of the people you see on air. I’d recommend against passing this chance up.

How to get me on board

I want to see their numbers. All of them.

The CRTC has moved to increase such transparency in reporting of financial information, but that has met resistance from broadcasters who argue it may expose trade secrets.

If CTV wants my support, they have to get over that paranoia and let the public see those numbers. How much are senior executives getting paid? How much does their Canadian programming cost? How much are they spending on public relations and marketing? How much of the cost of importing U.S. programming is shared with the cable channels that also broadcast it?

These are questions I’d like answers to before I start pressuring my MP.